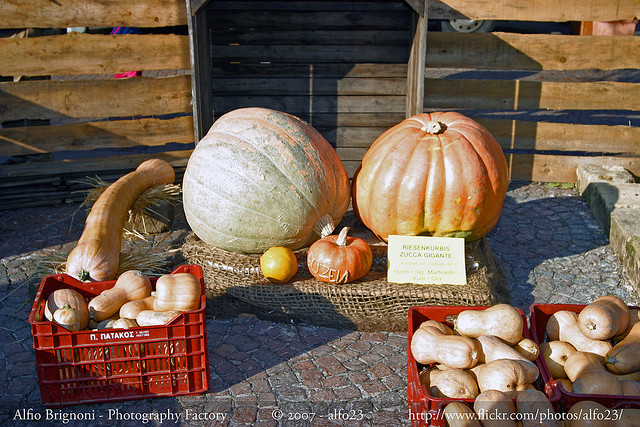 Nature keeps offering its bounty when the cold comes, too. Juicy peaches and colorful Summer berries may no longer be in season, but it doesn’t mean there isn’t plenty of great produce to enjoy during Autumn.

Of course, what Mother Nature bestows on us all is similar in many parts of the world: it depends on climate, not nationality, but the way each and every place enjoys seasonal fruits and vegetables do change on the  basis of tradition and culture. So, of course, our typical Fall products are known in other parts of the world as well: from mushrooms to chestnuts, from pumpkins to wines, we share a love for these autumnal gifts of the land. What changes is, well, the way we cook them and eat them. If many of these dishes may be known to you, others are more curious and you may not have come across them yet…take a look!

Mushrooms are more than a quintessential Fall food, they define the season by their very existence, as they are central to so much autumnal activity. Mushroom picking is, in Italy, as loved as mushroom eating. Of course, you need to know about mushrooms before venturing in the woods and get to work, because there’re some pretty poisonuous varieties out there and you don’t want to stick those in your risotto.

That said, “raccogliere i funghi” is a favored Fall activity in Italy, practiced a bit everywhere in the country, provided there is woods nearby. Once mushrooms get in the kitchen, they become protagonists of so many recipes it’d be impossible to mention them all: “funghi” are kings of sauces, but also fantastic served as a stew, or battered and deep fried. Of course, we’re talking wild mushrooms here, and each variety is particularly good for something: porcini are great in sauces, fried and preserved in vinegar, spices and olive oil (“in composta” we say in Piedmont); royal agarics (ovuli in Italian) are great eaten raw in salads; honey mushrooms (chiodini) can be used in stews and also preserved “in composta;” parasol mushrooms (mazze di tamburo) are delicious “al verde” and roasted with garlic and parsley; golden chanterelles (galletti) and sanguinelli can be preserved, used for sauces and also to prepare delicious mushroom stews. All of them are great as a base for risotti, of course.

Scientifically, truffles are also mushrooms: mushrooms that grow underground. We have talked about truffles at lenght in another article, so go check it out if you’re interested in the subject!

Pumpkins are more than a well loved Fall ingredient: their colors and shape are tied to memories of cool, thingly breezes in the street and hot cocoa by the fire. In the US, pumpkins are just as popular in the kitchen as they are in Italy. Orange, green, yellow; round, oval or irregular, pumpkins are as versatile as they are varied in shade, size and shape. In Italy, they’re used for every type of dish: luscious “primi,” such as ravioli di zucca (pumpkin ravioli) or risotto zucca e salsiccia (pumpkin and Italian sausage risotto). Autumn roast vegetables or ratatouilles would not be complete without pumpkin, nor would minestroni and other heart warming soups. Typical of Sicily is sweet and sour fried pumpkin, delicious on its own or served with meat. And when it’s time to have dessert, pumpkin can make a perfect one: famous in Italy is, for instance, la crostata di zucca, made with delicious pumpkin jam.

Chestnuts are popular everywhere in Italy, even though they are especially loved on and near the mountains. Once upon a time, they were the staple food of the poor and were cooked in soups or ground to make flour. Chestnut soups are still popular during the Fall in the Alpine regions: chestnuts are boiled, peeled and then cooked with fennel and water. Once ready, they can be enjoyed in their own broth, or drained and eaten with warm milk. Chestnut flour is used to prepare fantastic cakes and desserts: castagnaccio is famous pretty much everywhere in the north and central regions of the country, even though recipes may vary slightly from region to region.

To Italians, however, chestnuts are first and foremost caldarroste (roasted chestnuts). When caldarroste vendors appear at street corners, it means the cold season has finally arrived: sold in paper cornets, a bit like fish and chips in England, they warm your hands and heart on cold Fall afternoons. Their scent becomes that of the streets and, throughout the season, one may even forget to be in a big city and dream to walk in the peaceful, color-rich Italian countryside. Caldarroste should be made on the fire, using an iron, perforated pan, but they come out nicely also in the oven: just make sure to cut a small cross on their bottom (the pointy part) before baking them.

Apples are probably the most common fruit in the world and, even if they’re easily found throughout the year, they are naturally at their best in the Fall. Apple picking in Italy, just as in the US, is a true event in the areas where they are grown on a large scale, just as grape harvesting can be. Apples are used largely in the kitchen, especially in the north and not only for cakes and tarts: of the seven thousand varieties of apples in the world, more than two thousands are grown in Italy, so it comes as no suprise to know we cook with them so much.

Apples in Italy are used in salads and desserts, as you would expect, but also in risotti: famous is, for instance, the risotto con mele e lardo di colonnata (apple and lardo di colonnata risotto). When it comes to cakes, of course, apples are queens: Italy’s most common apple cake has very little to do with traditional American apple pie, and is more similar to a rich sponge cake, with hints of lemon and vanilla and plenty of sliced apples inside. Apples are also the main ingredient of the strüdel di mele, an apple and spices filled pastry typical of Alto Adige and, more in general, of German speaking countries.

Fennel (finocchio in Italian) belongs to the carrot family and can be devided in two large groups: common fennel and wild fennel. The first is used in the kitchen in its entirety, often raw in salads with boiled eggs and tuna, or simply with extra virgin olive oil as a dressing. It is delicious when baked, then sautéd with cream, or baked “alla Siciliana,” with besciamelle sauce and pistachios. It’s also delicious with a parmesan gratin. Adding some sliced fennel to roasting potaotes adds a slight sweetness to them, which matches the seasonal Fall atmosphere to perfection.

Wild fennel, known as “finocchietto,” is used as an aromatic herb: its flowers and fruits, commonly called seeds, even if they’re not seeds at all, are great both fresh and dried and are added to many dishes: in Sicily, finocchietto is added as an ingredient in sausages, and is fundamental to prepare the perfect pasta con le sarde. In the Marche, it’s used to cook periwinkles, in Lazio is essential to roast a delicious porchetta (roasted piglet). Fennel seeds and flowers, better if fresh, are used to cook chestnuts and also added often in castagnaccio.

Of course, there are other fruits and vegetables connected to the Fall we love and cherish in Italy. The first are certainly grapes. The Fall is the season of their harvest and, consequently, the period to make wine: because, of course, let’s not forget it, the Autumn’s when wine comes into this world each year. Even if you start finding grapes at the green grocer’s already in mid-August, most of the varieties used to produce wine are harvested in September.

Hazelnuts are also typical of the Fall: in my region, Piedmont, hazelnuts are a big deal, because they are a typical produce of the Langhe. We saw in our articles on chocolate how the “tonda gentile” variety is the one used to make gianduia chocolate and gianduiotti, but “nocciole” are also great as a snack on their own. They’re, though, chiefly an ingredient for cakes and cookies typical of northern Italy, such as baci di dama and the famous torta di nocciole, usually served with warm zabaglione.

Another typical thing we love to have during the colder months of the Fall and throughout the Winter in Italy is cioccolata calda con panna, hot chocolate with whipped cream. Mind, though, that Italian hot chocolate has nothing to do with what is found anywhere else in the world. What is normally called hot chocolate in the rest of Europe or the US, is known as “latte e cacao” or “latte e cioccolato” (milk and cocoa or milk and chocolate) in Italy. Italian hot chocolate is extremely thick and needs to be eaten with a spoon more than drunk. When I was a child, you could only find normal hot chocolate, but today many cafés offer a selection of flavors, including white hot chocolate and hazelnut hot chocolate. It’s a delicious and warming treat, especially if you have it with cookies!

The cold season may be knocking at the door, and days may be getting shorter, but who says that the Fall is not a beautiful, cheerful season? A well stocked larder and some recipes ideas are all you need to transform these long October evenings in something bright, fun, cozy and, of course, delicious.