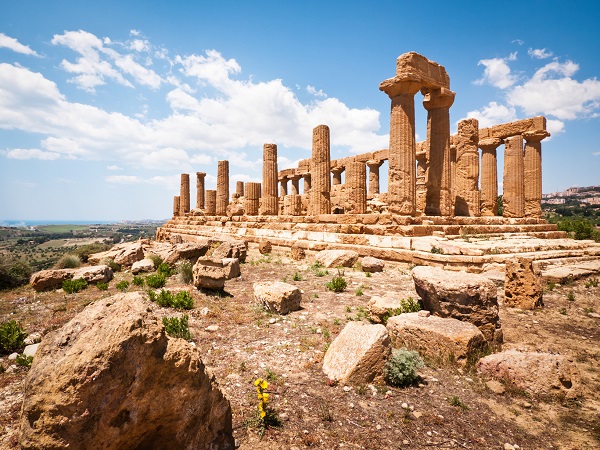 Agrigento is certainly famous for the production of its cannoli siciliani, cassate, and other local foods, but there is another thing this area is known for: almonds. More than the fruit itself, Agrigento is renowned for the festivals celebrated in its honor, a true touristic attraction with Sicily almonds. Two events are of particular interest: the Sagra del Mandorlo in Fiore and the Mandorlara (the almond on the table), both taking place annually between February and March (in 2017 the Sagra del Mandorlo in Fiore is from March 4 to 12 and Mandorlara is part of this event).

Agrigent and the Sicily almonds

The town flourishes in the month of March thanks to this event, where folkloristic groups and local products become protagonists. The Sagra del Mandorlo in Fiore, the blooming almond trees’ festival, used to take place every year in the first week of February but now it has been moved to March; it is an occasion to celebrate the coming of Spring: in balmy, warm Sicily, February and March are the time when nature wakes up in all its beauty and almonds trees, with their light pink, fragrant blossoms, make this magical moment of natural rebirth very special.

During the festival, the famous Valle dei Templi, framed by a mantle of almond trees, becomes a striking scenery for some of the most picturesque parades, with many other events taking place all over town.

The origins of the Sagra del Mandorlo in Fiore date back to 1934 when a village in the province of Agrigento, Naro, decided to create a local fair, which was named the sagra del mandorlo in fiore. Actually, it was count Alfonso Gaetani who had the idea: his aim was to celebrate the arrival of spring as well as to promote Sicilian food and Sicily almond.

The festival was later moved from Naro to Agrigento, taking the official and renowned name of Sagra del Mandorlo in Fiore. Since then, it has always animated the life of the town turning it into a widely known tourist destination. The Sagra celebrates local and international folklore, through parades, and food but it has also become the symbol of an important message: cultural peace among peoples in the world. The moment of the lighting of the fiaccola dell’amicizia, friendship torch, has become the emblem of its peaceful spirit.

The event of Sicily almond

The dates of the event change every year, but it is held in either February or March for about 10 days. The program may vary from year to year, but the activities offered are basically the same. It always includes shows and parades revolving around true Sicilian folklore, although in recent years the Sagra has opened up to performers from all around the world, in order to emphasize its positive message of multicultural, peaceful living.

The Mandorlara: the festival of the almonds in the kitchen

This event is organized in line with the Sagra del Mandorlo in Fiore by the hotel and restaurant owners of the Consorzio Turistico Valle dei Templi in the period of the festival. The aim of the Mandorlara is to delight and satisfy the appetite of tourists and locals alike, with delicious dishes all created with almonds. The prices of the menus change according to the restaurants and hotels but they usually range from 25 to 50 euros.

The Sagra del Mandorlo in Fiore is not only a festival but also an occasion to celebrate international folklore, visit the town, and obviously eat in what becomes the real home country of almond. That would be all for now about Agrigento, and Sicily almond festival.