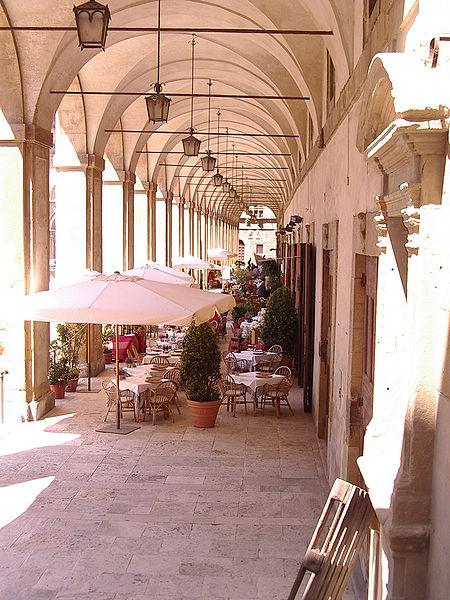 The Strada del Vino Terre di Arezzo traverses the Valdarno, an area characterized by wonderful gentle rolling hills, medieval villages, hamlets, villas and castles. This extensive Chianti sub-zone covers some 675 hectares of vines and is home to 86 producers, over 15 communes. The Colli Aretini wines have a unique character, which is typified by a bright violet hue due to the slightly acid soils of the area. According to Carlo Ferrini, winemaker consultant to “Tenuta Sette Ponti,” the wines have more length than width, with good body, yet not as full and round as other classic Tuscan wine-making areas.

In recent years, the area has attracted big investors such as the Ferragamo fashion magnate, owner of “Il Borro estate” who favours a modern, polished bordolaise blend to the traditional Sangiovese. Antonio Moretti of Sette Ponti has recently channeled his dynamic energy from the world of fashion to producing some of the areas top ‘crus’ with his Crognolo 90% Sangiovese and Oreno a blend of Sangiovese, Cabernet and Merlot.

Traditional quality wines can be found at the well-established estates of “Tenuta San Fubiano” with its classic Chianti Putto, “Villa La Selva” with its elegant Sangiovese, Felciaia and Petrolo’s Sangiovese Il Torrione and fine bottling of Merlot, Galatrona. New emerging estate “Mannucci Droandi,” producing a good organic Chianti Colli Aretini, Campolucci, has done extensive research into the conservation of old vine varieties of the area, setting up an experimental vineyard for micro-vinification.

Tuscan food is a triumph of nature: it is simple country cooking and it may lack a bit in imagination, but expresses an almost mystical symbiosis between a people and their land. The elaborations exported to France by the Medici are long gone and mostly forgotten. Also vanishing, sadly, are the inspired dishes that used to take cheerful Tuscan mamme all morning to create.

But the basics are still there: country bread baked in wood-fired ovens and the emerald-green extra-vergine olive oil that combines so well in bruschetta and pane unto; exquisite vegetables and greens that make a minestrone easy (Tuscans have always been more resourceful with hearty thick soups than pasta); rosemary, garlic, onion, sage, basil, bay leaves, and tarragon that heighten flavour; and, of course, the bean, so adored that when detractors couldn’t think of anything worse they called Tuscans mangiafagioli (bean eaters).

Tuscans are big meat eaters and Tuscan food is greatly characterized by grilled or roasted meats: chicken, pork, duck, pigeon and Florence’s legendary bistecca alla fiorentina (hefty slab of Chianina beef – a real one weighs about 1kg with bone and all). Boar and game birds are also prized in this most wooded Italian region. Some of Italy’s tastiest Pecorino cheese comes from sheep grazed in the stark hills of Siena.

Some of Tuscany’s most famous dishes and produce

Cinta Senese:  a special pig breed typical of Tuscany, and of the Siena region in particular, from which cured meats, as well as steaks roasts are derived.

Fagiolo zolfino: we mentioned Tuscany’s love for beans and the fagiolo zolfino is one of the region’s typical varieties, originary of the area around Terranuova Bracciolini.

Gramugia:  a traditional soup from the Lucca area, of very ancient origins. It mixes together onions, artichokes, fava beans, asparagus, and bacon.

Panzanella: a hearty salad made with stale bread soaked with water and crumbled with chopped tomatoes, onions, basil, oil, and vinegar in a sort of salad.

Pollo del Valdarno:  Valdarno chickens are a special breed typical of the Arno Valley, renowed for the tenderness of their meat.

Ribollita: hearty soup with beans, black cabbage, and other vegetables, thickened with bread.

If you are interested in Tuscany and more specifically in the Arezzo area, you should check out our other articles dedicated to this beautiful land: Arezzo ( Intro ) | Arezzo and Surrounding areas  | Nature Reserve in The Arezzo Area