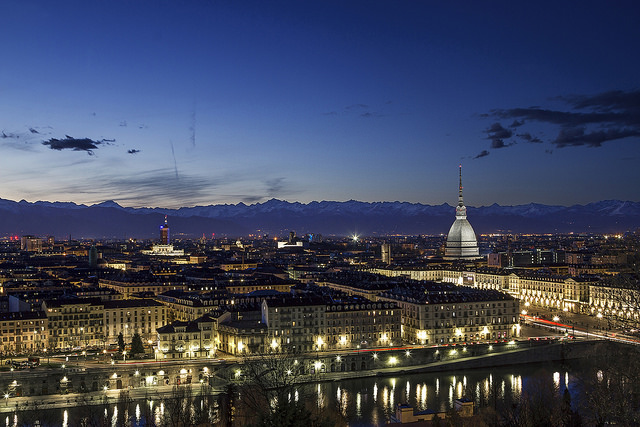 The history of chocolate production in Italy is long and eventful: delicious, creamy chocolate is one of Italy’s best known exports and even if we cannot consider il Bel Paese as its only producer in the world, we must certainly admit its chocolate is among the best.

Chocolate is produced pretty much everywhere in the country and the industry has, especially in recent years, developed a love for traditionally made, artisanal products: it seems it is, indeed, this trend to have kept Italy above many other chocolate making realities in the world.

What some may not know, though, is that more than one place in the country longs for the title of “Italian Capital of Chocolate“: Turin has, very likely, the best established chocolatier tradition in Italy, a tradition which goes back to the 16th century: from large corporations, to small yet highly skilled laboratories, Turin remains today a great contendant to the throne of Queen of Chocolate.

Perugia is Turin’s feistiest rival, its claims strengthened by the presence within its walls of one of Italy’s most famous chocolate brands, Perugina. Founded in relatively recent times, Perugina has nevertheless established itself as one of Italy’s best loved chocolate names and has given us some of the most iconic chocolate products ever.

In this delicious race, many forget about Modica and its traditionally made chocolate, created following the original Aztec recipe. Brought to Sicily by the Spanish, cocoa beans and the way to toast and grind them into a paste came directly from South America and make of the “cioccolato di Modica” the most famous chocolate still made with the Aztec method.

Where is the truth, then? Is there one, single capital of chocolate in Italy, or should these three beautiful cities share the prize of Queen of Italian Chocolate Making? An excursus, brief but we hope exhausting, about the reasons why Turin, Perugia and Modica claim the victory to themselves, should help us to make up our mind. But will it?!

To many, Turin is Italy’s capital of chocolate in name of a long and well established tradition in the production of the “food of the gods.” When thinking of Turin and chocolate, one cannot but utter the words “storia d’amore:” it seems that the very first to love chocolate were Turin’s own royals, the Savoias. Apparently, when the capital of their kingdom was moved from the Alpine dwelling of Chambéry to Turin, Emanuele Filiberto, ruler at time, symbolically offered a cup of hot chocolate to the city. Whether this is true or not, Turin kept her adoration for cocoa well alive. In the 18th century, Turinese people welcomed what was to become a symbol of the special relationship between the city and chocolate, the bicerín, a drink made of coffee, chocolate and cream. The bicerín, today considered a typical Piedmontese drink, is a heart-warming and delicious alternative to hot chocolate, a richer and creamier version of mocha.

As an incise, be careful when ordering it: another version of bicerín exists, an equally delicious gianduia chocolate liqueur, so make sure you specify what you are looking for.

Turin is home to the very history of chocolate making, as it was here that Pier Paul Caffarel, in the 19th century, began producing chocolates industrially, using Bozelli’s – another Italian – invention to make a cocoa paste with the perfect texture to create pralines and bars. At this stage, times were ripe in the Alpine capital for the birth of gianduiotto, one of Italy’s best known chocolates, the very first to be wrapped in its own paper. Gianduiotti, which are made with cocoa and hazelnuts from the Langhe, get their name from Gianduia, Turin’s beloved Carnevale’s character.

Caffarel and its gianduiotti are only the first of a plethora of excellent chocolatiers who made Turin their home: around the same time Peyrano, Baratti & Milano, Streglio, Feletti, Giordano all started operating and are still today among Italy’s best known and most renowned chocolate producers. It is not only a matter of corporate chocolate production, though: today more than yesterday, the world of Turinese chocolate is led in excellence by smaller, often family run realities, of which Stroppiana, Pfatisch and Gobino are well known representatives. It is good to remember that the entire Piemonte has a special love and predilection for chocolate making: from here are also, Venchi, Ferrero and Novi, well known chocolate producers around the world.

Today Turin – and Piemonte in general – is considered one of the world’s main chocolate producing districts, a fact also proven by the presence of a popular chocolate festival, CioccolaTò,  taking place in the city every year since 2003.

If Turin’s relationship with chocolate is all about tradition, that of Perugia is more recent, but certainly innovative.

The history of chocolate making in Perugia is tied indissolubly to that of Perugina, which remains one of Italy’s best known chocolate makers, especially abroad. Perugina was born in 1907, the brainchild of Francesco Buitoni, Francesco Andreani, Leone Ascoli and Annibale and Luisa Spagnoli. The latter became an icon of Italian business (she created, beside Perugina, also the fashion brand carrying her name) and is the mind behind the Bacio Perugina, possibly the most famous Italian chocolate in the world: a crunchy hazelnut, surrounded by hazelnut praline, all covered in dark chocolate, this was the original Bacio, which today also comes in milk and white chocolate varieties.

What makes Perugina so essential in the history of Italian chocolate making has always been its sense of innovation: among the first companies to understand the importance of associating its own name to whatever is popular and trendy, Perugina created and became the sole sponsor of the “Coppa della Perugina,” which remained the most important Umbrian car race for the whole 1920s. Later, during the 1930s, a period where Italy’s autarchic choices had already begun to be weight upon people’s life, Perugina sponsored a prize winning competition during Italy’s best known radio show. This was the perfect way to get people to buy its products in a period when sugar (essential ingredient to make chocolates!) was heavily taxed by the state and Perugina’s sale had started to plunge as a consequence.

Perugina is, ultimately, the most important chocolate brand of Italy, even if it may not be the most prestigious or the oldest, because of its widespread international presence and large availability. Perugina was the first Italian chocolate company to export to the US, and it created a real tradition with its Baci chocolates, in a way not even the historical gianduiotto di Torino managed to do. Baci are the quintessential Saint Valentine’s day gift and have reinvented themselves as the epythomy of sweet gestures between people who love each other. Their silver foil wrapping, covered in blue stars, is almost as iconic as the chocolate itself and the idea of including in each piece a little slip of paper with sweet words of love taken from literature or folk wisdom (in 4 languages!) has, in time, become object of collectionists’ attention, literary inspiration and more.

Just as Turin, also Perugia has it very own chocolate festival, the internationally renowned Eurochocolate, taking place each October.

If we are looking for the first place chocolate was produced in Italy, then Modica is our destination. The cioccolato di Modica is the closest thing we have today to the original concoction Aztecs produced with toasted cocoa beans. The Aztecs toasted the beans on a curved stone called “metate,” where they were then ground into a paste, to which spices such as vanilla, cinnamon and even chilli were added, along with mais and some water to allow solidification. Once the mixture became hard, it was used to make a drink called xocoatl.

This ancestral recipe was, it seems, brought back to Europe by Hermes Cortès. The Spanish should be considered the first to have imported cocoa to Europe and, certainly, to Sicily. During their domination of the island, in the 16th century, they brought to Modica the raw material and the technique to produce true, Aztec chocolate. Contrarily to what happened in the rest of Italy, in Modica, chocolate was never to be produced industrially and it remains still today among the most truthful vestiges of Aztec chocolate existent.

It is a hard decision to make: Turin, Perugia or Modica? Well, each of these cities does have all that it takes to win this hypothetical prize: Turin is probably the one with the best established tradition, both from an industrial and artisanal point of view. Modica is where, very likely, cocoa made its entrance in Italy, Modican chocolate representing the closest thing we possibly have to the original Aztec mix (along with Mexican chocolate, of course). Perugia’s tradition is more recent, yet is based on a company that made Italian chocolate known everywhere in the world more than any other.

Personally, I tend to think Turin may be the winner, but many of you know I am Piedmontese and may consider my choice biased… What’s your pick, then? Which is the true Queen of Chocolate of Italy?