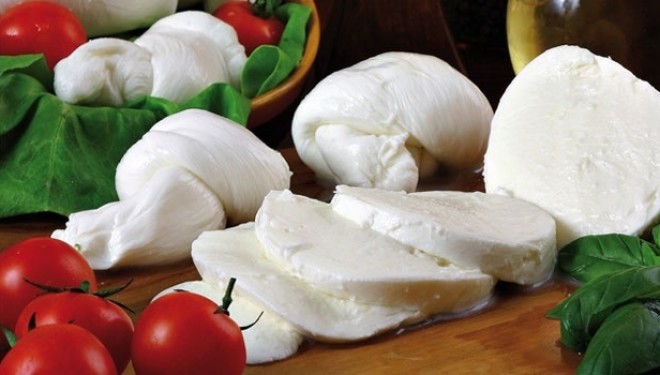 by Alfredo Iannaccone
Disrespect of laws related to the production of buffalo mozzarellas (mozzarellas were made with ordinary milk mixed with buffalo milk, and some was even imported from abroad), as well as blatant disregard to health and hygiene regulations:  these are just two of the irregularities which the Cantile di Sparanise Dairy (Caserta) have been accused of. The dairy produced buffalo  mozzarellas, a product possessing D.O.P.,”protected origin denomination, ” a tag that implies all ingridients have to be local, certified and matching the original ingredients.
The operation that brought to the surface these irregularities has ended with the arrest of 13 people, as well as the seizure and consequent closure of the dairy and its six selling points. Veterinary doctors of the ASL (the local Health Authorities) in charge of verifying controls are also involved.
According to the results of the investigation, the milk used for the D.O.P. buffalo mozzarella of the Cantile Dairy failed to undergo all the necessary health checks: sample tests of the milk stored in the silos revealed a presence of bacteria at least  two thousand times superior to that allowed by law. “So much so  the product can be considered dangerous for public health”,  Raffaella Capasso, public prosecutor of Santa Maria Capua Vetere, has written.

The Cantile Dairy’s violations not only damage the 1,500 dairy farms legally producing buffalo mozzarellas, but also degrades the imagine of a product that has a turnover of 71 million euro per year, also thanks to its high exporting value. This is what the Coldiretti (an institution that protects and acts on behalf of agricultural activities in Italy) declares, while expressing admiration for the operation carried out by the Carabinieri of Caserta, coordinated by the prosecutors of Santa Maria di Capua Vetere that, we have seen,  led to the interim notification of 13 people including owners of the farms, biologists, veterinary surgeons and lab technicians.
Faced with this episode of product adulteration, the Coldiretti has revealed a very serious lack of responsibility on behalf of the competent authorities for not yet having seen to the formulation of rules regarding the legal measures to be taken concerning the production of certified D.O.P. mozzarella. The only regulation available at the moment is a  disposition dating back to 2008, which has never been, however, officially approved. This means it cannot be forced into application.
It seems that multinational retailers already knew about the irregularities in the ingredients used in the production of Cantile’s mozzarellas:
“Auchan and Monoprix have complained because they have discovered cow milk in the buffalo mozzarellas”
“No, it’s not true, there has been a mistake”
This is the exchange, intercepted by the Carabinieri of Caserta, between Guido Cantile and his agent in Bologna,  responsible for the sale of the D.O.P. certified mozzarellas  to the above mentioned retailers. They have revealed to the Carabinieri of Caserta (public prosecutor in charge of the case, Federica D’Amodio) the illegal way by which the manager used cheaper ingredients  to lower  production costs and increase profit.
This episode has been revealed during a press conference held today in the Law Courts at Santa Maria Capua Vetere (Province of Caserta). The two multinational retailers had noticed something was wrong and had analysis carried out,  which revealed that the mozzarella Mr. Cantile declared was certified  D.O.P. wasn’t so, because produced with both Campania’s buffalo milk and cow milk.