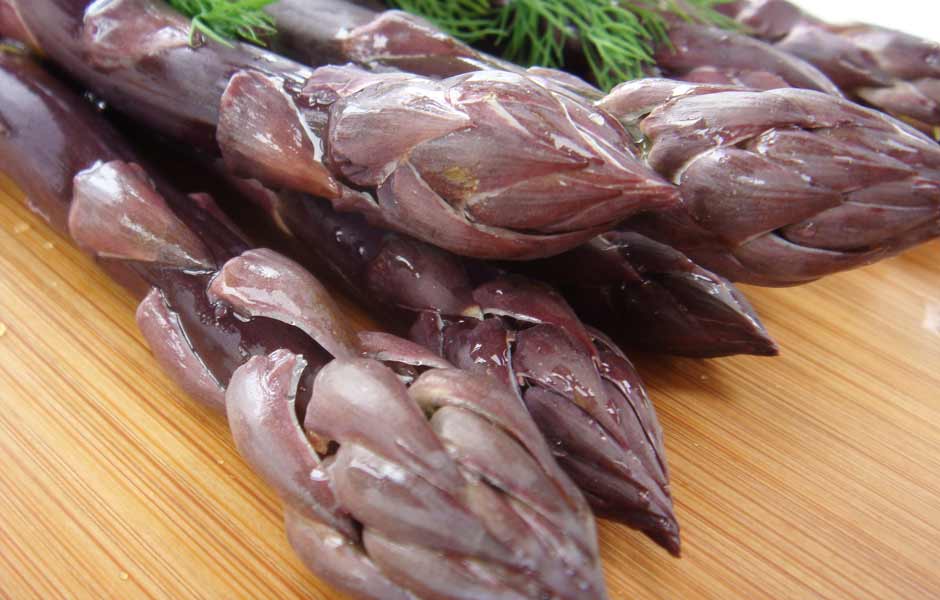 by Alfredo Iannaccone
Unmistakanble in its looks, characterized by large, deep violet shoots, gradually turning lighter in color towards the base, the Violet Asparagus of Albenga is protected by a presidio Slow Food, in name of its relevance in local, traditional cuisine and its unicity. The Violet Asparagus of Albenga is a unique variety that can’t be found in the rest of the world. Its strange colour doesn’t depend on cultivation techniques, but rather on its biological genetic heritage. There is a scientific reason for this conservation of purity: the asparagus has 40 chromosomes instead of the 20 possessed by all other asparagi, and because of this it cannot be crossed with any other variety.
In California, some experts made an attempt to patent it, while some of the world’s best agronomists have tried to cultivate it in New Zealand, in Australia and in the United States, but the results are not worth mentioning.
The flood lands of the Piana di Albenga, on the other hand, are perfect for its cultivation,  thanks to a deep sandy layer of top soil and an amazing microclimate. Unfortunately, however, ligurian farmers have today almost abandoned its cultivation, which used covered more than 300 hectares of land in the 1930s.
This type of asparagus need to be planted carefully by hand, and is harvested from the middle of March, up to the beginning of June: this means it arrives late on the market, which is by then already flooded with asparagi of diferrent types, both locally grown and imported.  Since time immemorial, farmers have tried to anticipate harvesting: once upon a time,  they used cotton waste (from the cotton mills) soaked in water to heat up the soil. Today, more modern methods are used, such as warm water pipes laid in the ground.

The most suitable preparation for this soft and buttery asparagus (which has none of the fibrous texture of its colleagues) are those which exalt its delicate taste: don’t choose heavy sauces and don’t overcook it. Use if fresh, avoiding long permanence in the fridge or, worst still, in the freezer. Violet asparagus should be delicately boiled for the shortest time and seasoned with pure olive oil:  they offer unimitable aroma and a taste which is a perfect match for delicately tasting food such as  boiled, steamed or baked fish and white meats.