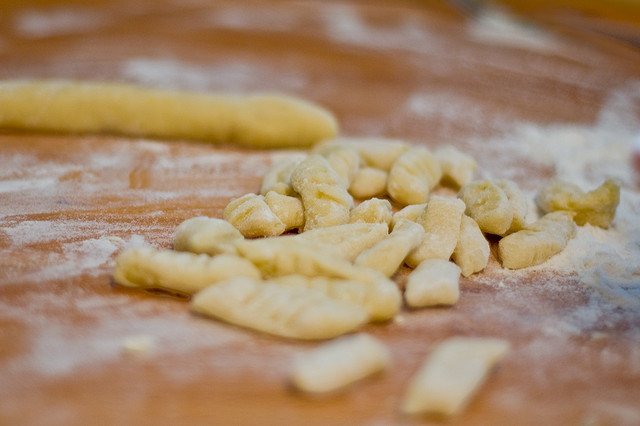 It seems that nearly every nation has some form of dumpling, and it’s easy to see why. They are tasty, versatile and make excellent use of leftover ingredients. In Italy, dumplings are collectively known as gnocchi and are made in several different styles – all of them delicious. In the family run trattorias of Rome, you can sample some of the best gnocchi every Thursday night, in a citywide tradition. Florence is home to gnocchi so good gluttonous priests have been known to choke from eating them too fast, hence their name, the infamous strozzapreti (priest-stranglers). Gnocchi is just as easy to enjoy at home using very basic ingredients or can be bought frozen or vacuum-sealed at the supermarket.

The word gnocchi means “lump” or “knot” and is originally a Germanic word that may describe the distinctive shape of gnocchi. And just like most of Italian cooking, these delicious lumps do not just vary from region to region, but from household to household as well, depending upon what is available. However, the most common way to prepare gnocchi is to combine potatoes (boiled, peeled and mashed) with flour to form soft bite-size lumps of dough. Each gnocco is then ridged along one side like a seashell; this gives the sauce a surface to cling to when eating. Gnocchi also come in different sizes, with gnocchetti being the smallest version.

Other types of gnocchi are made with semolina flour, milk and cheese – also known as Gnocchi alla Romana. Some versions are made with regular flour and other kinds can be made with leftover bread. Florence’s strozzapreti are gnocchi made from a combination of spinach and ricotta that, as stated earlier, are good enough to choke a priest (although there are no confirmed reports of this). Another famous spinach/ricotta gnocchi recipe is Lombardy’s malfatti meaning “malformed” since these gnocchi are made from leftover ravioli filling and do not have uniform shape of other varieties. What makes gnocchi so popular is their versatility – simple ingredients like potatoes and semolina flour, vegetables, mushrooms and cheeses can be combined to make gnocchi in endless variations.

Most gnocchi recipes require cooking similar to pasta, but quicker. Using a large pot filled with boiling water drop the gnocchi a few at a time to avoid sticking. After only a few minutes the gnocchi will start floating to the surface, use a slotted spoon to remove them and place them in a heated serving dish before adding the condiment or sauce. Other gnocchi recipes such Gnocchi alla Romana, which use semolina instead of potato, bake the dumplings in the oven layered with cheese until golden brown.

When it comes to sauces for gnocchi, almost anything is acceptable from butter and sage, to a rich cheese sauce (such as gorgonzola), tomato sauce or even pesto. Gnocchi goes equally well with a rich meat ragù of lamb and especially veal.

While gnocchi are simple enough to make from scratch, there are several varieties that can be found pre-made in supermarkets or in Italian specialty shops. Pre-packaged gnocchi, depending upon ingredients can be found fresh (refrigerated), frozen or dried. If you are lucky a local Italian delicatessen may even make their own, which would be far superior to anything found in a box or bag.

However, pre-packaged gnocchi should not be avoided, since there are a few very good brands. When buying gnocchi in store, look for the “fresh” looking kind in the refrigerated section (usually next to the fresh pasta), preferably in a well-sealed or vacuum container. The package should be heavy for its size as dense gnocchi will be less likely to fall apart when cooking. There are also several brands of frozen gnocchi that cook up well so long as they remain frozen before dropping them in the boiling water – they will turn into soggy mashed potatoes if allowed to thaw.

Gnocchi in the dried pasta section is usually of the semolina variety, but you may also find vacuum-sealed potato gnocchi as well. Dried semolina gnocchi are convenient and can be tasty, but its taste and texture resembles more of a pasta than fresh semolina gnocchi. With dried potato gnocchi, there just does not seem to be enough moisture left in the dumplings, making them lighter than other varieties. Because of this lack of moisture, the gnocchi tend to fall apart somewhat and often loose their shape. The rule of thumb for buying gnocchi is this: get the closest thing to making it yourself – fresh, refrigerated, or frozen.

Gnocchi are both delicious and very filling, making great use of just a few ingredients in near limitless ways. Gnocchi go well with just about any sauce and can be served in place of a pasta course or in a meal by itself. In fact, gnocchi are often so good they can be a little addicting – just remember not to eat them too fast like the priest in Florence.

I accidently made Gnocchi as I was making my egg noodles from scratch have since I was very young ran out of flour had a few potatoes( mashed) so added that and some cheddar cheese, some spices and herbs and garlic & onion put them in my chicken broth cooked them the reason I made little balls is my stomach was a little upset I needed to get them cooked. My family loved it I had to wait a couple of weeks as I had the flu