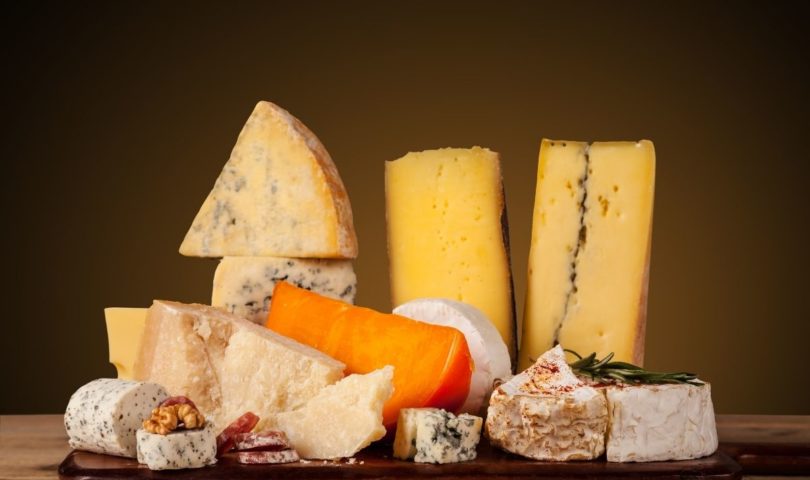 Love it or hate it, cheese remains the king of Italian tables. We eat it every day, with bread, with pasta, on its own. Aged or fresh, hot or cold, as an ingredient in complex dishes or on its own. We eat it while feasting and we eat it while dieting. We use it to make anything and everything, from starters to desserts,  and it ends up on our plates at all times of the day, from breakfast to aperitivo. Within this post, we’ll have a look at the Medieval history of cheese in Italy.

Cheese has a history as long and ancient as that of Mankind: specialists believe prehistoric man discovered by chance how to produce it and we never quite stopped since then. The Egyptians were quite fond of goat cheese and mentions of cheese are found also in the Bible. The Greeks and the Romans loved it and produced it in large quantities.

History of cheese in Italy

Yet, Italians got serious about cheese for real in medieval times, when some of our best-loved cheeses were created and cheese truly became the staple of our cuisine. It’s a story of monks, hermits, and taxes. A story that begins on the humblest of Italian tables, rose to royal popularity, and has been continuing today. So, what is that we need to know about medieval cheese and the history of cheese in Italy?

Italian cheese in the Middle Ages

Or the story of Italian cheese, of its monks and … cows

Even the Italian word for cheese, formaggio, finds its roots in the Middle Ages. Linguists underline it became common in the 13th century and that it originated from the Old French “fromage,” itself  loaned from the late Latin term “formaticum,” which means “put into shape.” In those times, every household in the countryside produced cheese. Sheep, goats, and cows were invaluable patrimonies for farmers, who would very rarely kill them for meat, preferring to take advantage of their virtually endless milk production. Truth is that, however, milk was barely consumed as such, and was almost entirely used to make medieval cheese, which was a nutritious, cheap, and easily available source of proteins.

It was particularly popular in our northern regions, but well known in the South, too: the famous Salerno school of medicine, the most ancient medical school in the world, already discussed the virtues and, alas, dangers of consuming too much cheese between the 12th and 13th century, suggesting to consume it in small quantities.

Difficult to follow their directives, however, for the hundreds of thousands of people who didn’t have the money to put meat on their table on a regular basis. Medievalist and food historian Massimo Montanari, cited in a very interesting article from Italian history monthly Focus Storia, emphasizes how cheese was mentioned incredibly often in medieval documents, proving how common a food it was and how profoundly tied to the socio-cultural fabric of the country it already was in those centuries. What more we need to know about the history of cheese in Italy during the Middle Ages?

Popular as it was, cheese would have remained the food of peasants and farmers, were it not for the ingenious ways of Northern Italian monks, inventors of the emperor of cheeses: grana. We have to ideally travel to the fertile plains south of Milan, sometimes after the year 1135, when the Abbey of Chiaravalle was founded.

Here, Cistercian monks began an extensive deforestation process to turn woods around the abbey into farmland, which they supplied with plenty of water thanks to an advanced irrigation system. With such a wealth of space and forage at their disposal, the monks increased their cattle numbers, ending up with large quantities of milk. But what to do with it, how to preserve it? Well, doing what everyone else around there did, you may think: making cheese.

You’re right, but things weren’t so simple. Up to then, production was limited to fresh cheeses which, albeit lasting much longer than milk, still had a pretty limited shelf life. Mind, not that medieval spoiled cheese was such a bad idea: legend says that the coming to be of gorgonzola, Italy’s best known blue, happened quite by chance sometimes between the 10th and the 12th century when a bunch of stracchino wheels got moldy.

That wasn’t the monks of Chiaravalle’s cup of tea, though. Being known cheese producers, they had an idea: cooking milk curd for long to obtain a thicker cheese that could be matured and preserved for longer. They called it caesus vetus (mature cheese, quite literally), we know it today as grana padano.

Cheese: the food of monks and farmers. Or so it was at the beginning, in the Dark Ages. Soon enough, though, even the wealthiest of lords ended up with a slice of cheesy goodness on his brocade-clad tables. Farmers almost never owned the lands they worked and had to pay rent. More often than not, this wasn’t done with money, but with products and foods: thanks to this, cheese made it onto the table of Italy’s rich and famous, who couldn’t have enough of the deliciously tangy thing, once upon a time considered a lowly, undignified product.

Some last curiosity about Medieval cheese

… And so it goes the story of Italian cheese and of how the medieval mind made it famous. Come here, though. I have some more curiosities for you:

…in conclusion about the history of cheese in Italy

While the history of cheese in Italy can be dated back to antiquity, the Middle Ages marked the turning point for the development of  Italian cheese tradition, to the point we can really talk about a “medieval history” of Italian cheese. It is during these centuries, especially within the quiet and peace of monastic communities, that many of our beloved formaggi, including grana, parmigiano and mozzarella, was created. All hail medieval monks, then for their lasting contribution to Italian cuisine!

If you would like to read the original article which inspired this piece, look for the well documented research by Daniele Venturoli, published on the Spring Edition of Focus Storia Collection.