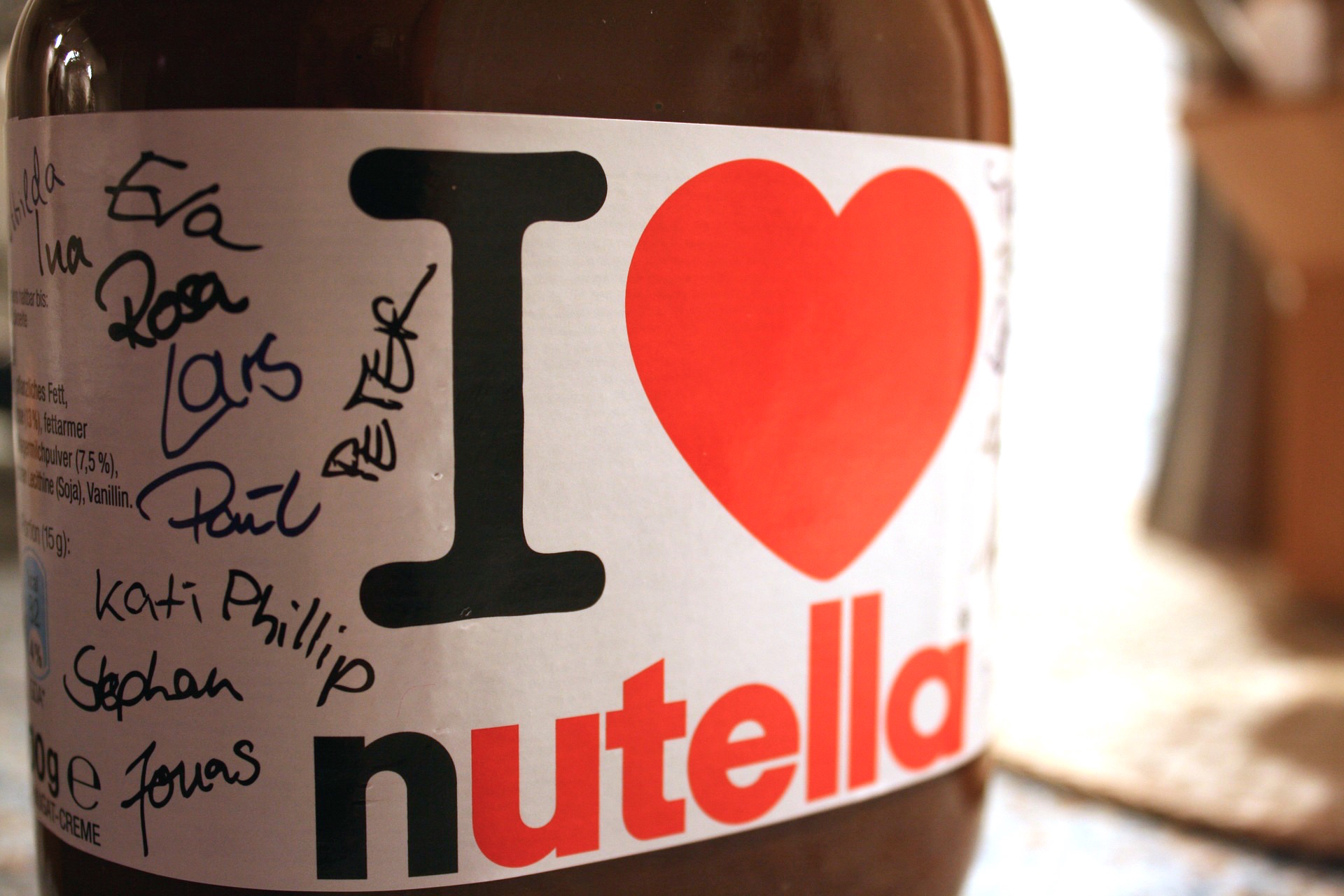 Nutella is more than a chocolate spread, it’s comfort in a jar. When you’re a child, a slice of bread loaded with the stuff makes the best treat. When you’re a teenager, you only need a few heaped spoons of it to forget about all those injustices and unrequited loves. As an adult, it becomes the perfect ingredient for quick, yet always successful desserts and… well… the spoon and jar trick, if you have a particularly sweet tooth as I do, remains a pretty common option to fill evenings spends watching tv.

Whichever way to eat it one chooses, I think it’s virtually impossible to find someone who doesn’t know or never tried this famous Ferrero product which remains, in spite of numerous imitations, some of them pretty darn good, let me tell you, the most popular and sold among all chocolate spreads in the world.

Simple ingredients, yet a taste which is as unique as its name, recent years have been a bit rocky for Nutella: Belgian organic chocolate company Delhaize created a vast advertisement campaign where its own chocolate spread, produced without palm oil, was deemed better for health than palm oil containing Nutella creating, according to Ferrero, a detrimental effect on the wholesome image of the Italian product. The  EU court in Bruxelles had initially supported Delhaize campaign, refusing Ferrero’s damages claims, but the sentence was overturned at the end of May 2017, when the same EU court agreed with Ferrero this time, thus forcing Delhaize to stop the campaign and refund the piedmontese company.

Sure, palm oil is not a champion of healthy eating, even when it’s organic and fairly sourced, like that used to make Nutella, but let’s be honest, chocolate spread is hardly the thing you’d eat in large quantities if you’re on a diet or try to keep a healthy balance. So, yes: trying to advertise it saying it’s “healthy” seems a bit of an oxymoron, Delhaize.

Truth is there are so many chocolate and hazelnut spreads around, yet Nutella remains people’s favorite, its name used to indicate all brands by many. Yes, because Nutella is sweet and delicious and everyone knows it. It brings back memories of afternoons spent playing outside with your friends as a child and is able to gift each and every one of us with the slightly naughty, yet oh-so-satisfiying thought of sticking our index finger in it and eat it like that.

There’s more to it though, and you may not know about that: Nutella is a product with some history on its shoulders, rooted in the difficult Italian post war years, a period filled with hope and joyful expectations, but still pervaded with the gloom and pain 5 years of conflict are bound to cause. A child of the war, if you will.

We have no cocoa!

This is what Pietro Ferrero may have said the faithful day he got into his patisserie laboratory and set his mind on creating something new. You see, after the end of the Second World War, getting cocoa was not simple as it had been rationed for such a long time. People needed something sweet in their lives, though, so pasticcere Pietro concocted a special chocolate-like block, to be sliced and eaten on bread. It was made with a bit of cocoa (much less that what you’d need to make chocolate), sugar and an ingredient we have in large abundance in Piedmont, hazelnuts. The soft pat of sweet goodness was named “Giandujot,” after the name of Turin’s own Carnival mask, Gianduja and was an immediate hit. With its creation, we can say, Ferrero truly entered the chocolate making business, creating his own company on the 14th of May 1946.

“Giandujot” was a hit: it was cheaper than chocolate, could be eaten on bread and it was simple to dose, as you only needed to spoon or slice some onto a slice of bread. In 1951, Ferrero decided it was time to change the product’s look and began to sell it in glass jars with the new name of Giandujot Supercrema, the grandmother of Nutella.

Michele Ferrero, son of Pietro, who passed away in 2015, made Supercrema even smoother and changed its name into Nutella. It was 1964. Beside the new, smoother cream and its catchy name, Michele also came out with the idea of packing Nutella into reusable jars that soon became very recognizable: they’re the same we still see on the shelves today. In 1965 Nutella entered the international market for the first time, landing in Germany. A year later, it’s in France and from there everywhere else in Europe. In 1978, the first Nutella factory opens in Australia.

In 2014, Poste Italiane emitted a special stamp to celebrate Nutella’s 50 years: now, if that’s not being a national icon…

From then on, Nutella has gone strength to strength, becoming a household name everywhere in the world. A little tid bit: World Nutella Day falls on the 5th of February and it’s been created by an Italian American blogger, Sara Rosso. There’s, indeed, a bit of America in Nutella, too.

Nutella in the kitchen

Really, Nutella is great on its own and on bread or with breadsticks. But you can go pretty fancy with it too. One of my favorite recipes is “sbriciolata alla Nutella,” one of the easiest tart recipes you can come across. You just need to make crumble, just as you’d make it for apple crumble or apple crisp, cover the bottom of a cake tin with it, layer Nutella thickly on top of it and then cover it up with another layer of crumble. Bake as you would an apple tart and you’re golden.

I also love to use Nutella to make cupcakes. Simply stick a big jar of Nutella in the fridge and while it gets cool prepare your favorite cupcake batter (I like vanilla cupcakes best with Nutella, but it’s personal). When ready, fill your cupcake lining half way and top them with a dollop of cold, hardened Nutella. Then, finish filling up the cupcake lining with batter. If you want, you can add extra Nutella on top and swirl it around to give it a marble effect, but you’ll need another jar of warmer, creamier Nutella to do that!

More to create in cupcake world: Nutella is also perfect to make buttercream or even cream cheese icing, which means you can also use it, of course to bake cheesecakes. Another popular Italian Nutella recipe are easy-to-bake Nutellotti, made with Nutella, one egg and only a little bit of flour.