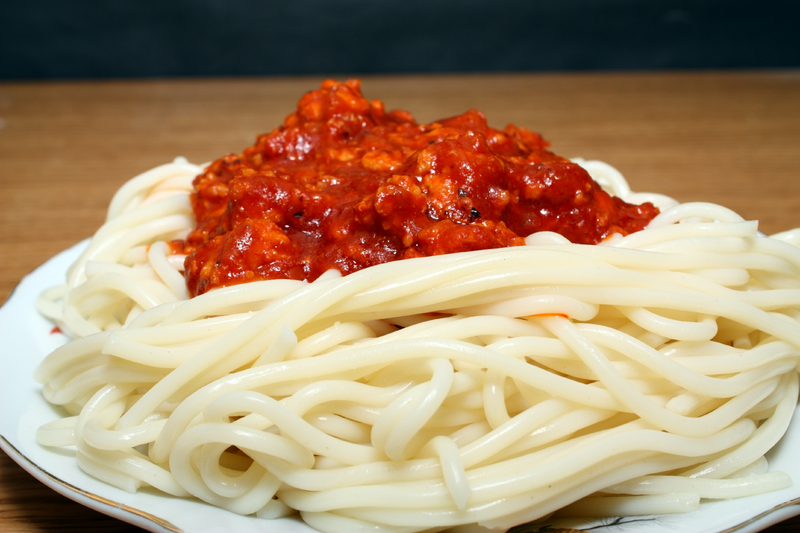 Knowing how not to cook pasta is even more important than knowing how to do it properly, believe me. What follows is a gallery of culinary horrors: pasta dishes gone horribly wrong. They may look good, even tasty to you, but believe me, no true Italian would ever prepare, or even eat, a dish of pasta like the ones you are going to see.

Cooking pasta is quite simple. We already gave you the step by step guide to cooking true Italian pasta.

The basic caveat and most common error is this: you do not cook pasta, serve it and then pour sauce over it. No. You don’t. What you want to do is mixing and stirring pasta and sauce together while they cook. This is not only a matter of taste – cooking pasta and sauce at the same time make the pasta absorb both sauce and flavor – but also of practicality: if you put the sauce on top of pasta and don’t eat quickly, pasta will become an inedible glue. Not to mention the fact that your spaghetti will look raw and uncooked.

Ok. That in the picture above should be a carbonara. Right? Wrong. What is that white stuff? Cream? Who puts cream on carbonara? Cheese (pecorino, or parmigiano if you can’t find it), egg yolks, cured fatty pork, and black pepper, those are the ingredients for a true carbonara. Carbonara is considered a traditional, poor cuisine dish, not fancy novelle cousine. An important point is that you mix the pasta with the sauce, not drown the spaghetti in it.

Look at the image above: is that soup? And the red stuff, is that tomato? Seems like tomato. Well, no tomato like that on my pasta, please! Not only is the spaghetti swamped in sauce, it also looks raw. This means that the spaghetti hadn’t a chance to absorb the sauce. I cannot – and truly do not want to – even think of how that stuff tastes.

This seems to be a favorite of American cuisine: spaghetti and meatballs. Ok, so you have probably heard about ragù, the kind of sauce we Italians make with tomato and minced meat. The point is: it should remain minced. We don’t prepare meatballs with it. A ragù is usually made by adding meat to a soffritto (a partially-fried mixture of chopped onions, celery, carrots, herbs and garlic), adding tomatoes and other flavourings. and then simmering for a long time. But no meatballs. Think about it: you are supposed to eat pasta and sauce with only a fork, so how can you swallow an entire meatball without cutting it with a knife?

This image is simply a nightmare. Meatballs again, yes. But there’s more wrongness in that picture. Look at the spaghetti. Spaghetti are called “long pasta” for a reason: cutting them in shorter bits is plain wrong, we don’t do that in Italy. If you want something shorter, we have short pasta for that, like rigatoni or fusilli. If you find it difficult to pick up long spaghetti with a fork, just practice. It ain’t that difficult and it’s much easier than eating chinese with chopsticks. Yes, you may shower yourself in sauce the first few times, but sometimes it happens to us Italians too, so no shame there!

Spaghetti as a fancy snack. Should I really comment? Plus, the pasta looks raw again. And to have the spaghetti stay in place like that, the cook must have surely used some kind of glue, like egg yolk. Or maybe he just let the pasta cool down without sauce and the noodles glued themselves to each other. Either way: no, that is not true Italian spaghetti.

And what about these spaghetti alla carbonara? They are wrong on every possible level. First: let’s hope that this picture comes from a photo shoot and not from a restaurant table. Everything seems so fake, the guanciale looks raw (now that you make me think about it, that doesn’t really look like guanciale at all), the parmigiano just lays there. Every Italian knows that the secret of carbonara is mixing, not just placing the ingredients one over the other. Otherwise, you won’t have a true carbonara.

And finally: this is how a plate of genuine Italian spaghetti looks like! Notice how the pasta and tomato sauce are mixed together. The spaghetti has absorbed the sauce and look like it has been flavoured from the inside. The pasta is not sparkling white or yellow – a color we associate with hospital food – but has an healthy and yummy reddish look, a sign that the pasta has really “taken” its sauce, as we Italian say. After having been dished, the spaghetti have been generously covered with freshly grated parmesan cheese. Notice how the cheese is melting: the pasta is hot, as it should be. Now this is a plate of pasta you really want to call all’Italiana!

See this video on how to cook spaghetti alla carbonara.

Your meatballs must be very interesting if you need a knife to cut them.