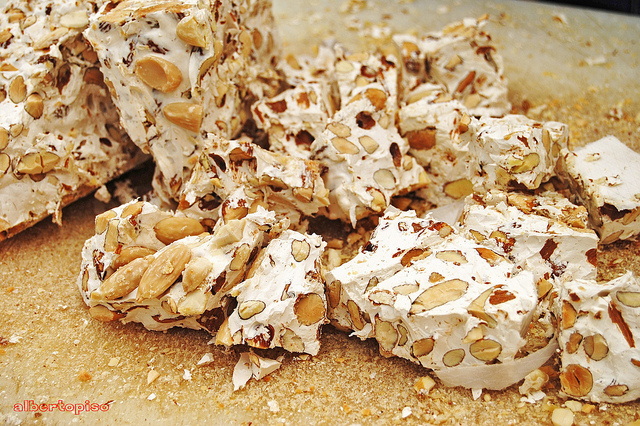 Sweet treats are a part of the history of Italian food, just as much as pasta and pizza are. For even the most disciplined traveler to Italy, it is hard to say no to all the delicious temptations that await. It seems that every bar, café or pasticceria has an endless display of cookies, chocolates or some other enticement. Italian desserts range in flavor from slightly bitter to sweet but usually not overwhelmingly sweet and are often best served with a wine.

Below is a small sample of traditional Italian favorites for those who love to indulge. Be prepared to sample dozens more that are not listed such as regional specialties and of course gelato. However if indulgent desserts are not your thing, keep in mind that many Italians prefer fresh fruit after a meal, which is often just as abundant as the sweets and used in numerous varieties of fresh fruit tarts.

A visit to any Italian bakery will show just how many flavors, shapes and colors Italian style cookies (which are called biscotti in Italian) come in. Many Italian cookies have a crumbly, slightly sweet flavor and a usually hard texture. What is known as “biscotti” in the US are Italian cantucci, slightly bitter cookies, usually served with red wine.

Italian patisserie goods do not only involve cookies, though: think of the magnificence and deliciousness of Martorana fruit, a typical Sicilian treat made of marzipan and shaped and colored to resemble real fruit. Martorana dough is made with almonds, but is somehow slightly less sugary and sweet than regular marzipan.

This aptly named “strong-bread” of Siena is a dense mix of almonds and candied fruit sweetened with honey and spices. Today you can find panforte all year round but it was traditionally a Christmas sweetbread. Today’s versions of panforte are lighter and sweeter than the medieval original, when panforte was made by pharmacists and nuns. Panforte is round and dense with several styles available, the most popular being the sweet “Panforte Margherita” and the bitter “Panforte Nero.” All varieties of panforte should be enjoyed with a glass of Vin Santo or another sweet dessert wine.

The most famous of the Italian Christmas cakes is Milano’s panettone. During the holiday season boxes of the famous cake can be found in Italian bakeries and cafés worldwide. The origin of the dessert is mysterious, with two competing legends involving a poor baker named Toni, giving panettone the translation of “Toni’s Bread”. However panettone probably dates to even earlier and denser medieval bread made from wheat flour named Pan del Ton – “luxury bread” in the Milanese dialect of the 13th century. Even today there is a flat version of panettone besides the more popular dome variety, which may be descended from this earlier Pan del Ton. Today’s varieties use an acidic dough and a multi day “proof” to give the panettone its trademark fluffiness and dome shape. Within its fluffy folds of dough panettone is flavored with bits of candied fruits and raisins. Slices of panettone can be served with Mascarpone cheese or zabaglione custard and accompanied by a dessert wine or liqueur.

Verona’s famous Christmas bread is known as pandoro and is characterized by its distinctive star shape. Modern pandoro is little more than one hundred years old, but has roots that may go back to Roman times. The name pandoro may derive from the fact that only the rich could afford sweet bread flavored with honey and made with white flour. By the time of the Venetian Republic, this sweetbread was taking on its characteristic flavor, using lots of butter, eggs and sugar. The shape of pandoro was an influence of the 18th century Austrian court, whose bakers would create holiday cakes shaped like a Christmas tree. Unlike panettone, pandoro traditionally does not have anything in the dough and is simply dusted with powdered sugar. However there are variations of pandoro with fillings such as custard or gelato that have become very popular.

This famous “pick me up” may have originated in Siena where it was first made for the benefit of Duke Cosimo de Medici. Both the Duke and others liked it so much that it caught on quick and spread along with Italian immigrants to the rest of the world. This story is debated especially in the city of Treviso where they claim the origin of tiramisù has a seedier past – as an energizing snack for weary prostitutes. Whatever the origins of this delicious treat, tiramisù just may be the most popular of the Italian desserts (excluding Italy’s great gift to mankind: gelato) and contains lady finger cookies, espresso, liquor, eggs, cocoa and mascarpone cheese. Those familiar with trifle style desserts will recognize the familiar layered texture of tiramisù, with the lady fingers dipped (but not soaked through) in strong espresso creating a delicious foundation for the other layers to be built upon.

This delicious and simple custard hails from Veneto (others argue Tuscany) and is made from egg yolks, sugar, and dessert wine. This is another dessert that has spread from its origins and takes on local characteristics such as toppings of whipped cream, shaved chocolate or even as a base for other desserts. When by itself it is often served warm, accompanied by a glass of Marsala wine, but also works well with just about anything – especially fresh fruit. Sometimes it is even drunk like eggnog; this may be the original way to enjoy Zabaglione.

This oddly named dessert is the Italian take on an English trifle – layers of sponge cake and custard or cream. How it got to Italy may be from English tourists visiting Tuscany in the 19th century where it took on a decidedly Italian flair with the use of zabaglione custard, candied fruits, Italian liqueurs and various shapes and sizes. It has since become very popular and is found nationwide and often served with a chilled local white wine.

Cannoli is the most famous of the Sicilian desserts and can be found in virtually every Italian pasticceria. This dessert is made by filling a hollow pastry shell with sweetened (or fresh) ricotta. Candied fruit and chocolate pieces can be mixed with the filling and the ends are dipped in chopped pistachios. At one time cannoli were a gift given amongst friends during Carnevale, but have since gained worldwide recognition and numerous delicious variations. You can try making your own by checking out our recipe for Sicilian Cannoli.

This favorite of the Palermo area is yet another culinary gift brought from the Arabs. Cassata originates from the Arabic al-qasat, which means “round bowl” and sort of describes the shape of the dessert. Cassata has changed away from Sicily to include custards, pudding or ice cream as filling. All of these variations are delicious, but the authentic cassata is made by lining a cake mold with layers of sponge cake soaked in rum or sweet liqueur. Then sweetened ricotta with bits of candied fruit peel, pistachios and chocolate bits is used to fill the cake.

Zeppole are basically “Italian doughnuts” and traditionally they are simply dusted with sugar and cinnamon or dipped in honey. Over time they have evolved to include a delicious cream filling and often covered with whipped cream. Zeppole are most often seen during Italian festivals especially St. Joseph’s Day, Father’s Day in Italy, on the 19th  of March.

This nougat confection dates back to Roman times and was used in religious ceremonies and later eaten during Christmas time. Torrone is made of various combinations of honey, egg whites and nuts like almonds, walnuts or pistachios and is known throughout the Mediterranean. However the torrone from Cremona is the most popular even today and dates to a mid 15th century wedding. The wedding between the powerful Visconti and Sforza families produced a spectacular dessert: a model of Cremona’s tower made of the delicious nougat that spread in popularity thereafter. Today torrone is synonymous with nougat to candy lovers worldwide and is still used to make magnificent sculpted desserts.

Chocolate has a long history in Italy, being documented within decades of its introduction to Europe by the Spanish. Today decadent chocolate is found in every corner of Italy with the most famous centers including Perugia, Tuscany’s “Chocolate Valley” and Torino, whose chocolatiers are constantly taking chocolate to new levels of indulgence. Some of the most famous chocolates in Italy include Baci, a dark chocolate “kiss” filled with hazelnuts and hazelnut creme from Perugia. In Torino the gianduiotto is a mixture of hazelnut paste, cocoa and sugar and was the first chocolate to be individually wrapped. Before chocolate was eaten, it was a drink and today the bicerin (layers of chocolate, espresso and cream) is still served in the same Torino cafe’ since 1763. During Easter, shops all over Italy will sell chocolate eggs. The smallest chocolate eggs are solid but the other sizes – including the enormous ones – contain gifts or individually wrapped chocolate treats. Italian chocolate can range from a very heavy cocoa flavor to a more creamy milk chocolate with added flavors including whole nuts or creams made from hazelnuts, almonds liqueurs or coffee. Nutella is a very popular chocolate and hazelnut spread used in breakfast foods and dessert fillings that is now available worldwide.