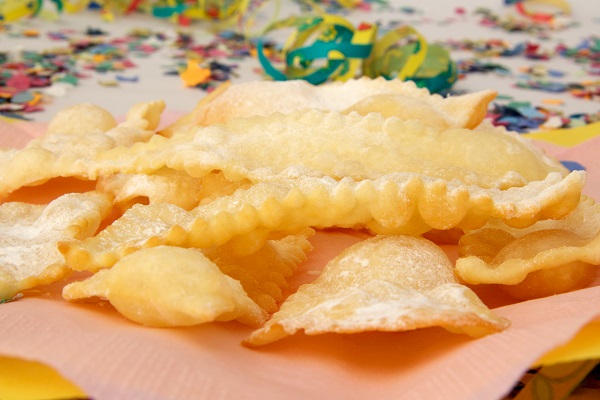 In Italy, Carnival is considered a good time to celebrate, have fun and, obviously, eating well. To this day, several typical recipes are linked to and served during Carnival time.

Known all over the Italian territory, they have acquired several names according to the regional area of production. Chiacchiere, bugie, cenci, guanti are only some of the numerous names referring to this type of deep fried, yet light pastries. In spite of the name differences, the ingredients and method of cooking are always the same: flour, butter, sugar and vegetable oil to fry; they look like little, puffy biscuits, but have the light, crumbly texture of puff pastry. They are honey-colored and served with a sprinkling of icing sugar on top.

Who doesn’t know lasagne? What many do not know is that, in some parts of Italy, lasagne is the most commonly cooked pasta dish during Carnival time. Though belonging to Emilia-Romagna’s culinary tradition, lasagne have been exported everywhere and they are often present on Italian tables in this period. In some parts of Italy, the traditional recipe is modified with some alternative ingredients; for example, in the south of the country béchamel sauce is often replace with ricotta.

This dish is typical of Naples and its surrounding areas and is cooked on Mardi Gras. It is a type of cake made with wheat middlings, milk, vanilla, butter, eggs, sugar, lemon and ricotta cheese. What makes a good migliaccio is high-quality ricotta, and this area is particularly renowned for this ingredient.

Some will be surprised to learn the main ingredient of this typically Carnivalesque dish, and the more impressionable among our readers will never have the courage to eat it. Sanguinaccio as the term itself suggests, has blood as its main ingredient. It is a sweet custard made with dark chocolate and flavored with fresh pig blood. This recipe has been associated to the region of Basilicata, but it is eaten in a lot of other Italian regions where it is often served on bread or on savoiardi, a type of Italian cookies..

Castagnole is another traditional Carnival dish. The main ingredients of castagnole are eggs, sugar, flour and butter. The ingredients are shaped in little balls, served with icing sugar; some Italians like to fill them with chocolate or custard cream.

Frittelle are small fried pancakes, similar to the Castagnole, but softer. They can be plain or filled with cream or raisins.

These are only some of the most common and best known recipes associated with Carnival all over the Italian territory. They are all so famous it is often difficult to place their origin: they may be called differently, but they are loved by the entire country. Next to them, you will always find the traditional ciambelle di Carnevale, or Carnival donuts, which are served without any icing, although some people like to offer nutella or chocolate as a dip.

Choose the recipe you like the most, but as a Carnival proverb says: “A Carnevale dalla frappa non si scappa” (At Carnival you can’t escape from frappe). In fact, you can’t spend a day during Carnival time without eating at least one of them!