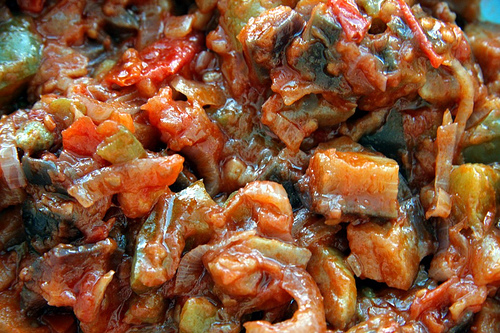 From the Pizza of Naples to the countless types of dried and fresh pasta, the food of the south is the soul of Italy  and it counts for a great part of the history of Italian cuisine. Here, you will find rich and spicy tomato sauces and the almost exclusive use of olive oil in cooking. In fact, some of the best olive oil comes from these regions, but very little of it is exported. The south is home to citrus fruits, fields of durum wheat for pasta, olive groves and vineyards. The sea is used to its fullest extent, with all manner of seafood enjoyed, from tuna to anchovies, from clams to sea urchins.

Italian food would not be the same without Campania‘s spaghetti topped with pommarola, the famous tomato sauce. Campania is also the birthplace of modern pizza, as the world’s first Pizzeria (still in business) started on the streets of Naples. The volcanic soils of Campania grow some of the best produce in Italy, including San Marzano tomatoes, peaches, grapes, apricots, figs, oranges and lemons. Campania’s most famous cheese is the Mozzarella di Bufala, made from the milk of local water buffaloes. Other popular cheeses include sheep’s milk Pecorino, Scamorza, Ricotta (both cow and buffalo versions), and Mascarpone. Parmigiano Reggiano has also found its way into the recipes of Campania, with meat and vegetable dishes served alla Parmigiana. Seafood is a staple of Campania’s coastline, with fish fried in olive oil a favorite of Naples, while other specialties make use of local octopus, cuttlefish, squid, clams and mussels.

The standout wines of Campania include the reds Taurasi and Vesuvio and the white Lacryma Christi and Greco di Tufo.

Food from Pozzuoli, Naples. Seafood farfalle and mozzarella stuffed with ham and vegetables.

The meat of choice in these Southern Italian regions is either lamb or kid and can be roasted, baked or grilled on skewers. Calabria is home to Capretto Ripieno al Forno, a roast kid stuffed with herbs. Pork is popular for local salame, with rabbit and beef also being appreciated. The Catanzaro area is home to Nduja, a soft spicy salami that can be spread on bread. Caciocavallo, Canestrato, Ricotta and Mozzarella are the most popular cheeses in these southern regions. Along the coast, seafood plays a major role in the diet, with favorites including mussels, oysters, octopus, red mullet and swordfish. Vegetables include fava beans, artichokes, chicory and various greens including rucola (“rocket”). Eggplants, peppers, lampasciuoli (a bitter type of onion), cauliflower, olives and olive oil are all southern staples. Regional pastas include orecchiette and bucatini, both served with tomato sauce or with olive oil, garlic and cauliflower.

Apulia is home to moderately priced wines such as the reds Castel del Monte, Primitivo and Salice Salentino.

The island is rich in fruit, with lemons, blood oranges, tangerines, olives, almonds, and prickly pears in abundance. Caponata is an antipasto made with eggplant, olives, capers and celery. Ceci, or chickpeas, have played an important role in Sicilian history and are well represented in the local diet. Panella is a thin paste made of crushed ceci and served fried, and maccu is a creamy soup made from the same bean. Pasta is an everday staple, and is often served with a rich spicy tomato sauce. Sicily also loves its seafood with popular dishes including grilled swordfish or snapper, finocchio con le sarde (fennel with sardines) and seppia (cuttlefish) served in its own black sauce with pasta. The best known Sicilian meat dish is vitello al Marsala (veal marsala) and is just one of many regional meat specialties that can also involve lamb, kid or rabbit.

The best-known wine is Marsala which is dark and strong, but Malvasia and the white wines of Etna and Lipari are also delicious.

Sardinia‘s bread is an excellent antipasto and really good with Sardinian sausages and sweet green olives. Spicy fish soups called burrida and cassola, along with lobsters, crabs, anchovies, squid, clams and fresh sardines, are very popular along the Sardinian coast. Favorite Sardinian pasta dishes include spaghetti con bottarga, with dried gray mullet roe shaved on top. Malloreddus is gnocchi flavored with saffron and served with a tomato sauce. Culurgiones are round ravioli stuffed with spinach and cheese. Sardinia is known for its rustic sheep and goat cheeses like Pecorino Sardo and Fiore Sardo, which can either be served fresh or aged. The Sardinian interior produces some of the best lamb in the whole of Italy, known for being very lean. Sardinians enjoy their meats roasted and porceddu, (Sardinian version of Porchetta) suckling pig or kid (suckling goat) is a favorite. It is traditionally roasted outdoors, over aromatic woods. Another renown Sardininan dish is the Casu Marzu.

Wines include the red Cannonau and Monica di Cagliari, with the best known Sardinian white being Vernaccia di Oristano.