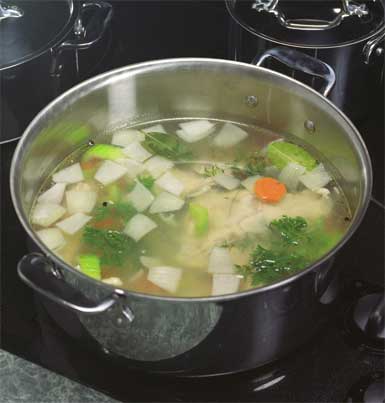 The cold virus is among the world’s most prevalent of wintertime diseases and its symptoms are among the most stubborn to cure. Just about all of us have suffered from the effects of a winter cold. Three quarters of the people in the United States have at least one cold a year.

The remedies to treat these symptoms range from antibiotics, antihistamines and analgesics. There are many alternative medicines used to treat the common cold. A wide variety of these medications and treatments include healing philosophies, approaches and therapies.

In my family, the cold virus was treated with a bowl of hot chicken soup. Can a little hot water, onions, celery and chicken broth truly be a medical treatment for the common cold? We know parsley contains chlorophyll, a traditional remedy to cure bad breath and to settle uneasy stomachs; carrots and celery are rich in vitamin A, so important for good eye sight and healthy skin and poultry meat is a good source of the B vitamins, including riboflavin, niacin and biotin so necessary to use oxygen and protein in the body.

For Grandma, cooking was a way to express her emotions; it represented her joy at living in a new land and the continuity of her family’s traditional recipes. It was these same recipes and beliefs that grandma past along to her daughters and her granddaughters.

To this day, the aroma of onions and celery boiling in a pot of chicken broth has a comforting effect on me.

Using a deep soup pot, submerge whole chicken in water. Add onion, celery, bouillon, salt and garlic, set parsley aside. Cook all together for 1 hour until chicken is tender. Turn heat off and remove whole chicken from soup pot. Let cool. Strain soup into clean pot. Press onions and celery firmly to extract all flavor when pouring through strainer. Put soup pot back on stove to boil. Add carrots and cook until carrots are tender. Skin and bone chicken, using only the best part of the chicken. Cut chicken into large meaty chunks. Add chicken and chopped parsley to soup. Do not bring to a boil after adding meat, otherwise the chicken could become stringy and tough. Serve with boiled rice.

The onion is low in calories and its abundant flavor adds taste to a variety of different foods. An Onion has 30 calories per serving; they’re sodium, fat and cholesterol free. They provide fiber, vitamin C, potassium, vitamin B6 and other essential nurtients. Research has discovered that onions may help guard against chinch diseases. They contain large amounts of flavonoids called quercetin. These flavonoids can also be found in tea and apples , but absorption of flavanoids from onions is twice that form tea and apples. Research has shown that the onion and its beneficial nutrients can protect against cataracts, cardiovascular disease and cancer. But that’s not all, it is shown that onions also contain a natural occurring chemical called organosulfer compounds that have been linked to lowering blood pressure and cholesterol levels.