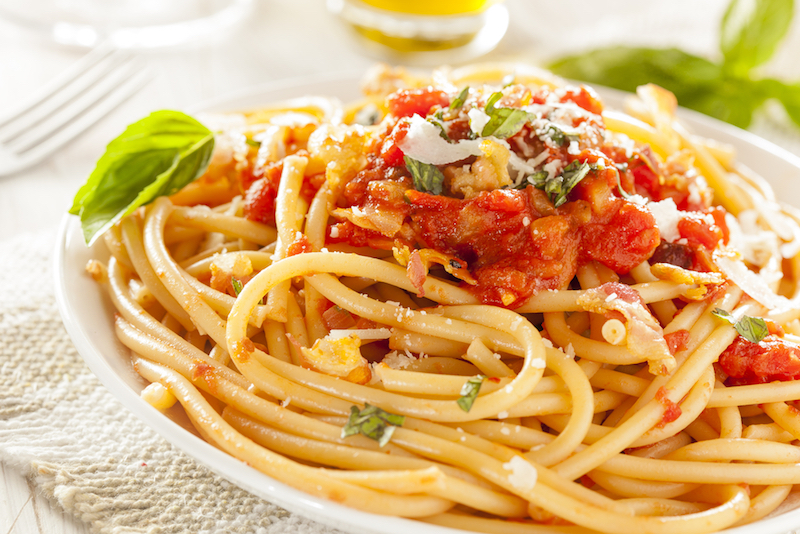 To onion or not to onion?

The food purists of Rome know the answer to this question, however outside of this élite group the rest of the universe seems to be divided on the answer. The recipe that brings this debate to the forefront is one of the most famous dishes to spring from the kitchens of Rome and the surrounding Lazio region, all’amatriciana. The name of this recipe alone engenders debate – is it all’amatriciana or la matriciana? These terms are often used interchangeably, but they are not the same. Today’s recipe is for all’amatriciana, which uses tomato and a cured pork ingredient known as guanciale, while the receipe for la matriciana, also known as la gricia or amatriciana in bianco, does not contain tomato and calls for rigatino, another type of cured pork.

In Italian kitchens guanciale and rigatino are utilized the same way as the better known pancetta is used. Both rigatino and pancetta come from the belly of the pig, while guanciale comes from the more muscular part of the animal. Guanciale comes from the cheek (guancia) of the pig and is triangular in shape like a pillow (guanciale). The consistency of guanciale is harder than regular pancetta and it has a distinctive, unique flavor. The best guanciale is produced in the region of Lazio, in the province of Rieti, particularly from the town of Amatrice. Rigatino is a specialty of Tuscany, while pancetta is produced in several regions of Italy and in different forms.

The recipe for all’amatriciana originates from the town of Amatrice in the Sabine Hills not far from Rome. The traditional type of pasta for this condiment is bucatini (thicker than spaghetti with a hollow center), which are also know as perciatelli and affectionately called sporca camicia (dirty shirt), because bucatini are notoriously hard to eat without making a mess and dirtying your clothing. Other pastas that are often used with this dish are spaghetti and rigatoni. My personal pasta perference for this dish is bucatini – and it’s not because I like to have a dirty shirt!

1. Bring a large pot of water to a boil, add coarse salt and cook the bucatini until very al dente or just about done. The pasta will continue cooking to al dente when it is paired with the sauce in a skillet later on in the recipe.

If using fresh tomatoes remove the skin and seeds and roughly chop them.

4. In a skillet large enough to eventually hold all the ingredients add just a bit of extra virgin olive oil, this is to keep the guanciale from sticking until it renders its fat. Add the guanciale and red pepper and cook over a medium heat until the guanciale is golden. At this point remove ¼ of the guanciale in order to keep it crisp. Raise the heat and add the wine, which will deglaze your pan. Once the alcohol has evaporated remove the red pepper, lower the heat, and add the tomatoes. Cook at a simmer for 10 minutes; taste and correct for seasoning.

5.  Add the very al dente pasta to the skillet and continue cooking with the tomatoes. Add some of the starchy pasta water to the skillet, which will facilitate the cooking and make the sauce creamy. When the pasta is done add the reserved crisp guanciale pieces and freshly grated pecorino to taste.

6. Plate the pasta and add a drizzle of the finest extra virgin olive oil over the pasta. This is optional.

7. Have a piece of pecorino on the table with a grater for those who desire more cheese.

Chef Pace Tip: If you’re using canned tomatoes instead of crushing them with your hands or chopping them with a utensil on a plate or board, cut them up with kitchen scissors while they are still in the can. Hey, clean up just got easier!

Note: I tell my students to use a recipe as a guide, if you like more sauce then add more tomatoes. I like just enough sauce to coat the strands of pasta and prefer not to have a reservoir of sauce left over in my dish to be supped with bread. Can’t use alcohol? Leave out the vino. I use more guanciale then my colleagues, so adjust to your taste, however if you are a vegetarian this dish is not for you. If you don’t like hot pepper, leave it out, and if you want to use parmigiano-reggiano instead of pecorino romano, be my guest. I would insist, however, that you don’t buy pre-grated cheese. Grate it at the last minute for the best taste.

If you’re curious you can read our article on the history of Amatriciana. You’ll notice there are some different ideas about the dish, its history and – alas! – even its name!

Also It is easy to find pancetta but where is the best place to find the guanciale? Online?

This was my very first dish when I went to live in Italy and it continues to be my most favorite dish and I order it any where that it is offered and your right- there are so many versions and tastes of it.