Venetian bar snacks called cicchetti are similar to tapas. Tapas? In Venice? But consider that Spain was a destination of Venice’s far-flung merchants. Furthermore, given the theory that the custom of tapas might have been of Muslim origin and that the Arabs were also trading partners of Venice, it is hardly surprising that such snacks are now commonplace in the city.

These savories might well include the sage potato chips served at Remi, but traditionally they might amount to simpler fare. Fried green olives are among the more intriguing and irresistible examples. It should be noted that in the region around Venice the olives served are invariably green. They come from the Lago di Garda. “Black olives are from the south of Italy,” explains Francesco. In addition to this and the following recipe, some other classic cicchetti include hard-cooked eggs sliced in half and topped with an anchovy, a plate of small grilled sardines, pieces of grilled sausage, and nuggets of cheese. 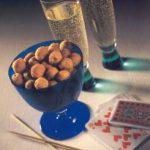