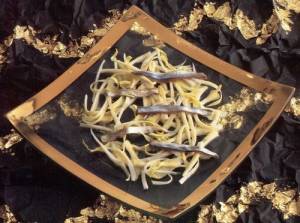 In describing Renaissance dinners in Venice, visitors marveled at the table settings – glassware and forks, items unheard of in other cities – and the luxury of the repasts. Among the dishes preceding the meat were boutarghe (mullet roe), alici (whitebait), capperi (capers), olive (olives), and caviale (caviar), along with salads made with lime juice and preserved flowers. At Remi an appetizer of alici marinated in vinegar is combined with snowy, slightly bitter endive and mellowed with a rich mayonnaise. Francesco advises that if you cannot obtain cured alici, omit them. But if the radicchio of Treviso, with its long leaves is available, it can be used in place of the endives. As for making homemade mayonnaise, it’s a simple task. “And if you do not know how to make it, the mustard will help hold it together,” says Francesco. He adds that the Venetians sometimes used a little mashed potato to stabilize it. Regardless, be sure to use an egg from a reliable source. 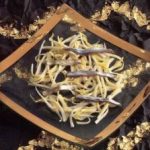