“I think oven-dried tomatoes make the best spaghetti sauce in the world.” Francesco prefers to oven-dry regular round tomatoes, not the oval plum or Roma variety, which he finds can taste too aggressive and overpower the pasta. “I also like the bright flavor of this pasta better without cheese, which adds a pungency it does not need,” he says. “You should not automatically put cheese on every pasta; it depends on the flavors.” This pasta can be served hot or at room temperature. 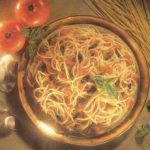