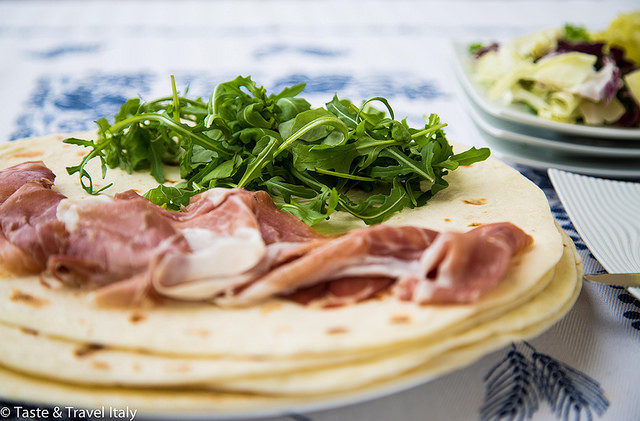 The Piadina Romagnola has a long connection with the history of the people of Romagna. This old traditional “bread” recipe has become, with the passing of time, a traditional dish known among all strata of society: it soon went from being the bread of the poor to a mass produced snackfood loved by many.

Yesterday, it was the food of the poor. Today the most refined palates also appreciate it. The “Piadina Romagnola” has served as poetic inspiration for a series of famous writers, such as Aldo Zama, Aldo Spallicci, Sea Moretti and Giovanni Pascoli who, having been born in Romagna, don’t hesitate to praise the piadina, a dish almost “as old as man.”

In the Middle Ages, the populace only ate what they produced but the gentlemen landlords imposed the use of their mills to make a profit from wheat flour. The piadina – an humble flat unleavened type of bread made of flour, water, and salt in thinly cooked slices – became the daily food staple of the region.

The first traces of piadina take us back to 1371, when in the Descriptio Romandiolae, the Cardinal Anglico speaks of two “piade” that Modigliana had to give as payment. He also describes them with a recipe: “It is made with wheat flour soaked with water and seasoned with salt. It can also be mixed with milk and seasoned with some pork fat.”

Traditionally, piadine are cooked in a specific type of pan, called testo, which is typical of Romagna and has been associated with it for centuries.

The piadina lost popularity in the 1960s, but returned to its notoriety in recent years. It has undergone some changes in characteristics and became a versatile food, popular all over the country.

Today, the piadina (or piada) is known by all. Stuffed full of vegetables, cheeses, meats, it became a quintessential street food of Italy. And it can even become a dessert, or be turned into a vegetarian dish by replacing the traditional lard used in the old fashioned recipe with olive oil or soymilk.

To testify the vitality and the uniqueness of piada, we can also quote the fact that there are numerous recipes and ways of preparing it, which vary from place to place.

Preparation
Mix all the ingredients. Add some water to form a rather hard mix. Or, instead of water, you can add milk or just dry white wine. Stretch the mix with the rolling pin on the board forming a beautiful circle of dough, according to your taste. Sprinkle the rolling pin with flour every now and then, otherwise this dough may stick at the wooden tool and the thin leave may get punctured.

Start cooking the dough on a hot flat skillet or a traditional testo. A piadina must be cooked quickly. As soon as the piadina is cooked on its surface, it forms some light bubbles that must be crushed with the tips of a fork. To turn the piadina, you may like to use a long bladed knife.

I enjoyed this piece. I did not know the history of Piadina Romagnola. Please subscribe me to your blog