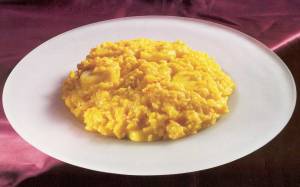 Starting in the 11th century, the spice trade with the East and with Africa enriched the coffers of the Venetian republic and its merchants. At one time there was an official Office of Saffron to control this precious spice, which comes from the stamens of the purple autumn crocus (three filaments per flower). Saffron may be assosciated with Spanish cooking, but it is also essential in the foods of northern Italy, where the saffron tinted risotto alla milanese is a classic example. In discussing the Venetian love of color, Alexandre Dumas pere asked in his Grande Dictionnaire de la Cuisine whether it was “to spices that we owe Titian’s masterpieces” and answered, “I am tempted to believe it.”

Francesco’s saffron risotto is seasoned with ginger and enriched with sea scallops for a voluptuous, golden dish. Despite its taste of the sea and its color, Francesco says it is modern rather than traditionally Venetian. 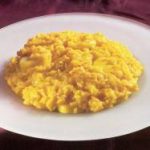 Risotto With Sea Scallops And Saffron