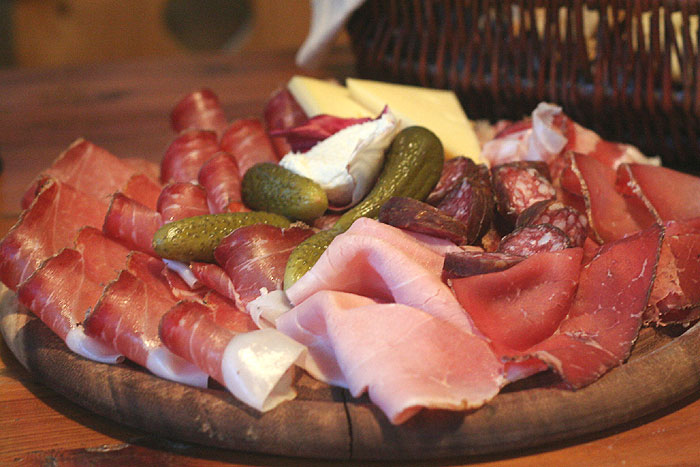 Salumi is not a term often heard outside of Italy, yet many of these products are found in specialty shops or Italian delicatessens and are used by cooks all over the world. Some, like prosciutto, need no introduction while others are not usually seen outside their motherland. Salumi are a large family of high-quality cured meats that go beyond Italy’s famous hams, lending their flavors to terrific appetizers as well as main courses.

Salumi are often confused with another Italian meat product known as salame. Salumi are the product family that includes salame. Salame is a term describing a sausage made from ground pork and spices, which is then encased and often cured. Salumi are also made of pork (usually), but often denote products which have been preserved in salt (and spices) and not encased before aging. There are, so, examples of salumi that do use a natural casing, therefore all salami are salumi, but not all salumi are salame. Salumi tend to be tightly linked to their area of production, to the point of becoming true symbols: think of mortadella and Bologna, or prosciutto and Parma. For this reason, salumi are often protected by a PDO or PGI designation.

Salumi starts with whole cuts of meat from large farm-raised hogs that are cured in salt or brine and then dry-aged. The most famous of these is prosciutto, which stands alone when it comes to quality and flavor. However there are numerous varieties, each different in its own way and many now are available outside of Italy.

No longer a secret outside of Italy, pancetta is a hit among chefs worldwide. Pancetta is often known as “Italian bacon“, however it is not really an accurate description. They look quite similar, both have pink meat with layers of white fat and they both originate from the belly portion of the hog. But that is where the similarities stop since, unlike bacon, pancetta is not smoked, but cured. Using salt, pepper and cloves among other spices (depending upon the region) pancetta is cured just enough to allow for some moisture to remain before resting for up to two weeks in cool, dark rooms. Two specific types of pancetta, the Piacentina and  the Calabrese, are protected by the PDO mark.

Today, you can also find smoked pancetta, flavored using beechwood or oak, both of which are very similar to American bacon. Traditional pancetta is often the base of savory sauces and can be also used to make a delicious stock.

Speck shares its name with a German pork product, but while German speck is basically lard (the equivalent of the Italian lardo), Italian speck has some similar characteristics to smoked bacon. However, unlike American bacon, which comes from the belly of the hog (same as pancetta), speck is made from hog legs. Speck originates from the Alto Adige region where it is made still following traditional procedures protected by a PGI designation.

The meat is seasoned with salt and spices such as pepper, laurel and juniper berries, before being allowed to rest for about a month. Speck is then smoked using flavorful beechwood, ash or juniper for ten days. The meat is then aged for months to produce a smoky and slightly spicy product with a distinct pink/red interior and a small amount of fat. Speck is often served sliced thin or diced, but can also be used to cook with, easily replacing bacon or as a smoky alternative to pancetta.

Guanciale has recently become quite popular and much more available outside of Italy. Guanciale is the cured meat from the jowl of the hog and the name derives from “guancia”, which means cheek. The meat is cured with salt, pepper, chili pepper, and sometimes sugar, for a month. After hanging for another month, guanciale is ready to be consumed. Unlike most varieties this savory salumi is not often eaten by itself. Instead it lends its flavor to the dishes of Lazio, especially its sauces including Amatriciana, Carbonara and Gricia. Guanciale can replace pancetta in any recipe for a bolder flavor.

Culatello is among the most popular Italian salumi, but also one of the most difficult to make. There is more than that, though, because even serving this salume requires special attention. Culatello originates from the Parma region and is yet another masterpiece from the makers of the Prosciutto di Parma. In fact, both products are made from the leg of the hog,  but only a particular portion is made into culatello. The meat is salt cured for three days, massaged and then allowed to rest before being encased. Culatello is technically a salume, as well as a salame. After being allowed to age for up to a year, culatello is finally ready to eat. Sort of.

The outer skin of culatello must first be scraped away and the meat moistened by a wine soaked cloth. After a couple of days the skin and fat are removed and the Culatello is sliced thinly. This is truly a regional delicacy and the care in preparation of this salume is unequalled in Italy. The painstaking process to produce the prestigious culatello di Zibello is now protected by a PDO designation.

These three regional products are other examples of encased salumi, similar to salame. However, the process in making these differs from salame in that the meat is not ground and mixed with fat. Instead coppa, capocollo and soppressa are made in a manner closer to prosciutto. They share a common production method and use the same part of the hog, the neck, which is then flavored using wine, salt and spices. The blend is allowed to rest for a ten-day period, before being encased and aged.

Coppa hails from Piacenza, while capocollo originates from Calabria and both are protected by PDO. Soppressa is the variety made in Veneto and uses shoulder and leg portions as well as red wine. It is also aged for longer, up to a year. All varieties have a texture that is reminiscent of prosciutto, with a red color contrasted by white veins of fat. Flavors can range from delicate and mellow to the more robust and spicy flavor of capocollo.

Bresaola is the one major exception to the all-pork world of salumi. It is made from beef in the Valtellina area, but shares a similar production method to pork salumi. Beef fillets are mixed with salt, pepper, laurel and cloves before being allowed to age. The meat is then encased and allowed to mature for about three months. Bresaola is dark red and should have almost no fat at all, it is sliced very thin and served as an antipasto with olive oil and lemon.

Most of these salumi last a long time, provided they remain unsliced. However, all of them must be consumed quickly after being sliced to prevent flavor and moisture loss. That is why it is best to only purchase what you can eat in a short time. In the case of bresaola, it must be eaten immediately upon being sliced. The same is true of culatello and speck, which will dry out quickly.

Most of these salumi are served as antipasti and should be sliced very thin to get the most flavor and aroma. However, pancetta, guanciale and speck can be sliced thin, chopped or diced since they are often used in cooking. All varieties of salumi go well with red wines; beer is good for smoked salumi like speck or certain versions of pancetta.