We’re all more than familiar with Sicily’s own sugary and creamy incarnations, cannoli and cassata, yet not many, I think, are aware of the amazing history behind their creation, a history that mirrors closely that of the land where they both were conceived. And what about the other symbols of Sicily’s sweetest side? What about the fresh, zesty granita and its faithful companion, the brioche con il tuppo? Or biancomagiare di mandorle, delightful child of one of Sicily’s many agricultural excellences, almonds.

Sicily is a land of idiosyncrasies. Rich and opulent when it comes to nature, art and food, it’s one of Italy’s poorest regions. Unwilling cradle to the Mafia, the mother of all criminal organizations, but also birthplace of some of Italy’s very own anti criminality heroes: Falcone, Padre Puglisi, Borsellino, Impastato. Profoundly independent when it comes to its identity, yet more Italian than Italy itself. However you look at this beautiful land, it’s bound to surprise you each time, even when you think to know it relatively well. This is true also for food and for its desserts in particular.

Follow us in this short trip through the history, flavors and, of course, beauty of marvalleous Sicily and the sweetest of its culinary creations.

The saucy origin of a classic: cannoli siciliani

Cannoli need no introduction: they’re known and beloved in the US as much as they’re back here, in their old country. Their crunchy, fragrant shell (we call it “scorza,” just as the skin of citrus fruits) is a heavenly match to the rich explosion of textures and defined flavors of their filling. Cannoli are definitely not a dessert for the faint hearted, they are sweet, creamy and decadent to the maximum extent and they fill your mouth the way the voice of a Verdian soprano fills the air: with voluptuousness.

Something not everyone may know is the not-so-hidden sensuality of cannoli’s flavor is well supported by the legends surrounding their origins. Close your eyes and think about how Sicily may have looked like more than 1000 years ago; we’re in Caltanissetta, stronghold of the Moors on the island. Even its name comes from those long gone times of cultural mingling and growth, as “Caltanisetta” derives from the arabic locution “kalt el nissa,” the women’s castle.

And it is, indeed, in a castle we must enter to learn about the first time cannoli were made. Apparently, the many concubines of an arab prince living in Caltanissetta, bored with the tedious life of the harem, took a liking for cooking and baking: one of their main creations was, alas, an elongated pastry case with a ricotta, honey and almond filling inspired by … the emir’s own manhood. True or not, it’s interesting to note that also the other legend tied to cannoli’s creation talks about harems and concubines, although in a slightly less rowdy fashion. In it, the emir’s women, free after the end of Arab domination in Sicily, sought protection in convents, where some of them eventually became nuns. Here, they made popular some of the harem’s culinary delicacies, including the original version of modern cannoli.

To some, howewer, cannoli existed long before the arrival of the Moors in Sicily.  In the 1st century BC, a dessert looking just like them is mentioned by Cicero himself : a “tubus farinarius, dulcissimo, edulio ex lacte facto,” that is, a pastry made of flour and milk, shaped like a cylindre, that makes the sweetest of foods. Now you tell me if that doesn’t sound like a cannolo to you. 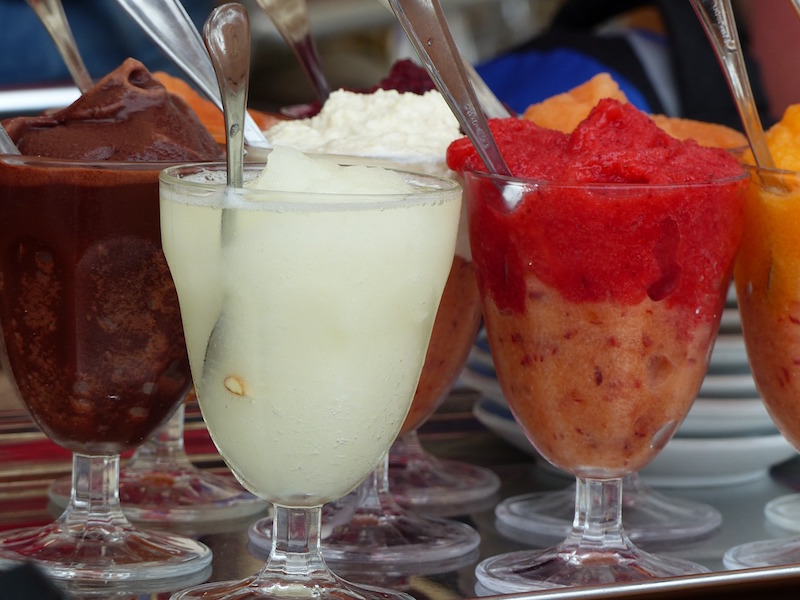 If you’d like to know more about the delicious brioche con il tuppo, I suggest you take a look at our very own recipe, which also include some interesting information about the origins of this mellow, softer-than-a-cloud sweet bread. Let’s talk here about its more faithful companion, the heavenly granita Siciliana. Just as in the case of cannoli, it seems the origins of granita have to be sought in Arab Sicily: the habit of mixing snow with honey and fruit came, it seems, from the Moors.

By the Middle Ages, eating this snow-based sweet concoction was common, as it’s attested by the presence of a profession, that of the nivaroli, who had the duty to collect clean snow from the slopes of Mount Etna, as well as the Paloritani and Nebrodi Mountains, and to preserve it in stone and brick constructions called neviere. When the heat came, nivaroli would take the snow out of their neviere, cover it in straw and bring it to the coast, where it was flavored and served to the wealthy and aristocratic of the area.

The snow was shaved and topped with a variety of fruit juices and flower essences, and sweetened with honey. Favored flavors (alliteration and subsequent pun not intended)? Lemon, of course, but also coffee, almonds and mulberry. This old fashioned way of making granita survived with the name of “rattata” until the early 20th century, and it’s still popular in Rome where it’s known as grattachecca.

In the 16th century, nivaroli created the “pozzetto”, a container made by an external wooden shell and an hollow zinc core: the space between the core and the shell would be filled with a mix of snow and sea salt, which contributed to refrigeration. The ingredients for the granita would go into the zinc container. Thanks to an external handle, the ingredients could be continuously stirred, without having to open up the pozzetto: it was the first embodiment of an ice cream machine, if you will. This new granita was softer than the rattata and it is, we can say, the true ancestor of our beloved granita Siciliana.

Today, lemon and coffee granite are probably the most popular: the coffee one is heavenly, especially when served with lashings of whipped cream. And, of course, a brioche con il tuppo! 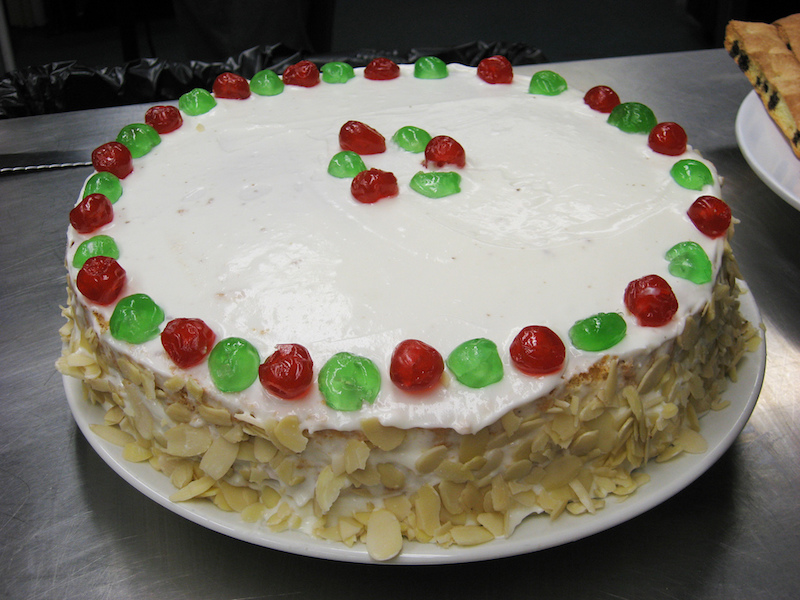 Angel food, made in Sicily: biancomangiare

Delicate, light and sweet, biancomangiare (literally, “white eating” or “white food”) is not only typical of Sicily, but also of Valle d’Aosta and Sardinia. However, recipes differ slightly in each region. In Sicily, biancomangiare is a creamy and delicate dessert, made with ground almonds, sugar, cornstarch, lemon rinds and cinnamon. It has the consistency of a crème caramel, with a more exotic, spicy taste.

Biancomangiare has a long story to tell: it was already famous in the Middle Ages, as its presence on Italian tables was already attested in the 12th century. Interestingly, it wasn’t only a dessert: savory variations of it, made with chicken, broth and lard also existed. Its sweet version, however, is the one we still love and enjoy. As it often happens, each part of the region has its own version of the basic recipe: in the Modica area, almond milk is used instead of cow milk; in Ragusa, people add honey. As for cannoli and granita, biancomangiare may have Arab origins, too, even though some believe it was invented by the French.

Today, biancomangiare is part of the Lista dei Prodotti Agroalimentari Italiani (PAT, the list of Italy agro-culinary products), endorsed by our Ministry for Agriculture.

And so it ends our short trip through the history and flavors of Sicily’s desserts: luscious cannoli, refreshing granita and delicate biancomangiare. Where else in the world, let’s face it, would we find such a perfect mingling of history, legend and flavors?