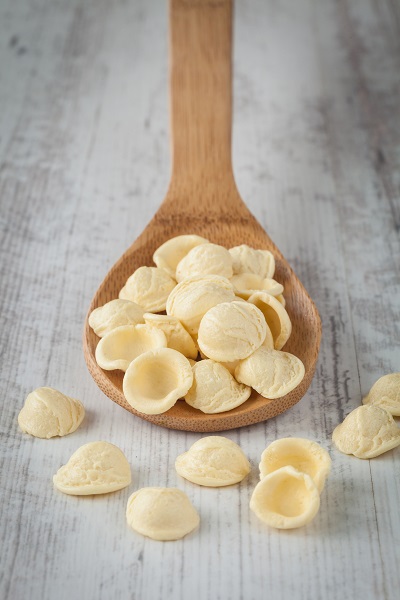 When you think of pasta, do you see the market aisle filled with boxes of dried spaghetti and linguine? Or how about tender, delicate pillows of fresh pasta dough beautifully crafted into countless shapes and sizes? For years, fresh pasta has been significantly more superior in taste and texture than dried and processed boxed pasta. It’s easy to make and even more delicious to enjoy alongside a traditional red sauce and bottle of your favorite Chianti. Before dumping the next box of pasta into a pot of boiling water, why not try making a bowl of fresh pasta taking inspiration from a variety of Italian pasta shapes.

A cousin to spaghetti, angel hair pasta is thinner and finer, with a limited ability in holding up to thick, heavy sauces. Due to its reduced size, this delicate pasta is typically served with no more than olive oil and fresh herbs, but can be served alongside a variety of sauces and toppings.

In a shape of small bells.

Ditalini is similarly shaped to macaroni. It is slender and hollow, often used in Italian soups and stews.

Available in a variety of colors as a result of added essences such as spinach or beets, Farfalle is a bow tie shaped pasta. The outer edges of this pasta are smooth and straight, or crinkled with a scallop-type edge, and the center is pinched or crimped together in order to form the bow-tie shape. Farfalle is a favorite among children and a creative choice for refreshing summer pasta salads.

Similar to spaghetti pasta, fettuccine is wider and slender like a ribbon. Fettuccine holds its shape beautifully under heavy meat or cream-based sauces. Alfredo sauce, a luxurious blend of cream and Parmesan cheese (which is not very common in Italy, btw), is the most famous sauce to adorn fettuccine pasta.

This long cylindrical, corkscrew shaped pasta is used in a variety of Italian cuisine. As the hollow fusilli cooks, the shape of the pasta expands to larger than when dry and uncooked.

Used almost exclusively in the Italian classic pasta, meat and cheese dish, lasagna is thin, flat pasta. Lasagna edges may be straight and flat or rippled.

Macaroni is also commonly referred to as “elbow” shaped pasta. It is a hollow tube made in a variety of sizes.

In the shape of a tube or cylinder, manicotti is most often prepared stuffed with ricotta cheese, then topped with red sauce before being baked to a cheesy, golden brown.

In a shape of a small ear. The most famous are from Bari, it is a coarse surface pasta that absorbs better the sauce.

Orzo is very similar in size and texture to rice. This grain-shaped pasta is traditionally used in soups and stews but is delicious in summer salads with vegetables and a light pesto sauce.

Penne or Mostaccioli pasta is long and tube-shaped, traditionally paired with meaty, thick sauces. Most penne pasta is cut on the bias and contains ridges believed by many to aid in the adherence of sauces to the pasta.

This small square-shaped pasta dough can be stuffed with an endless array of fillings. Ravioli is one of the few types of pasta that must be prepared using fresh pasta dough because of the need to adhere two pieces of ravioli together during assembly and cooking.

Rigatoni is simply a larger version of the tubular-shaped penne, but wider and with straight ends.

Likely the most popular shape, spaghetti is long, thin and slender pasta classically used in what most people call spaghetti. Dried and fresh spaghetti is traditionally made from Durham wheat flour.

This pasta is similar to ravioli in that it is stuffed pasta. Tortellini is stuffed with a variety of ingredients such as cheese, meat or cooked vegetables, then folded and rolled into a doughnut shape.

Shaped very similar to penne, ziti is long and tube-shaped, but slightly curved with a smooth surface.