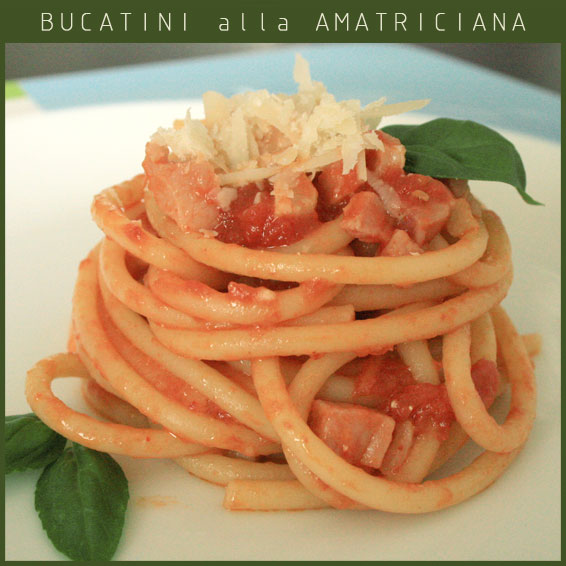 The tragedy of central Italy’s earthquake brought attention to the small town of Amatrice: once one of the “Borghi più Belli d’Italia“, very little of it remains today. Before, Amatrice was mostly known for another reason: being the hometown of one of the country’s most famous dishes, pasta all’Amatriciana. So much is it associated to the town, it has been widely used all over the world as a means to gather funds for victims, with several restaurants introducing it to their menu to donate the profits derived from its sales to the areas striken by the earthquake.

Surely, the name itself of the dish, “amatriciana,” should leave little or no doubt about its origins. However, things are more complex and less straightforward than it may seem, not only in relation to how pasta all’Amatriciana came to be, but also about the actual ingredients that go in it, as well as the type of noodles better mirroring the original recipe.

Does Amatriciana come from gricia? Which type of pecorino should you use on it? Is it spaghetti or bucatini? And is it “amatriciana” or “matriciana”?

Below, we will try to solve some of these mysteries for you!

The real story of pasta all’Amatriciana

At the very beginning was an ancient, traditional recipe for pasta sauce called “gricia” or “griscia.” Still popular today in central Italy, la gricia is made with olive oil, guanciale, black pepper and pecorino cheese. Apparently, it was commonly cooked by shepherds of the area around Grisciano, a small hamlet near Accumoli, another village sadly hit by the recent earthquake.

According to some, the people of Amatrice added tomatoes to gricia, creating thus our Amatriciana. The magic addition took place, it seems, sometimes between the end of the 17th and the beginning of the 18th century and became popular around the peninsula in the years of the Napoleonic Wars (1798-1814), when the recipe travelled along with the large amount of soldiers displaced from one corner of Italy to the other. Others think tomatoes were added to gricia in Rome, hence giving some more credit to the capital in the elaboration of this famous dish: this latter hypothesis, however, seems largely discredited today.

The first written mention of Amatriciana sauce, with tomatoes and all, comes from the cooking manuals – seven intriguing volumes, going under the name of The Modern Apicius – of famous roman chef Francesco Leonardi, who served it to a lavish banquet organized by pope Pius VII at the Quirinale, in honor of Francis I, emperor of Austria. Leonardi was well known internationally and worked in several European courts, including that of Russian Catherine II.

Even the French knew about Amatriciana: in 1807 culinary expert Grymond de la Reynière mentioned it in his Almanach des Gourmandes.

To sum it all up, we can say the origin of Amatriciana as an earthy dish from the hills of the Rieti area is pretty very certain. Specifically, Amatriciana appears to have evolved from another traditional dish, pasta alla gricia, to which the people of Amatrice added tomato, making it the iconic sauce we all know today.

There are more mysteries to discuss, though. For instance, why is Amatriciana so strongly associated with Rome and how did the dish enter the capital to begin with? And what are the true ingredients that go into a good, old-fashioned pasta all’Amatriciana? Read on to find out.

Amatriciana: between Amatrice and Rome

Pasta all’Amatriciana – or, indeed, “matriciana” as they say in Rome because of apheresis, a phonetic phenomenon that takes place when a vowel or a syllable at the beginning of a word falls – is strongly associated with the Italian capital even if, we saw, it does not originate from its streets. Quite simply the dish, just like people, migrated from the Appennines of Amatrice, to the hustle and bustle of Tiber’s banks.

Very likely, it was brought into the city by the many Amatriciani who, during the 17th and 18th centuries, would travel to Rome from the hills to sell their produce, cheeses and cold cuts. In the 19th century, then, Amatriciani migrated in large numbers to the capital because of the decline of sheep farming and found employment especially in restaurants, where they helped cementing the popularity of the dish. They were so many at some stage that full areas of Rome were named after Amatrice: modern Piazza Lancellotti was, for instance, once known as Piazza de’ Matriciani. The first historical amatriciano restaurant in the city opened near Piazza Navona in 1860 and was called Il Passetto.

The real ingredients of pasta all’Amatriciana

Amatriciana is a simple, earthy dish, mirror to the pastoral tradition it was born off. This does not mean, however, that each area tied to the dish does not have a specific way to make it.

Some ingredients are the same for all: tomato sauce, guanciale and pecorino, all present in the Amatrice’s Amatriciana, which is considered the most classical. In it, “pomodori pelati” (those you buy in the tin) or pomodori San Marzano (a delicious variety of plum tomatoes) are used for the sauce. Pecorino is always that of Amatrice, not as salty as pecorino Romano, and guanciale is always local. A dash of dry white wine is used to sauté the guanciale and a spoon of extra virgin olive oil is added to the sauce while it is cooking. Chilli pepper is sometimes used, too.

The recipe proposed in the decades of yore by Francesco Leonardi – the one he probably served to the Pope and to the Emperor of Austria – included some onions for the sauce, while other variations prefer pepper to chilli or pecorino Romano to that of Amatrice. When it comes to tomatoes, the rules of Amatrice are very much followed everywhere else, but some cook like to use concentrate instead of fresh or canned.

More than one type of pasta can be used for Amatriciana: in Amatrice, the dish is always and exclusively made with spaghetti, while Rome prefers bucatini. Vermicelli and rigatoni are also common choices. Leonardi, his cooking manuals remind us, had opted for “maccaroni,” a fresh, slightly thicker variety of bucatini.

Fancy making a good plate of Amatriciana? Check out our Amatriciana article and recipe. Some different views on Amatriciana, its origins and its name are given in the piece, an interesting sign of how complex and rich the inception and life of this amazing dish.