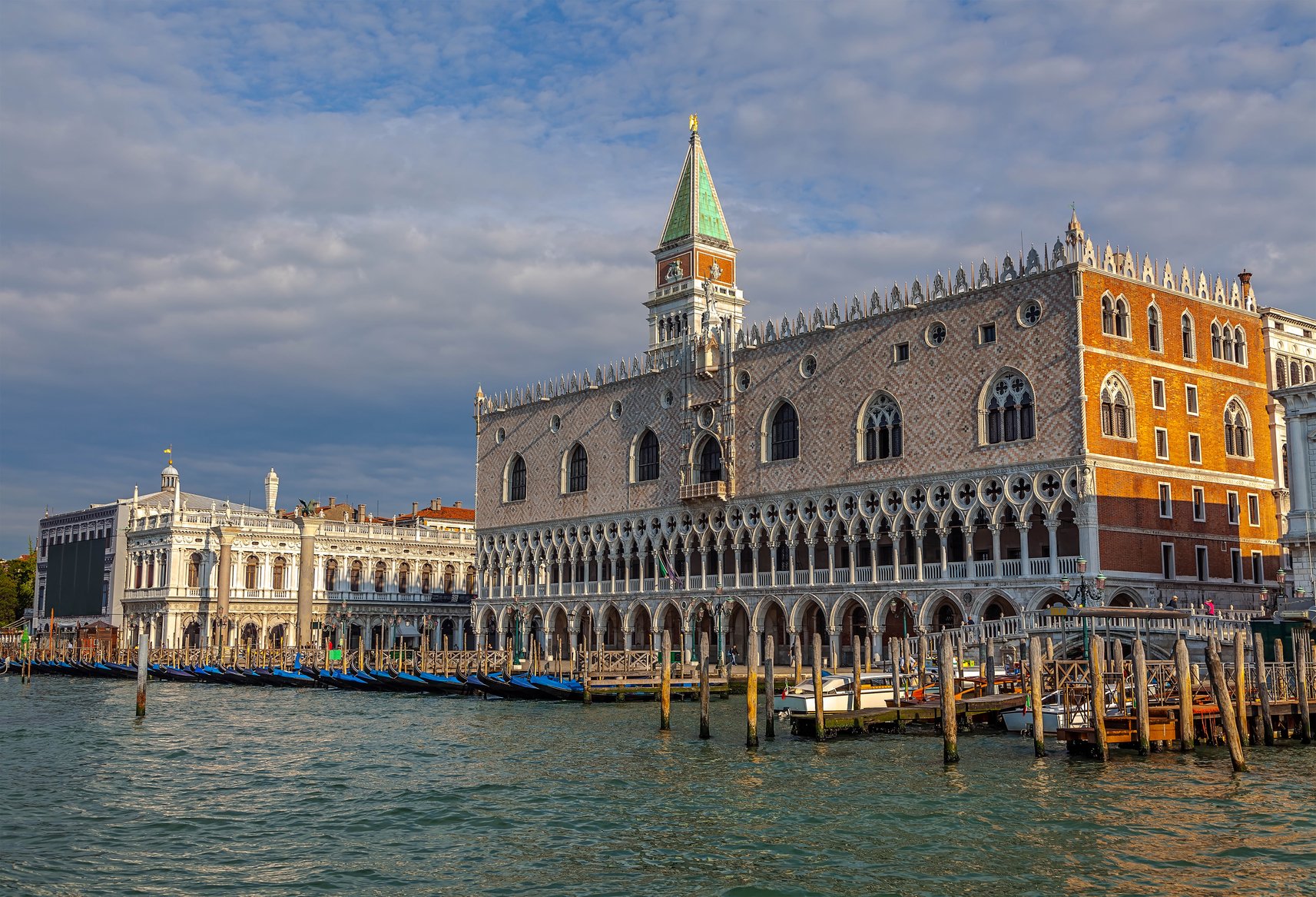 Venice, La Serenissima, once supreme in its world, is ever sublime. This floating tapestry of 117 islands, a fantasy of lacy bridges and shrouded alleyways, of gilded palaces and dark canals, of romance and mystery, of fleeting images and lingering reflection, is a city of mists and sunshine that exists at the mercy of the moon-driven tides.

At one time the most important place on the planet, a crossroads for traders and travelers between east and west, north and south, it remains the most magical. In Lord Byron’s words, “as from the stroke of an enchanter’s wand: The revel of the earth, the masque of Italy!”

This fabulous realm that used sequins for currency, as if at a party, was governed by aristocrats of a mercantile disposition, whose turn of mind was so pragmatic that they also invented the stock exchange. In addition they controlled the quality of the rest of Europe’s food. The Allure of the East appealed to the Venetian taste for the extravagant and irresistible to Marco Polo, who embodied the essence of the adventurous, inquisitive Venetian Spirit.

Venice became a place of mystically glittering Byzantine mosaics, serpentine arabesques, fantastic color, and above all, a panoply of rich and exotic flavors.

In this vibrant kingdom that enjoyed independence for one thousand years, a cuisine of similar distinction evolved and today, in a world of disappearing cultural borders, the delicately forthright cooking of Venice and style of presentation retain their uncommon character.

Venice is above all, a proud city of the sea. In that shadowy time between ancient Rome and medieval Europe, the city’s first settlements were on the beach at what is now the Lido. The early Venetians lived in a fragile water-bound fortress to protect themselves from predatory hordes on land. As the populace grew, so did the settlement and its power.

The Venetians began trading in salt and fish, built their boats, and from the 10th century on, under the leadership of successive doges (dialect for “Leader,” dux in Latin, duce in Italian), expanded their sphere of influence first toward Byzantium to the east then to the Levant to the south, and eventually overland in Italy and in the rest of Europe. The Adriatic became Venice’s second Lagoon.

To their commerce in salt and fish, the intrepid Venetians added a priceless catalogue of spices, pepper, ginger, saffron, cloves, and nutmeg. Then sugar brought from India and refined in Venice enriched the city’s coffers as it sweetened the food of all Europe.

A fleet with ships built in the dockyards of the Arsenal made war to advance mercantile ambitions. Venetians joined the Crusades from the 12th to the 14th centuries, primarily because they understood that commerce could develop along the route rather than because of religious fervor. In fact, Venice was the only city-state in Italy never to submit to the control of the pope. “Venetians first, then Christians” (veneziani, poi cristiani) was the saying.  Venice’s independent spirit, supported by its power gave it the determination to resist the advances of the Turks, the Milanese, the Vatican, and the French and also made it a haven for political exiles from the internecine feuds in Florence and other provinces. Visitors like Jacopo d’Albizzotto Guidi, who came from Florence 1427, described the fruiterers, poultry merchants, butchers, and wine sellers along streets also filled with goldsmiths, embroiderers, and vendors of tapestry.

The city was at the pinnacle of wealth influence in the 15th century. Though it had lost some of its possessions in the Aegean Sea to the marauding Turks, Venice was still flourishing by the dawn of the 17th century, when John Evelyn, an English visitor described it as “one of the most miraculously placed of any in the whole world, built on so many hundreds of Islands in the very sea, and at a good distance from the continent.”

Within one hundred years, having been embroiled in costly wars with the French, Spanish, and resurgent Turks, the republic had relinquished much of its empire. “The great days of Venice are over,” said the French ambassador in 1718, after a peace treaty ending the War of the Spanish Succession was signed. “The city, however, remains a perpetual delight.”

Throughout the 19th century, a time of occupation first by Napoleon then by Austria, Venice continued to fascinate artists, writers, and musicians, who by 1846 could travel by train across the new bridge from Mestre on the mainland. Just as the complex harmonies of Vivaldi, the glowing artistry of Bellini and Titian, the theatricity of Goldoni and the Carnevale, the imagination of such writers as Casanova were nurtured in Venice, the pens of others like Russkin, Browning, Sand, Mann, Proust, and Hemingway, and the brushes of Turner and Sargent would similarly be inspired. Its artistic wealth was eventually enriched by the long-term residence and legacy of Peggy Guggenheim in the 20th century.

Although Venice no longer boasted a huge merchant fleet, it turned to the wealth of its glass and gold, to tourism and fishing, activities it maintains with renewed vigor today.

Even without the might of a far-flung empire, Venice still depends on the bounty of the sea. Its cuisine not only is based on seafood but also celebrates the abundance of market gardens on outlying islands, farms of the hinterlands, and curiosities from around and expanded world that are constantly brought to its kitchens. And only as the Venetians can, they flavor all this with millennia of dramatic, luminescent history, with spices and herbs, from afar, and with the shimmering inspiration of its water and light.

Here polenta is the color of saffron and rice is tinted with the ink of cuttlefish. Flower blossoms are friend or candied and eaten for their color as much as for their elusive, faintly aromatic flavor. Scents of ginger, nutmeg, mace, licorice, tarragon, and even curry tease in the countless dishes. Ethereal dessert is fancifully dubbed “pick-me-up.” The haunting dark fragrance of coffee perfumes the air.

Fish is central to the table. Little birds are preferred to larger game. Meat comes in translucent, saline slices of prosciutto, the rosy transparencies of carpaccio, or stir-fried slivers of fegato alla veneziana, a classic of Venetian cuisine that says it all: Asian stir-fry sweetly flavored with caramelized onion and edged with a touch of acid.

The bitterness of radicchio, the sweet and sour of many marinades, the pungency of olives and anchovies, are all part of the Venetian table. But there is always a lightness, a refusal to mask with heavy sauces, an insistence on freshness and balance, that dignifies the cuisine.

Venice was an early laboratory (and warehouse) important in the development of fine European cooking. Venetian merchants introduced such now-basic ingredients as sugar, rice, and coffee to the continent and long held a monopoly on the distribution of salt and pepper. If the morsels of food in a dish like fegato alla veneziana were bite-size, they were not cut small just to enhance the cooking, but to allow the fastidious Venetians to pick them up with their forks at a time when the rest of Europe was still licking its fingers. Forks and glassware were first used on the Venetian table. By the 16th century the cuisine was renowned throughout Europe for its delicacy. The artistry of thousands of unnamed craftsmen working in silk, lace, and lustrous glass has shaped the Venetian table.

The first Venetian cookbook, a six-volume work by Bartolomeo Scappi, was published in 1610. A Venetian of the period, Gerolamo Zanetti, compared the cooking of France unfavorably with that of his own city, writing that “French cooks have ruined Venetian stomachs with sauces, broths, extracts, meat and fish transformed to such  point that they are scarcely recognizable.”

Tourists today are often surprised at the simplicity of the food and at the similarity of the menus from restaurant to restaurant. While revelers at Carnevale go about disguised as birds and mountebanks, the cuisine does not stoop to artifice for flavor. Ultimately the food of Venice comes to the table embellished and distinguished, ever so subtly, by Byzantine, Turkish, Dalmatian, Persian, Spanish, Jewish, Austrian, Indian, African, and even Chinese notions.

Venetian food is not the cooking of Venice alone. There are three “Venices” that look to the city. Venezia Euganea, the area more often known as the Veneto, with Venice as its capital, extends from the gulf of Venice westward to the Lake of Garda and includes the cities of Padua, Verona, Vicenza, and Belluno. Treviso, a beautiful city of villas north of Venice, is also in the Veneto and shares the cuisine of seafood, grains and vegetables.

In Cortina d’Ampezzo the ski resort in the dolomites where the Veneto stretches to the Austrian border, the food is rustic and more Germanic than Italian, as it is in the neighboring province of the Alto Adige, also known as the Venezia Tridentina, situated between the Veneto and the borders of Austria and Switzerland. Here Dumplings replace gnocchi, slabs of pork sausage fortify the polenta, and bollito misto anchors the main course. If there is fish, it is likely to be mountain trout. Strudel graces the dessert table.

To the east of Venice lies Friuli, or Venezia Giuliana where the sea marries hearty mountain cooking. Potato soup, roast pork, and cabbage dominate the table in the northern part of the region, while at lower elevations and nearer the sea, artichokes, asparagus and seafood reappear. Like the Veneto, Friuli is known for its wines.

In the world of contemporary cuisines, regional cooking everywhere is being eroded by the tides of trendy notions. The delight and surprise of seasonality have fallen victim to technology and global marketing. But the food of the Venice region continues to celebrate market freshness. While maintaining its tradition of fusing and interpreting many influences, it has also managed to sustain a unique, intriguing and often seductive simplicity.

The Venetian table is essentially a frugal one, and its cooks, like those in other parts of Italy, depend on the quality of the ingredients rather than elaborate techniques. Then, once the dish is done, it may be worthy of presentation in a great and frivolous display of Venetian glass, lace, silver, and linen.

The vision of Remi, an expanding, and almost doge-like culinary empire based in New York, with outposts in Santa Monica, Mexico City, Tel Aviv, and eventually elsewhere, is to understand the past, reflect the present, and without compromising the integrity of what Venice and its food represent, evolve into the future.

The restaurant, a realization of the combined efforts of Adam D. Tihany, the brilliant designer whose Venetian sensibility led to its conception, and Francesco Antonucci, its chef, co-owner, and one of Venice’s most outspoken culinary ambassadors, is named for the gondolier’s oar. Like the oar it is sleek, stylish, and traditional yet finely crafted to cut the water and stay ahead of the next wave.

“I think it’s very important to keep the typical symbolic dishes of Venice alive, and to make sure they do not become phony or watered down,” says Antonucci. “But at the same time, I think we can use these dishes as the basis for a contemporary cooking that draws on ideas from all over the Mediterranean and that responds to the new more sophisticated American and international taste.”

Venice, described by the foods writer Waverly Root as “a stage setting for an extravaganza,” is on Antonucci’s mind as he cooks and thinks about food. He brings his heritage to the market and the kitchen.

As for Tihany, he dreams of Venice, the city he has evoked in Remi-New York, a narrow curving canal of a space fitted with bridging arches, a colorful face-like mural, glittering Murano chandeliers, and snappy maritime stripes. He would take to heart the words of Henry III of France upon his first visit to Venice. “If I were not the king of France, I would choose to be a citizen of Venice.”