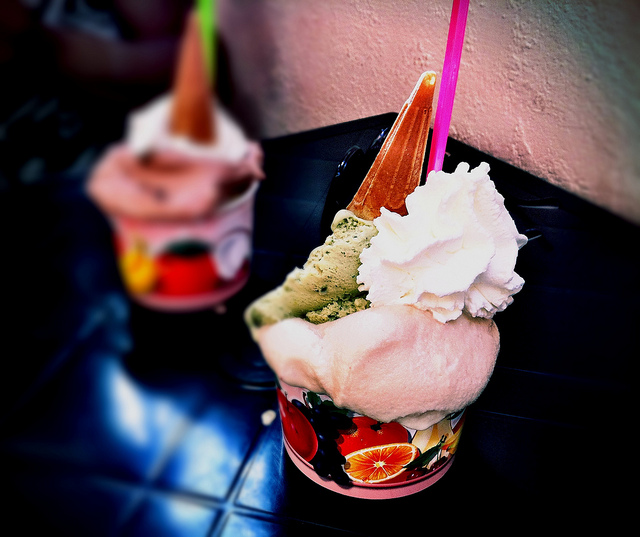 I had this idea about writing an article on the best gelaterie in Italy. Of course, I’ve plenty of favorite locations myself, but I would have certainly – and rightly – angered someone by including only places in Piemonte and Liguria (not because I think the only good gelato comes from there, but because that is where I live), so I sought for wisdom online.

And oh boy! what a venomous snake pit have I unearthed: basically, every single list, nevermind if published on a small blog or on La Cucina Italiana, came with a corollary of virulent, war-like comments, where insults about geographical origin, knowledge of food and questions about partners’ fidelity mingled with one another to create, I admit it, some of the most entertaining reads of my week.

Beside keeping me amused for a while, the whole diatribe aroused my curiosity about one specific matter: what makes gelato really good gelato? Now, we’ve already dedicated an article about the difference between gelato, ice cream and granita, so I remand you to it if you are interested in the knitty-gritty of icy desserts’ origins and peculiarities. The question at stake here is relative to gelato only (the Italian variety of ice creams) and is not as simply answered as it seems.

You see, in Italy, really good gelato is synomym with 100% gelato artigianale, that is, made only with natural ingredients. The problem is, it is easier said than done, apparently, as many establishements declare to use only natural stuff when they, sometimes, cut corners with concetrates and flavored pastes (or so many gelato lovers in the comment sections of those best-of articles maintained).

Determined to understand more about it, I took to the internet once more and discovered a couple of interesting facts I am happy to share with you…

Is there a statutory definition of gelato artigianale?

In fact, yes there is, and it does not appear as strict as you may expect. According to Il Gelato Artigianale, the first dedicated portal to artisanally prodused gelato, supported by a series of official gelato-related institutions, such as the AIIPA (the Italian Association for Food Industry Products) and CRIGA (the Centre for Artisanal Gelato Research and Innovation), gelato artigianale is “a food preparation obtained by mixing ingredients, bringing them to a creamy-soft texture and serving them to a determined temperature through a quick freezing procedure. The cooling takes place while the mixture is stirred to allow a moderate incorporation of air.”

So far, so good, you may think, and I agree with you.

Things get interesting when it comes to primary and secondary ingredients: along with wholesome stuff such as milk, yogurt, cream, eggs, sugar, water, there are also “fats,” “egg-derived products” and “emulsifiers and thickeners.” These are all primary ingredients, that is, essential to the prepare a basic gelato. Secondary ingredients can be, really, anything, from fruit to nuts, from chocolate to candies, but also include “food creams” and “semilavorati” (only partly prepared ingredients).

Words as general as “fats”, “egg-derived products,” “emulsifiers,” “food creams” and “semilavorati” may seem odd in the ingredient list of something defined “artisanal,” but is it really so?

Names can be deceiving

The confusing nature of a part of the allowed ingredients in the Gelato Artigianale list must have left some with the same doubts, because the Gelatieri per il Gelato, an established Italian association of professional gelatieri (gelato makers), has been fighting to create more clarity about what should and should not go into gelato artigianale.

Gelatieri per il Gelato was originally created, in 2011, as a simple gelato makers’ group, but soon developed into something more serious: the founders noted how Italy, in spite of being the birthplace of artisanal gelato, lacks any sort of legal regulation defending its quality and defining properly what can and cannot be considered as such.

Their list sheds light on what those “fats,” “emulsifiers” and “semilavorati” may be. To begin with, all milk and milk derivatives (such as condensed milk and powedered milk, for instance) can be used, provided their origin is clear. As today the array of gelato flavors is larger than ever, the list includes also dairy such as cream cheese, yogurt and cheeses in general.

Egg products include both fresh and pasturized eggs, provided they come from either organic or free range farms. Cocoa and chocolate are prefered of high quality and fruit, both fresh and dry, can be used freely. The same can be said for spices. Yes, I know it: there is nothing today Italians have not turned into a gelato flavor. Fructose, honey, glucose sirup and sugar are all accepted, too, as are some more finnicky sounding sweeteners such maltodestrines and inverted sugar. A curiosity: chemical sweeteners and stevia are not accepted. Thickening agents must all be of natural origin and are as varied as pectin or guar flour.

Accepted, some may say necessary, are dried fruit pastes, preferibly of IGP or DOP origin.

Of course, nothing that gets into a gelato artigianale can be genetically modified.

Reading around about gelato making help understand a couple of things. The first is, of course, that gelato artigianale must be produced with high quality, wholesome ingredients. The other is that there is nevertheless the necessity to use specific substances to make gelato as good as it is and also to better preserve it. Thickeners and stabilisers are needed to make gelato not only nicer, but also safer to eat and certain pastes are used to produce flavors also when their main ingredient is out of season: now I understand why my mom always told me to eat fruity gelato during the Summer. It is, simply put, just nicer.

In the end, it is good to know gelato artigianale is controlled by authenticity and freshness-preserving regulations, even though they are not dictated by the state, but rather implemented by gelato makers themselves.

All in all, yes: if you want gelato, choose it handmade: you will know what you eat, and will be made with love.