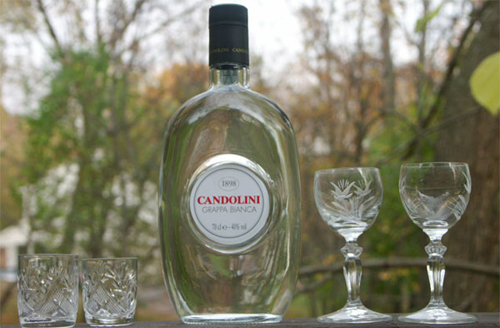 Grappa is a uniquely Italian drink. Traditionally made from pomace, that is, discarded grape seeds, stalks and stems that are a by-product of the winemaking process, grappa has been around since the Middle Ages, but its history has even deeper roots.

From the ancient Egyptians to Mediterranean alchemists, all the way to our tables, grappa is not only the perfect, elegant conclusion to a good Italian meal, but also a symbol of the magic and mystery that, for centuries, has been  associated with the making of spirits in Europe.

Let’s learn some more  about  it!

History of Grappa: the Origins

The history of acquavite and of all distilled drinks goes way back and leads us to the times of Mesopotamia, some 800 years before Christ. However, the first written mention of distillation dates from the 4th century AD, and is found in a treaty  about alchemy by no other than Synesius of Cyrene, an African bishop of the early Catholic church: Synesius tells us the Egyptians knew already how to distill spirits some 40 years before Christ was born.

A couple of centuries after Synesius, Arab alchemist Abu Beckr Mohamed Ibn-Zakariaya el-Rhazi wrote about distilling “the water of life” and the right methods to do it.

History of Grappa: the Middle Ages and the Renaissance

In the Middle Ages, the process of  distillation in Italy  became common. However, it would take a few centuries for wine distillates to leave the chemist’s cabinet and enter people’s pantries. Yes, because spirits were initially considered a medicament, rather than a pleasurable drink to aid digestion or stimulate conviviality, and  it was only in the 16th century that Italians began enjoying it as a tipple.

In fact, the first to write about the distillation of grappa, at the time known with its Latin-inspired name of acquavite, was a doctor, Michele Savonarola from Padua, uncle of Girolamo Savonarola, infamous friar to be burnt at stake in 1498. His text, De Arte Confectionis Aquae Vitae (On the art of making acquavite), tells  us  there are three types of acquavite consumed in Italy in the 15th century: acquavite semplice (simple acquavite), acquavite comune (common acquavite) and quintessenza (quintessence).

For a couple of hundreds years, acquavite kept its ambiguous status of medicament and drink, with a variety of types produced.

A pivotal moment in the history of our beloved grappa comes in the 17th century, when the first Corporazione degli Acquavitieri is created in Venice. This shows production had  become consistent enough to call for an association regulating it, especially in the North East of the country, the area where, still today, grappa is most largely produced.

History of Grappa: a bit of Semantics

But is it grappa or acquavite?

Let’s get things in order. Acquavite, as we said, comes from the Latin aqua vitae, that is, water of life. Or this is the most widely recognized etymology of it. However, on the basis of some medieval documents, it may in fact come from the words aqua vitis, with vitis indicating the shape of the alembic used to distill it.

So, whichever way you look at it, acquavite is the most ancient term used for our grappa.

The word grappa began being used in the late 19th century and  derives from Northern Italian dialectal words such as grapa, which means grappolo, “bunch of grapes.” Other dialectal terms used for our grappa – all from the North and  all  tied semantically to the term grappolo – are graspa and trape (Friuli), both of  which mean pomace. Which is, indeed, the basic ingredient of grappa.

So, both terms are actually right, although grappa refers specifically to the acquavite obtained by distilling pomace. But be aware that, legally, only pomace acquavite produced in Italy can be called grappa! Everything else is known as acquavite di vinaccia, or distillato di vinaccia.

Similar to France’s brandies and cognac, or Portugal’s sherry, grappa is a distilled beverage. That means the mixture of grape pieces and alcohol is heated gently, allowing much of the mixture to evaporate, and leaving a potent concentration. Today’s grappa is about 40 to 45 percent alcohol. That’s 80 to 90 proof. After distillation, Grappa is usually stored in glass bottles for about six months before it is distributed. The flavor profile of grappa depends on the grape varietal used, but generally, grappa is potent and dry. Occasionally, a producer will add a little syrup or herbs to sweeten the lot. This sweeter grappa is particularly popular on the American market.

The character of grappa changed in the 1960s largely thanks to the efforts of one woman – Giannola Nonino. Her Nonino distillery, in Percoto Italy, has been producing grappa since 1897. In the early 1970s, she began making grappa from a single grape, as opposed to the customary mélange of grape leftovers. She sought to make a quality drink, one to rival the great eaux-de-vie of France: it was an uphill battle.

She sold very little of her first, 1973, production. Undaunted, she offered her grappa free to journalists, restaurateurs, and asked that it be served at important commercial and government dinners. She poured the drink herself and told her story as she filled the glasses. Slowly, in this way, the charismatic Ms. Nonino created a following.

The Nonino Distillery’s first single grape Grappa was crafted from the Picolit grape. Today, over a dozen different grapes are used for single grape grappas, called “monovitigno” grappas, a term Ms. Nonino coined herself. In 1984, the same Nonino distillery gained government approval and began producing a higher quality Grappa made from whole fruit. They began with grapes and in the following years, produced products using cherries, pears, apricots, peaches, and raspberries, among other fruits. Seeking a way to show off their new products, Nonino is also responsible for the stylish glass bottles in which grappa today is sold, a dramatic change from the old medicinal-style bottles.

Grappa’s popularity has spread all around the globe. Once unknown outside of Italy, today grappa is being produced all over the world, from Oregon to South Africa. These outposts use the indigenous grapes of their regions, such as Oregon’s Pinot Noir, creating unique and tasty variations on the Italian theme.

Every year there’s a competition to find the best grappe in Italy, the Alambicco d’Oro.

In 2018 the Distilleria Bottega won the Special Prize for the highest number of medals won with its grapes (seven, including one gold for the Grappa di Moscato Alexander).

Like wine, grappa comes in all varieties and qualities, with the flavor based on the grape or fruit used. Grappa is available in wine stores and premium liqueur retailers throughout the United States. Expect to pay from $10 for a simple bottle to over $100 per bottle for a single fruit variety. Although you will often see the decorative grappa bottles lined up behind bars and at restaurants, grappas are actually best stored in a cool, dark place. Out of light and heat, they can last several years, though they will lose some of their fragrance as they age.

You can try to make grappa by yourself at home, or you can buy it. The most expensive grappe are those produced from particular grapes (like the Suprema Grappa Refosco, at 65 USD), by famous distilleries (Bocchino Cantina Privata costs around 80 USD), or have been aged for 10 years or longer (Grappa Stravecchia Le Diciotto Lune, around 100 USD).

Traditionally, grappa is served (either at room temperature or chilled) in small glasses and served after the meal, as Italians believe that it aids digestion. Correctly, grappa should be swirled gently in the glass and then brought to your nose, before tasting. It is then tasted in small sips. In Italy, grappa is also added to espresso to make a “Caffè Corretto,” a popular after-dinner concoction. In the United States, you’ll find grappa at higher-end Italian restaurants and retailers. If you’ve never tried Grappa, you’re in for a treat. It’s a fiery, but tasty beverage, just the thing for a cold winter’s night.

See Also Grappa and other Liquors and Liqueurs in Italy