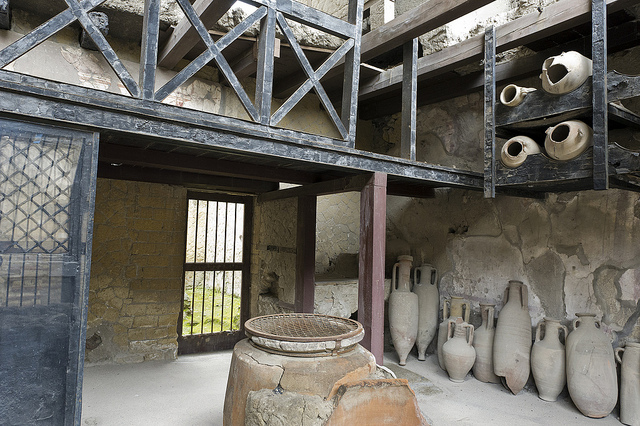 “No poem was ever written by a drinker of water,” the great Roman poet, Horace wrote.

People have enjoyed drinking wine for thousands of years ever since its ancient origins in Mesopotamia, near present-day Iran. Italian and French wines are amongst the best and Italy is the largest producer of wine in the world. This makes sense because the Romans made the most contributions to the ancient art of viniculture.

The Greeks, who settled in southern Italy and Sicily, exported the art of vine-growing to Italy. They were so impressed with the mild Italian climate, which was perfect for producing wines, that they called Italy, Oenotria, or the land of trained vines. The Etruscans, who settled in central Italy, also produced wines. The Romans improved the techniques that the Greeks and Etruscans used.

Demand for wine increased greatly with the population explosion in Rome from 300B.C. to the beginning of the Christian era. It increased to over one million people and, as even the slaves drank wine, much more wine had to be produced.

The Romans loved their wine, drinking it with every meal. However, as the alcohol content was stronger than ours, they mixed it with large quantities of water. They preferred sweet wine and strangely enough their most prized wine was white. This came from what they thought was the best wine-growing area in their lands, the Falernian region near Naples.

Unusual flavors were often added to the wine. The Romans liked to mix it with honey to make an aperitif called mulsum. They often added herbs and spices, but were known to mix wine with salt water, too, which must have given it an extremely bitter taste. Even chalk was sometimes mixed with wine to reduce acidity!

The many contributions the Romans made to the art of wine-growing included using props and trellises, improving the Greek presses used for extracting juice, classifying which grapes grew best in which climate, and increasing the yields.

The Romans exhibited good taste by deciding that aged wines tasted better and preferred wines that were ten to twenty-five years old. They discovered that wines which were kept in tightly closed containers improved with age, and became the first to store it in wooden barrels. They may also have been the first to use glass jars and they also used corks.

They exported their excellent wine-growing techniques to other areas of Europe and these were not changed for centuries.

But demand for wine decreased with the fall of the Roman Empire. Roman Catholic monks continued to produce wine during the Dark Ages, but it only became popular again during the Renaissance.

During the nineteenth and twentieth centuries, Italian wine was often criticized for its poor quality and the government decided that steps had to be taken. DOCG or new wine regulations were introduced to improved the quality of the wine.

Today Italian wines are considered by critics to be amongst the best in the world. As there are twenty different regions to choose from, each with different varieties, it is never difficult to find a fine Italian wine!

(see also History of Wine I)

Should have been a big red flag knowing how its roots began in the Church… Hello!?!

Hello Colette! Today, we produce more reds, but the production of white wines is growing because of the sparkling wines. During Roman times, it was more white wine.

That’s so interesting. We owe the Romans so much and more… But which wine is produced more, red or white?