Italy is not only and simply known for her fine wines, but also for a plethora of liqueurs and spirits we enjoy at times as an aperitivo, at times as an after-dinner digestive. Often, they become also important ingredients for some of our favorite desserts. Do you really know, though, the most famous Italian liquors? 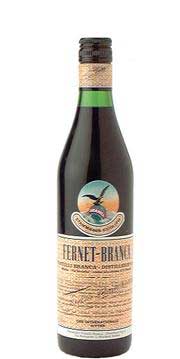 Certainly on of the most famous Italian liquors — and the most loved — this bitter and fragrant delicacy is made from the infusion of numerous ingredients, obtained from 4 continents. After the infusion takes place, Fernet rests in wood barrels for at least a year. The name of this liqueur, according to many, originated from the Milanese dialect “fer net”, literarily, a clean iron, from the hot metal rod once used to mix the ingredients together. And it is, in fact,  in Milan that Fernet acquired its fame, thanks to producer Bernardino Branca who, more than 150 years ago, started up producing the famous amaro.

Fernet is best consumed after a meal, to help digestion, but can also be used as an addition, or “correction” to espresso coffee. An interesting, and true, anecdote about the first imports of Fernet into the USA tells how, when BAFT inspectors first tested Fernet they classified it under “medicinal beverages,” for which import duties were much lower than alcoholic drinks.  Only several years later was it determined that Fernet was an after-dinner liqueur, hence commanding a higher import duty.

Amaretto  is a sweet liqueur made of almonds (Amaretto di Saronno is one of the most famous ). Nowadays, it is prepared using an almond essence, although it was originally produced by macerating apricots kernels. Amber-colored and almond-scented, amaretto can be enjoyed after a meal, as a digestive, or as an ingredient in cakes and cocktails.

Aperitivo: made with some of the most famous Italian liquors

Aperitivo  has become a bit of an international phenomenon in recent years, but it is still quintessentially associated with living life Italian Style. Among the drinks used to make aperitivo figure some of the most famous Italian liquors around:  Aperol, Biancosarti, Martini Bianco or Rosso, just to name a few.

These are all aperitif wines and liqueurs consumed prior to the meal, along with various snacks. In Italy the aperitivo is viewed as a moment of cordial companionship prior to a meal with family or friends.

Campari  is a red, bitter cordial that can be served in many ways, including with grapefruit juice, vodka or Tonic Water and ice. Campari fans drink it undiluted, on the rocks or mixed either with mineral water or, for a more aggressive taste, with white sparkling wine.

Centerba is a very strong amaro, with a bitter taste that somewhat masks its high alcoholic content. It is based on an infusion of many herbs (centerba means 100 herbs), and the bottle is presented in an attractive straw basket.

Two of the  most famous Italian liquors: Cynar and Frangelico

Cynar – This liqueur is made from artichokes – It is bitter-sweet, and mixes well with Tonic water and Ice.

Frangelico – Hazelnut liqueu/cordial, a nice after-dinner choice if you have a sweet tooth and is particularly nice with coffee.

Grappa – Fermented from the peels, seeds and stems of grapes. Grappa is usually clear in color and of high alcoholic gradation.Grappa can be purchased plain or flavored in a variety of ways: with pears, apples, prunes, and can be produced with various types of grapes, berries or herbs. Grappa is very popular in northern Italy, and has gradually gained recognition in many other countries, particularly in the US. It is normally consumed as an after dinner digestive drink or with coffee.

Limoncello – Limoncello is obtained by macerating lemon rinds in alcohol. The best known limoncello-producing area in Italy is probably the Sorrento Coast, in Campania, where lemons are almost as big as grapefruits and their scent mixes with that of the sea and deliciously fill the air. Interestingly, limoncello at its best offers mixtures of lemon, lime and marine scents. Nowadays, limoncello is made in most parts of Italy, but the Sorrento version remains the most exquisite.

The Magic M’s of Italy’s most famous liquors

Maraschino is produced with cherries and mostly used as an ingredient for desserts and cocktails. Martini – Italian brand of both sweet and dry vermouth, from which the ever popular Martini Cocktail has derived.

Marsala : Italy has many types of “Port-like” wines or “vino liquoroso”, including Marsala. Marsala is a deliciously sweet wine, produced in different varieties and quality levels. Its cheaper versions, usually defined “marsala imitations” may be ok to bake with, but if you’re a wine lover, opt for the better quality marsala and enjoy a wine which can easily compete with the best ports. Marsala wine is divided in dry, semi-dry and sweet categories, and can be aged from 1 to more than 10 years.

Last but not least, mirto. Mirto is a typical product of the island of Sardinia, where myrtle thrives along with other plants like juniper and arbutus (strawberry-tree), typical shrubs of the Macchia Mediterranea. Myrtle berries, dark in colour, are left to macerate in alcohol and produce this dense, aromatic liqueur, with hints of sage and cocoa and a deep, garnet color.

Nocino is imilar to Amaretto and  is made with green walnuts (traditionally gathered on the night of the 21st of June, midsummer’s night and Saint John’s) and their husks, which are placed to macerate in alcohol along with other spices, such as cinnamon and cloves, and sugar for a period in between 40 and 60 days. Originally produced in  Emilia,  nocino was said to be used as a medicine. Nowadays, it is commonly agreed that, in small quantities, it helps digestion.

The most popular brand of Sambuca, the one that almost stands as a synonym for the product itself, is certainly sambuca Molinari. Sambuca Romana, however, is another popular choice in Italy. This strong, syrupy and aromatic liqueur is made with star anise and white elderflowers. It is served as a digestive or, with the addition of water, as a long (and refreshing) drink. If you order this in a restaurant, you will typically see 3 coffee beans floating in it, (called Sambuca con la mosca – Sambuca with the fly) signifying health, happiness and prosperity. The number three is often considered lucky in Italy, so don’t be surprised if you notice it popping out here and there while on holiday in the country!

Liquore Strega — literally the witch liquor–  this amaro is a yellow, bitter-sweet liqueur cordial with a unique taste.

Vin Santo, on the other hand,  is a sweet Port-like wine from Tuscany, typically consumed as an after dinner sweet drink, which goes particularly well with cantucci, crisps, aromatic almond biscuits, usually dunked into it.

I am looking for Sambuca Original Liquore produced by Tuoni & Canera, Livorno, Italy. I want to know who distributes it.

I was wondering if Mille Fiori is still available. I had some at a friends house. Great flavor!

Was there ever a Sicilian liqueur called Solado.
I’m sure I used to drink that when I used to go to Sicily almost 40 years ago. I adored it but I’ve never seen it since

I have an old bottle of PONTI ASTI LIQUER
ORIGINALE OF ITALY
produced & bottled by
I.R.V.A.S.-S.p.A.CANELLI-ITALY

Are you familiar with this liqueur? Can’t find it anywhere.
Do you know it’s worth?

Dolores,
Maybe you are thinking of Ratafia? It is a sweet drink with a taste of black cherry, sometimes fortified with red wine, depending on where it is made. My Nonno would offer some after dinner on Christmas Eve. His was from Santo Spirito Aroma d’Abruzzo.

The red sweet liquore may be the strawberry liqueur Fraggiolino. Very sweet and somewhat syrupy.

@Dolores, could you be thinking of Alchermes? It’s a liqueur that I often use for baking.

Grenadine is my other guess ????

I am looking for a sweet very red liqueur my father let me try every Christmas as a little girl. I am now 70 and cannot figure out what drink it was. It was in the 50’s that I drank it.

I have never heard of it, it is probably a liqueur typical of Piedmont. I am not sure you can add a picture, try!

I found a bottle of “Originale Asti Liqueur” unopened in a box. I can send a picture and I’m curious as to what type of spirit it is?

2
in Italy > Food and Wine > Wines > Most Famous Italian Liquors: