The happy, almost human-like presence of the glorious sunflower is finally dwindling in the fields and gardens of Italy now that we’re approaching late summer. However, its happiness and sunshine can often remain in our minds for long into the winter months…

A native of the Americas, the sunflower symbolized the image of the Sun God to the Incas and its sunny presence and edible seeds have linked the plant to humans for 4,000 years or more. In fact, the first known signs of the sunflower’s domestication by humans was in around 2,300 B.C in Tennessee at the famous Hayes site.

The sunflower’s seeds have been long prized for their oil content and are sold from China and the U.S to Russia as a snack food; it has also been cultivated across Italy for centuries because of these qualities. Research is currently being carried out to refine the oil for use as a bio-diesel.

The composition of the sunflower’s florets itself is also rather fascinating and has been studied by mathematicians like Leonardo Fibonacci (a 13th Century Italian mathematician from Pisa, Tuscany*) and Greek mathematicians alike.

The sunflower’s complex mathematical structure is based upon the famous “Golden ratio” (again, discovered by Fibonacci) where the growth rate of successive numbers gives a ratio which converges on1/2x (1+/5) = 1.618, known as the “Divine proportion” or “Golden section” of geometry and aesthetics in nature.

In simple terms this means that there can be 34 spirals in one direction and 55 in the other direction, or on some larger flowers can range from 89 to 144. The symmetry and logic of a sunflower’s flower structure has astounded and fascinated artists and mathematicians alike and manages to cross many fields of science in one simple… flower.

There are even curiosities concerning the sunflower’s cultivation, as the young seedling of the sunflower soon sets about establishing the position of the rising sun in the east, on its emergence from the soil and faces in that direction throughout its life. This ability to grow in the direction of the sun is known as Heliotropism and has earned the flower the name of “Girasole” (Sunturner) in Italy.

Leaving science aside, the sunflower’s cultivation needs are really quite simple; full sun, fertile soil and good watering after planting. By addressing these simple requirements the sunflower will happily provide us with a flower spectacle that is rivaled by few others and its presence will bring sunshine to any vegetable garden or funky flower border. 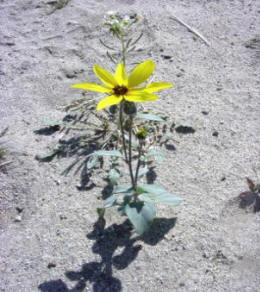 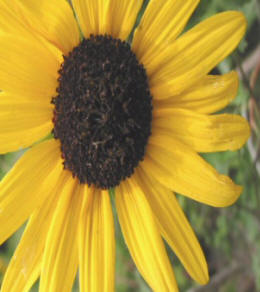 Sunflower seeds can be toasted whole to enhance their nutty flavor and then sprinkled into salads, added to bread or eaten as a snack food on their own. The oil of the crushed seed is widely used as a cooking oil. 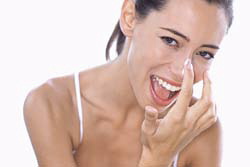 Sunflower oil is rich in both vitamin A and vitamin E and being a semi-drying oil it can even be applied to oily skins as a moisturizer. The plant also has diuretic and expectorant properties which have been used successfully in the treatment of pulmonary and laryngeal afflictions such as whooping cough.

Contact Jonathan at info@web-ecologica.com for more garden trivia or advice on Italian gardening.