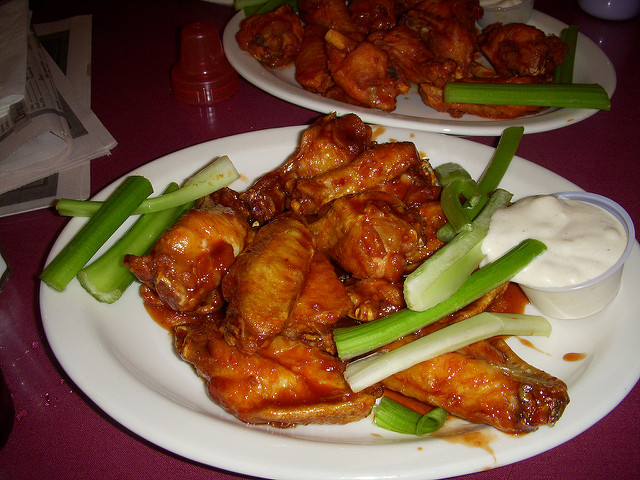 You learn something new everyday…like, for instance when you find out about the  Italian origins  of Buffalo wings and pretzels. I honestly didn’t expect it.

One of my best friends is a proud Buffalonian: she loves her city, is a faithful Bills’ supporter and there’s nothing about Buffalo she doesn’t miss dearly now that she lives in Europe. She was, of course, the first to introduce me to Buffalo wings: disappointed by those on offer in the Irish city where we went to college together she, one evening, decided to make them for me from scratch. I still remember our desperate search for Frank’s in each and every supermarket of the area, and her stern, almost offended look when I suggested to “pick another hot sauce.”

Oh, I knew so little about Buffalo wings then…

Today, they’re one of my go-to starters when I have guests and I consider them one of my favorite dishes.

Let’s go back to New York State, just a bit south of Buffalo, actually, in the Syracuse area, where another dear friend lives and where I have some of my fondest American memories: we used to do a lot of sightseeing and most of our lunches and snacks were a quick affair in some little café or strip mall on the way to wherever we were headed. Never mind the place, it’s during one of those trips I got to eat my first American pretzel, warm and flavorsome, with a side of honey mustard dip.

I’m not writing about Buffalo wings and pretzels because I want to make you hungry at all costs -although I’m aware it may well be a consequence of reading this article on an empty stomach – but because this two all-American culinary icons have something interesting in common: Italy.

How, you ask? Read on and you’ll know all about it.

The Anchor Bar, in downtown Buffalo, it’s were our trip to discover the Italian origins of Buffalo wings  and pretzels leads us first.

It was established in 1935 and bought by the Bellissimos, Frank and his wife Teressa, in 1939. The couple, as their surname betrays, were members of Buffalo’s large Italian American community: no wonder they loved food.

Fast forward to 1964, the year when Buffalo wings were created. This date is one of the few, undebated things related to their origin: this, and the fact the skillful hand behind it was that of Teressa. The actual story of how they came to be has been passed on in various versions.

Frank Bellissimo, Teressa’s husband, would mention an unwanted delivery of chicken wings sent to the bar instead of chicken necks and backs, used to make broth and sauces. As all good Italian mamme, Teressa was not one to let food go wasted: she fried them and concocted an original sauce with Frank’s red hot sauce and butter to coat the wings with. Spicy as they were, she knew people’d need something to cool down their mouth, so she decided to serve them with blue cheese dressing, the Anchor’s house dressing, and celery sticks. Voilà, Buffalo wings were served.

Or maybe not, because there’s a different version of the story: Teressa and Frank’s son, Dominic, who ran the restaurant after his parents, says Buffalo wings were born just a handful of minutes before midnight, one Friday night of 1964. According to his recollections, he was tending the bar, while some of his friends were drinking and had the idea of offering them some snacks to go with the beers. His father Frank pointed out all of his mates were Catholics and didn’t eat meat on fridays, but it was almost midnight, in the end, so they asked to Teressa to make something up with what was left in the kitchen and, lo and behold: Mrs Bellissimo came out with the Buffalo wing. This version of the story is the on the Anchor Bar’s website, so we’ll take it as the closer to the truth.

Certainly, we know the wings became a hit among Buffalonians, who are seriously proud of their wings, as I’ve learnt by being friend with a Buffalo’s born and bred.

Teressa, who passed away aged 84, in 1985, was truly an Italian mamma: apparently she could make a fantastic meal out of anything and she was known in particular for her squid marinara, scaloppine and meatballs.

Pretzels: made popular by Germany, but born in Italy

I know, pretzel are very much associated to the German world, and rightly so: Germany was the country where pretzels became most popular in Europe at the time of their largest diffusion in the Middle Ages and, very likely, it was German immigrants who brought them to American shores for the first time, even though some maintain they arrived to the New World along with the very first pilgrims of the Mayflower. So, yeah… we won’t take the pretzel away from Germany, but it’s interesting to know that the very first one may have been baked in Italy, within the majestic and blessed walls of a monastery. It was 610 AD when, the legend says, monks started making pretzels as treats for their young students. Pretzels took their shape from that of crossed arms, at the time typical posture for prayer. The three holes in them came to symbolize the Holy Trinity and soon, also thanks to their association with spirituality, they became popular in über Christian Medieval Europe.

A curiosity: in the Middle Ages, they were considered a perfect food for Lent thanks to the simplicity of their ingredients, water, salt and flour, which didn’t go against the strict nutritional rule dictated in those times by the Church.

A culinary line leaving Italy in the 7th century, reaching America via Germany in the early years of the colonization and landing in Buffalo, in the kitchen of a popular restaurant owned by a couple of Italian immigrants: here’s how Buffalo chicken wings and pretzels came to be. Ah! The beauties of history and the beauties of the table!

Now, if you’ll excuse me… I think I have some chicken wings and some Frank’s in the kitchen…