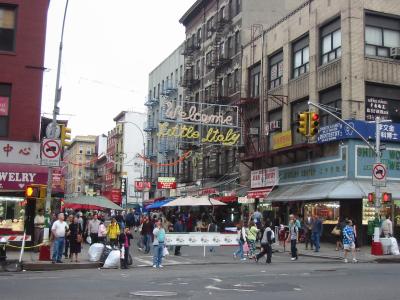 The first generation of brave individuals and families who left the Italian homeland faced many hardships towards their goal of a better life. Often the men of the family would arrive first at one of the major ports and have to find food, shelter and a job in a strange new land before the whole family would arrive. As waves of immigrants flooded the waterfronts of cities such as New York, Boston, Philadelphia and New Orleans, they often pushed the earlier arrivals of Irish, German, Jewish and Portuguese immigrants out of their ethnic enclaves or took over the old neighborhoods as the previous occupants moved out.

Once establishing a foothold in these neighborhoods and sending enough money back home, the rest of the family would arrive to find a mix of both new and familiar. These neighborhoods, especially the original in New York became known as “Little Italy” since it seemed the Italian immigrants brought every aspect of Italy with them. From their regional dialects and religious festivals to traditional occupations and of course their excellent food, the first generations of immigrants tried to recreate their homeland within the confines of these crowded and often dirty warrens of streets and alleys. Later arrivals would find that many cities across the United States and Canada had their own Little Italy as the Italian immigrants outgrew the original neighborhoods and moved to form new ones.

Today the Italian American population, even the one in old neighborhoods is fully assimilated into the larger culture. However, it is evident by visiting any Little Italy that Italian Americans have not lost their cultural identity. Many of the original Italian neighborhoods that still survive are vibrant, holding onto their traditions and are often popular tourist attractions in America’s greatest cities. Below is a listing of the largest and most famous Italian neighborhoods in North America, affectionately known to all as Little Italy.

Little Italy in the USA

The most famous and perhaps original Little Italy in America is a shadow of its former self. Occupying little more than a few blocks of Mulberry Street in lower Manhattan, New York’s Little Italy has been nearly absorbed by Chinatown, continuing the tradition of successive waves of immigrants. However reduced, the neighborhood is still what most people think of as “Little Italy” and is often used as the backdrop in movies and television. New York’s Little Italy is home to the famous San Gennaro Festival every September and extends the neighborhood (temporarily) several blocks all the way to Houston Street. New York’s other Little Italy is in the Bronx along Arthur Avenue and is home to a still active Italian community. Little Italy in the Bronx is home to several festivals in the summer including the Feast of Saint Anthony in June and the Feast of Mt. Carmel in July.

Boston’s Italian neighborhood is known as the North End and has a very old and rich history that predates the arrival of the Italians. This was Boston’s first neighborhood and housed some of the city’s most famous personalities, including Paul Revere (his house is still there) before being the refuge of Irish, Jewish and finally Italian immigrants. By the time most of the Italians arrived around 1900 the North End was a squalor of old tenements, with the new arrivals packed like sardines into a square mile of land. Over decades conditions improved for Italian immigrants and many families decided to leave the crowded North End, but those who stayed kept the neighborhood alive. Today the North End is one of the most popular tourist locations in Boston and is home to several Italian Festivals during the summer months including the Fisherman’s Feast in August.

The Little Italy of Baltimore is located close to the Inner Harbor area and Fells Point, newly renovated and very popular for its great restaurants. This neighborhood has been occupied by Italians since the 1890’s and still retains a large Italian community. During the warm months, the neighborhood is home to Bocce games and open-air film festivals. Little Italy is the end point for the nation’s oldest Columbus Day parade, celebrated since 1890 and hosted by the Italian American community. In June Baltimore’s Little Italy celebrates the Feast of Saint Anthony and the Feast of Saint Gabriel in August.

The Little Italy neighborhood of Philadelphia was made famous from the Rocky movies and occupies a working class, waterfront neighborhood in the South Philly section. The heart of the neighborhood is the Italian Market on 9th street that evokes images of the great outdoor markets in Italy. The neighborhood is home to some of the best food in the city and home to both century-old Italian eateries and a wave of newer restaurants serving more upscale Italian cuisine. However when most people think of this neighborhood they think of the famous Philly Cheese steak, not necessarily Italian but delicious and alone worth the visit.

The Hill section of St. Louis is one of the most popular Little Italy neighborhoods in the country. The community dates to around 1900 and is amazing how many Italian immigrant families made their way through here to work in the factories and the railroad before settling elsewhere. The Hill was home to some illustrious Italian Americans including baseball personalities Yogi Berra, Jack Buck and Joe Garagiola, who all grew up on Elizabeth Avenue. Today the neighborhood is still predominantly Italian American and is home to numerous excellent restaurants specializing in Northern Italian cuisine. The most famous contribution to Italian American cooking coming from The Hill is the Toasted Ravioli – a deep fried ravioli served with marinara sauce that is very popular in the American Midwest.

At the base of Murray Hill along Mayfield Road lies Cleveland’s Little Italy. This tight-knit and virtually intact community dates from the 1920’s and is thriving with numerous art galleries and of course, excellent restaurants. From this neighborhood emerged the first pasta machine as well as a restaurant run by a certain chef named Boiardi. The place became so popular that he changed the spelling of his name to Boyardee and spread Italian food to the masses via aluminum cans. Every August Cleveland’s Little Italy celebrates the Feast of the Assumption with a four-day party.

Chicago’s Little Italy occupies several blocks of Taylor Street on the West Side, but is much smaller than it once was. Little Italy was once much larger and mainly home to Southern Italians while the other (and much smaller) Italian enclave known as the Heart of Italy located on the Lower West Side was made up of immigrants from the North. Both of these locations are known for their regional Italian specialties and standout restaurants in a city known for excellent food on every corner. Every June the Heart of Italy neighborhood celebrates this fact with its two-day Festa Pasta Vino celebration.

The North Beach section of San Francisco has been home to some famous Italian Americans such as baseball legend Joe DiMaggio and Amadeo Peter Giannini, founder of the Bank of Italy- later to become the giant Bank of America. This once very concentrated enclave of Italian immigrants, many of them continuing their fishing traditions from back home reached its peak population around 1915. Slowly, as Italians starting moving out, the neighborhood began to see an influx of other groups and ethnicities, such as the City’s ever growing Chinatown and the arrival of artists and writers starting with the Beat generation. North Beach has become very multicultural over the decades, as several other ethnicities have moved in to this highly desirable neighborhood. However many Italians still live in North Beach and the neighborhood is home to everything you would expect in a Little Italy including great restaurants, specialty shops, and Italian American social clubs.

Little Italy of San Diego dates back to the 1920’s and the city’s booming tuna industry when thousands of Italian immigrants flocked to the waterfront for work. The community occupies several blocks between the harbor and Interstate 5 and is San Diego’s oldest continuously running business district. The neighborhood suffered after the decline of the tuna industry but within the last decade there has been a plan to refurbish Little Italy into an even more desirable business district, which has thus far been very successful. Besides improving the neighborhood commercially, the Italian American community has made cultural improvements as well including public murals and banners celebrating famous Italian Americans. Starting in 1994 Little Italy has been home to the Little Italy Precious Festa every October and the local Little Italy Association has recently started hosting a Venetian style Carnivale in February among a whole calendar full of sponsored events.

Along St. Lawrence Boulevard, a short drive north of downtown is Petite Italie, the Italian Canadian neighborhood of Montreal. Petite Italie dates to the late 19th century with another large influx of Italian immigrants arriving after World War II and is still home to the largest ethnic group in predominantly French speaking Montreal. One of the main attractions of the neighborhood is the La Difesa church with its beautiful frescoes and brick facade. Other highlights include the numerous Italian shops and restaurants along St. Lawrence Boulevard and the best coffee in the city. The Jean Talon outdoor market offers imported Italian products, fresh produce, cheeses and local Quebec specialties.

Toronto’s Little Italy is along the west end of College Street and is known as a popular shopping district. The large Italian population arrived in the early 20th Century with another wave arriving after World War II, but many did not stay in the neighborhood long. Today Little Italy is more Portuguese than Italian in population, but overall it is ethnically diverse. However the Italian presence lives on in the cafes, restaurants, social clubs and a vibrant nightlife. The other Italian neighborhood is the Corso Italia, with its high-end shops and cafes. Every July this neighborhood hosts the Corso Italia Toronto Fiesta.