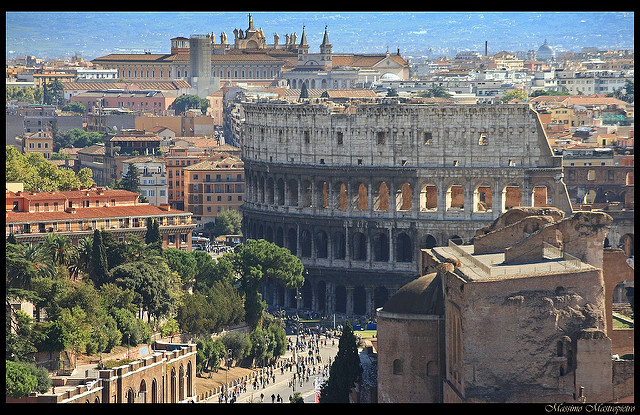 The Colosseum, undisputedly one of the most famous and recognizable Roman monuments on the face of Earth, has a long and interesting history.

In 2007, it became one of the Seven Marvels of the Modern World, in spite of not making any justice to its original self: commissioned around 70-72 AD by Roman Emperor Vespasian, the majestic Roman theatre was originally three times larger than what we see today and must have been even more breathtaking than we are used to.

Good, old Colosseum has been on the news quite a lot recently. After almost three years of restoration, its freshened up exterior was shown to the world in all its glory just over a couple of weeks ago. Its entire façade was freed from the signs of dust and pollution and brought back to its original color and beauty, thanks to an effort financed by Tod’s owner Diego della Valle, who donated a whopping 25 million euro (around 28 million USD) to carry out a complete revamping of the building, which will include also a series of structural interventions, inside and outside.

“Viva il Colosseo!” then: so what better opportunity than celebrating its little “facelift” to discover something new about it? Read on and find out about naval battles, cruel emperors, mysterious flora and much more…

1.Its numbers are… colossal

It was built in an astonishingly short time (about five years) and an immense amount of travertine: to craft its exterior more than 100.000 cube meters (328.000 cube ft) of the stone were used.

As we said, the Colosseum was the brainchild of Roman Emperor Vespasian, even though its construction was ultimated by his successor, Emperor Titus. Both belonged to the Flavian dynasty and that is why its original name was Flavian Amphitheater.

So why do we call it Colosseum, then? There are a few theories about it: some believe the term became popular in the Middle Ages, because the theatre was just a stone throw away from Nero’s Colossus, a majestic statue of the Emperor no longer extant. Others think it derives its name from its very location, once occupied by a temple dedicated to Isis, ancient goddess of maternity and fertility: because of this, the place was called “Collis Isei,” which is Latin for “the hill of Isis.”

One last – rather terrifying – hypothesis (more legend than history, to be honest) says the spot where the Colosseum stands was once home to a temple used for demonic pagan worship. A ritual sentence would be at the root of the name: “Colis Eum?” (Do you worship it?), referring to a demonic god, which sounds eerily alike our own word “Colosseum.”

3. It was considered a door to Hell

If you thought the demon-worshipping people of above were intriguing, you are going to love this: at the height of its popularity, when gladiators used to fight there, the Colosseum developed a pretty sinister reputation. Because of the enormous amount of people dying in it on a regular basis (you know… those gladiator fights were pretty cruel and gruesome), Romans began believing one of the seven doors to the Otherworld was located there. In order to keep the souls of the dead at bay, many rituals were said to take place within its walls, often using the very blood of those who died in the arena. The obscure fame of the Colosseum continued in the Middle Ages, when it was routinely used as an impromptu cemetery for violent crime victims. During the Renaissance, it was said to be a favored spot of wizards and magicians, who thought the herbs and flowers growing in it had special powers.

Speaking of herbs and flowers…

This may come to a surprise to the majority of us, but the Colosseum possess a particular micro-climate which allows more than 350 different species of plants to grow spontaneously. Some of them are of exotic origin and not easily found anywhere else in the area. Botanists have been studying the amazing flora of the Colosseum for years.

Yes, you read right. For a certain amount of years, the Colosseum’s central arena was flooded through a complex system of wells and pipes running underneath its galleries, to allow sea battles to take place. In spite of being certainly amazing to watch, this peculiar form of Roman entertainment, called nauromachia, never became quite as popular as gladiators’ fights. Because, you know… nothing seemed to be as entertaining as blood then.

The sheer engineering value of the system which allowed to flood the Colosseum, however, remains an amazing feat of Roman technology: it took about seven hours to reach the water level necessary to fill the arena.

The Colosseum: so familiar, yet so mysterious at the same time.

Whichever legend and anecdote its millenial history carries within, the sense of awe and respect it arises in its visitors is, for many, as moving as a piece of beautiful music, the voice of talented soprano or the hug of a long-lost yet always cherished friend.