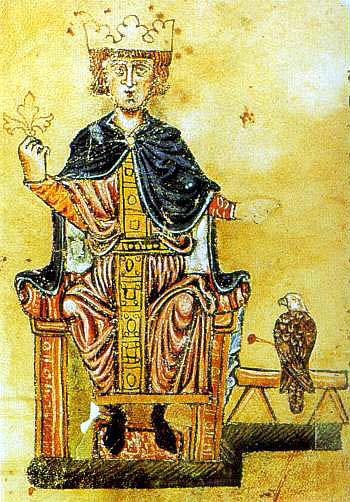 Frederick of Hohenstaufen (known in Italian as Federico VII Hohenstaufen di Svevia, Federico I di Sicilia, and Federico II del Sacro Romano Impero), was the larger-than-life King of Sicily, Holy Roman Emperor and (briefly) King of Jerusalem – a true legend in his own time.

Better known as Frederick II (Federico II), he was unlike any other Medieval ruler, possessing the mind of a scientist, the soul of a poet and the iron will of an autocrat. Much of Frederick’s fame in his own time stemmed from his brilliant mind, as his appearance was less than awe-inspiring. Muslim historian Sibt Ibn Al-Jauzi recounts that Frederick “…had red skin, and was bald and short-sighted. Had he been a slave he would not have been worth two hundred dirham.” It was a superior intellect, a passion for knowledge and bold political moves that led contemporaries to dub Frederick II “Stupor Mundi”, the wonder of the world.

One of Frederick’s more famous attributes was his attitude for languages. It is said that he could speak at least nine languages, including Arabic, which helped foster a friendly relationship with the Muslim inhabitants of both Sicily and the Holy Land. In a time when most European noblemen could only write their name, Frederick could write fluently in seven idioms: a feat that is still impressive today.

The rulership of Sicily and Southern Italy (later known as the Kingdom of Two Sicilies) was his main focus, as his German holdings were rarely visited after consolidating his power, so much so he left them to his son Conrad. He preferred the lavish court of Palermo with its alchemists, eastern astrologers, harems and its famous zoo: whenever Frederick left Sicily for Germany, Northern Italy or to put pressure on the Pope, the zoo went with him. Frederick was also responsible for the creation of the Sicilian School of Poetry, which would later inspire Dante and help create the modern Italian language. Unlike most of Europe at this time, Frederick had a reputation for being tolerant of both Jews and Muslims living in his kingdom, even allowing Jewish businessmen to charge interest on loans. This was at a time when, in places like Christian Spain, for instance, both Muslims and Jews were forced to convert, expelled or outright killed.

Frederick was certainly a free thinker, but this did not extend to concepts of freedom for his subjects: he was definitely an autocrat and imposed his power in the form of Imperial ministers, numerous military campaigns and massive castles that still dominate the countryside. His kingdom of Sicily was centrally controlled, highly regulated and effectively taxed, with a strict legal code, numerous duties aimed at merchants and anti-usury laws for lending money (only Jews were exempt). Frederick was solely in charge and any nobleman who tried to do things his own way would find an army at his doorstep soon after. As Holy Roman Emperor, he saw his duty more in the fashion of the Byzantine Emperors of the East, as God’s temporal representative on Earth and in charge of everything except for highly spiritual matters, which belonged to the church. This of course led to a lifelong struggle with various Popes, as it happened to so many Holy Roman Emperors before him: he was, in fact, excommunicated twice.

Frederick was considered many things in his time: an Islamic sympathizer, a heretic, even the antichrist (by Pope Gregory IX), even if he did perform his duty as Holy Roman Emperor by leading a Crusade to free the Holy Land. However, he did it on his own terms and not the Pope’s, which led to his excommunication before leaving. Frederick went anyway and, in an unbelievably remarkable act of diplomacy, he actually captured Jerusalem without spilling blood, something the military might of Europe had not been able to accomplish since losing the city in 1188. This gained the Emperor much respect among the courts of Europe, but the Pope seethed at the audacity of Frederick. It took the Pope over two years to reluctantly lift the ban on Frederick, cancelling his excommunication.

While in the Holy Land, Frederick was greatly respected by Muslim leaders not only for his ability to speak and write fluent Arabic, but also because of his seeming desire to convert to Islam. He never did and it seems that he was only paying lip service in order to have a diplomatic advantage. However, according to Muslim chroniclers, Frederick left a lasting impression of a man who was more inclined to the East than to the West. During his brief stay in Jerusalem, Muslim authorities suspended the famous call to prayer out of respect for the Christian Emperor. However, Ibn Wasil, a Muslim chronicler, recorded that Frederick was unhappy with this and stated that “my chief aim in passing the night in Jerusalem was to hear the call to prayer given by the muezzins, and their cries of praise to God during the night”.

In reality, Frederick seems to have been neither a devout Christian, nor a Muslim sympathizer or an Atheist, but rather a religious pluralist – taking what he liked from religion and philosophy and discarding the rest. His mockery of Christian practices was well known in his own time, but may also have been exaggerated and later elaborated on after his death.

Frederick had no love for Christian heretical movements such as Catharism, and persecuted them in his lands. Yet, he was known to hold a deep interest in astrology, alchemy and the occult. His Castel del Monte in Apulia, known for its octagonal design, may have indeed had an occult or alchemical significance, as the octagon represents the transition between the circle of the sky and the square of the earth. Frederick was a worldly man and insatiably curious about virtually everything, and yet on his deathbed he wore the un-dyed wool tunic of a Cistercian monk, his skepticism apparently losing out to a serious concern for his immortal soul. Even with his controversial lifestyle and interest in mysticism, it was not the Catholic faith that Frederick was truly at odds with, but rather the various Popes that challenged his authority over his reign.

Frederick was a conundrum for thinkers of his time, as he dabbled in the occult and was openly skeptical of religion, yet persecuted heretical Christian sects with zeal. He founded institutions of learning such as the University of Naples and the Sicilian School of Poetry, an apparent contrast with the huge fortresses he built to display his unquestioned political and military authority. Frederick was praised by Muslim chroniclers, vilified by the Papacy and secretly admired by much of the European nobility. His complex personality, his lust for knowledge and his belief in questioning everything (in a time when most people questioned nothing) make Frederick II a true Renaissance man, albeit three centuries too soon.

Great summation of Frederick II, undoubtedly one of the most intriguing European monarchs of all time. I wish more people knew of this man, and his contributions to modern society (like the separation of the roles of doctor and pharmacist, so as to avoid the obvious conflict of interest issue).