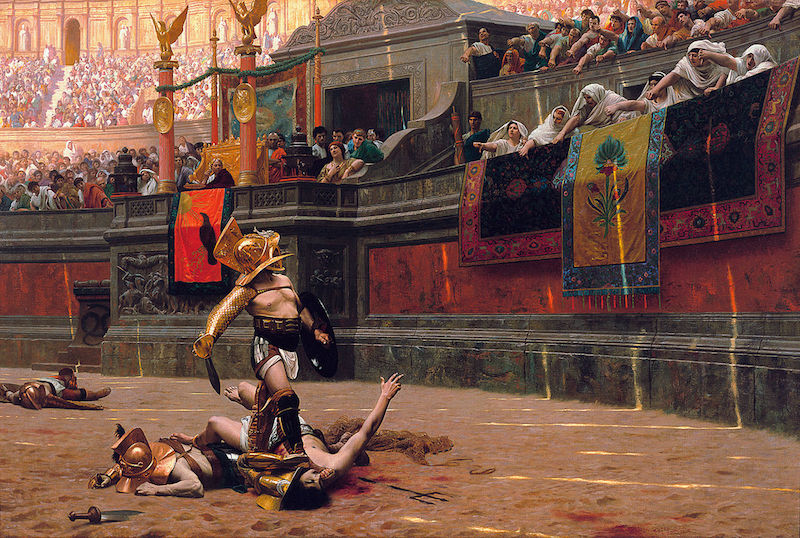 Little known facts about Rome’s own most famous athletes

Who doesn’t remember Russell Crowe as Maximus, the strong, loyal general who becomes a gladiator and sacrifices himself to free Rome from the tyranny of Commodus, interpreted by the handsomest Joaquin Phoenix to have appeared on the big screen?
Historically speaking, the movie was not particularly accurate, but it was entertaining, well acted and with a great music score. It also had the merit to bring back to the cinema the epic “sword and sandals” genre of 1950s colossals, who had made Cinecittà known all over the world. It also gave a little insight into the lives of Rome’s own arena fighters, gladiators: often relegated in history books to little more than a colorful side note, these men (and, we will see, women) were in many a way mirrors of the society they fought to entertain.
The topic of gladiators, I can assure you, is particularly liked by Italy’s history press, with quite a number of articles having appeared in recent years in more than one publication.
Here ‘s for you a selection of the most curious facts about Roman entertainment’s glory and pride: gladiators.

A gladiator’s average age was comprised  between 20 and 35, with the largest number of them being around 30. Their height? A mere 1.68 cm (about 5.5″), which was however very normal for the time.

Gladiator fighting was much more than mere entertainment in Ancient Rome. According to historians, their popularity – and that of their fights – served the political class well, as they were strategically used as a means of propaganda or as a manner to bring people’ s attention away from real, more urgent issues. Juvenal said it well, when he wrote that all you needed to conquer the heart of the masses was panem et circenses, bread and arena fighters.
Historian Luciana Jacobelli explained to Focus Storia, one of Italy best selling history monthlies, that gladiatorial games became, especially in Imperial Rome, an excellent means of publicity. They became so important within the socio-political fabric of Rome that newly elected magistrates, when having to abide to the legal request to either finance the building of a new structure or organize and pay for gladiatorial games, they usually chose the latter, because they guaranteed better publicity.
Certain things never really change…
It’s common misconception that only slaves, former slaves or prisoners became gladiators, but that wasn’t the case. Many free Romans entered the world of arena fighting, with the supervision of specialized gladiators managers. A sort of Don King of the time.
As popular as they were in the arena, gladiators were social outcasts, holding a position not different from that of actors and prostitutes.
Well… whomever they wanted and, in fact, they had quite a pick. Gladiators were immensely popular among Roman women, even the richest and noblest of them. It is not unknown of wealthy and respectable matrons keeping a lusty gladiator under their sumptuous sheets, as history itself teaches us: Eppia, wife or a powerful senator, fled her home and family with a gladiator, inhebriated by the dream of a life lived in the arms of a strong and slightly brutish hunk.
Indeed they did. Some Roman women, keen on fighting and the arts of war, actually freely joined gladiatorial teams. They were not many, but historical sources do exist in support of this fascinating theory.
Yes, the reversed thumb: one of the most iconic gestures associated with the world of gladiatorial fights and Roman arena games. Chances are it was never used: sources demonstrate emperors likely enclosed their thumb in the fist to save the life of the loosing gladiator, mimicking the act of putting away a sword. If they chose to send him (or her) to Avernus, they rose the thumb, Fonzie-like. More often than not, however, losers were graced and their life spared. Which brings us to the next interesting fact…
When it came to gladiatorial fights, spectators were not really after the death of one of the contestants. They usually came after executions and beast fights, both gruesome and gory, so the audience would have had their blood thirst satiated by the time gladiators came into the arena. What people really wanted was good, entertaining fights, with talented gladiators who respected fighting rules.
Well, gladiators were no hipsters. Let’s just say that the study of bones recovered in Ephesus, conducted by Austrian expert Karl Großsmith, shows gladiators mostly gained their proteins from vegetables and not meat. Their diet was rich in pulses and grains like barley, so much so they were called hordearii, that is, “barley eaters.” Lack of meat from their diet, however, was not likely a choice, but mirror to the typical diet of your average Roman, for whom meat was not often on the table. Wealthiest families may have had it more often, but gladiators, unless they supped often with their rich lovers, were not likely to eat like senators very often.
Their diet was poor in animal protein, yet their bones, according to research, were twice as strong as those of your average Roman, and their muscular strength is pretty much demonstrated by their very own job. So how did gladiators manage to be so strong, for so long? A group of researcher from the Medical University of Vienna, led by forensic anthropologist Fabian Kanz, examined the same gladiator bones from Ephesus studied by Großsmith and found out they contained twice as much calcium and strontium than bones of non- gladiators recovered at the same location. Scientists have thus hypothized gladiators may have made large use of a drink known also by Pliny the Elder, who mentions in in his Naturalis Historia, made with water, vinegar and wood ashes. Wood ashes would justify the high percentage of strontium in the bones.
Not all of them, but matrons, especially if no longer spring chickens, did. An archaeological discovery made in 2004 near London, allowed scientists to recreate a Roman face cream. The little tin box found by archaeologists was still filled with its perfectly preserved content, which gave the opportunity to conduct a full analysis on it. The cream contained animal fat, probably cow’s or sheep’s, starch and tin dioxide. Starch and animal fat were mixed together to obtain a compound similar to modern day hand cream, tin dioxide was added to make it translucent and add whiteness to the skin.
Being pale was a trend at the time: Victorians didn’t discover anything new.
0 0 vote
Article Rating
Subscribe
Login
1 Comment
Newest
Oldest Most Voted
Inline Feedbacks
View all comments
Andrew

This information was very useful. I hope whoever made this feels accomplished.