American children are taught without question that Alexander Graham Bell, a Scottish immigrant invented the Telephone.

However as they progress in school it is often learned that this invention was hotly contested between two rival inventors: the eventual winner Bell, and another man named Elisha Gray. Both men filed for patents on a telephone device on the same day, but while Gray filed a patent caveat (an intention to file a real patent), Bell filed for a full patent. In the end Bell won the case even though his device resembled Gray’s more than his own design.

Interestingly, this is only part of the story as there is an even older claimant, an Italian that was already developing a speaking telegraph when Alexander Graham Bell was still an infant. His name was Antonio Meucci and his brilliance and ingenuity has gone unrecognized for far too long.

Antonio Santi Giuseppe Meucci, born in Florence in 1808 was a highly inquisitive man and lived a life of constant experimentation. He studied mechanics, drawing, chemistry and physics for six years at the Florence Academy of Fine Arts. Meucci’s gift for invention was evident at an early age as he created an improved chemical propellant for fireworks when he was eighteen. While working at Florence’s Pergole Theatre, Meucci met his future wife, a seamstress named Ester Mochi and they soon married. Due to his involvement in the Italian reunification movement, Meucci was constantly under surveillance by the Grand Duchy of Tuscany’s police forces and so immigrated to Havana, Cuba in 1835 to work as the Superintendent of Mechanics at the Tacon Theatre.

While living in Havana Meucci started experimenting with electricity including electroplating experiments and even a crude form of Electro-shock therapy he used to treat patients with headaches. It was during one of these experiments with electricity that he came up with a device that would change the world: his speaking telegraph, or as he called it the Teletrofono.

It all started when Meucci heard a patient’s voice coming through an electrically charged copper wire he was using for one of his treatments. This discovery immediately piqued his interests and he started experimenting with voice communication over wire in 1849. By 1850, he decided to move to New York to better exploit his new discoveries – and to escape the watchful eyes of the Spanish Governor of Cuba. Being both a supporter of liberty and a confirmed Freemason made Meucci a dangerous person in the eyes of the Pro-Spanish Government of Cuba and so left for the United States even though he could hardly speak English.

Meucci arrived in Staten Island, New York at the same time that the hero of Italian reunification movement, Giuseppe Garibaldi also landed in the city. The two became fast friends, both sharing ideas on liberty and a desperate need for cash. Even though he arrived fairly wealthy, Meucci gave much away to Italian refugees and in support of Garibaldi. Meucci quickly got to work finding a way to make an honest living for himself and the growing Italian immigrant community and came up with America’s first smokeless candle at his New York Paraffin Candle Company. It did not make him rich, but it allowed for Meucci’s continued experimentation with his Teletrofono, that is until much of this money and property was lost after being swindled by false creditors.

A tragic case of rheumatoid arthritis crippled his wife Ester, but necessitated the creation of a working prototype of his invention in order to communicate with her within his home. Just when it seemed that Meucci was about to become a household name, even more tragedy struck as a Staten Island ferry explosion would leave him hospitalized and further impoverished. After recovering, he would discover that Ester had sold off his prototypes in order to keep away from complete bankruptcy. Meucci was devastated, but still persevered and in 1871 he borrowed twenty dollars in order to ensure a patent caveat since he could no longer afford to register an official US patent. Even though Meucci beat both Gray and Bell by nearly five years, it was his inability to afford a full-fledged patent as well as his poor English that allowed his ideas to be at the least, neglected and at the worst, stolen.

In an attempt to make his invention known and to produce patents in the US and Europe, Meucci found three financial backers and founded the Teletrofono Company in 1871. Unfortunately for Meucci, the group split a year later without success short of renewing his patent caveat. Once again short of funds but undaunted, Meucci approached an affiliate of the Western Union Telegraph Company in order to test his designs on their lines. After two years, all Antonio Meucci had to show for this effort were delays, excuses and the eventual disappearance of his materials. Meucci was now left without the funds ($20) to renew his caveat for 1874, his materials were most likely stolen, and he never even got to test his design. When Alexander Graham Bell finally filed his patent in 1876, Meucci’s patent caveat was two years expired, making his battle for recognition even more difficult. 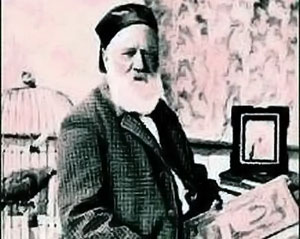 In the years after receiving the patent, Bell was subject to numerous lawsuits by claimants to the invention of the telephone, including Antonio Meucci and later the US Government. After years of delays, The United States Government vs. The American Bell Telephone Co. and Alexander Graham Bell was started in 1886 but further complicated by countersuits brought against Meucci by the wealthy Bell. However through his descriptions (given by an interpreter), over 24 affidavits (including one from the man who bought his models from his wife), a copy of his original caveat and models he was able to construct, Meucci gave a very strong argument. However it has been reported that the judge in the case was a shareholder in Bell’s company and delayed the outcome of the case year after year until Meucci’s death in 1889. The Government kept up the case, still upholding that Meucci was the true inventor of the telephone until 1897 when it was finally closed without a decision. The case was later appealed to the Supreme Court by the Globe Telephone Company to uphold Meucci’s claim but was dismissed in 1892.

Until recently, Antonio Meucci has been neglected by nearly all, mere footnotes in the fields of Science and Italian history. His house on Staten Island is more known for Garibaldi than Meucci and his contributions have mostly gone unnoticed. Hopefully that is starting to change as in 2002 the US Congress passed Resolution 269, finally recognizing Antonio Meucci as the true inventor of the Telephone. The genius of Meucci should be rightfully acknowledged not only as a telecommunications pioneer, but also as a great Italian who deeply cared for his countrymen and supported a unified and free Italy.