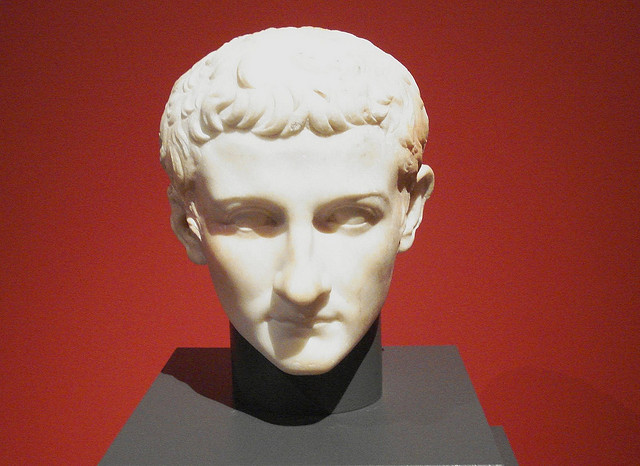 Gaius Julius Caesar Augustus Germanicus was born on August 31, 12 AD. He was the third of the six children that were born to Caesar Augustus’ adopted grandson, Germanicus, and his granddaughter, Agrippina. He was born in the ancient town of Antium (modern Anzio), which was located in Central Italy, near the Tyrrhenian Sea. Nero, another of Rome’s infamous emperors, was also born in this resort town with a strong fishing tradition.

From the beginning, the youngster’s life was not exactly normal.

As a baby, he accompanied his parents on military campaigns in the north. He even had a miniature soldier uniform to wear on such excursions. It’s from the caliga, the sandal, or ‘soldier boot’ that went along with this outfit, that Gaius Julius Caesar Germanicus got the nickname which the world knows him best by, Caligula. Caligula is rumored to have hated this name; however, he wasn’t exactly fond of Gaius either.

Regardless, Caligula’s childhood was, by all accounts, an unhappy one. Tensions ran high within the empire and between factions of the Julio-Claudian dynasty. There was some confusion as to whom had rightful claim to be emperor. This led to lots of intrigue, paranoia, violence and bloodshed. Caligula’s father, Germanicus, died under suspicious circumstances in the year 19 AD. Agrippina’s relationship with the emperor, Tiberius, her children’s grand-uncle, became strained as a result.

Caligula was sent to live with his great-grandmother, Livia. After Livia died two years later in AD 29, he was then forced to live with his grandmother, Antonia. Neither woman seems to have taken much of an interest in Caligula. He turned to his sisters, Agrippina the Younger, Drusilla and Julia Livilla, for comfort. Rumors surfaced that his relationships with his sisters, especially Drusilla, may have been incestuous.

Problems for the family

However, Caligula and his family had other problems to contend with besides rumors. Tiberius’ Praetorian Prefect (Commander of the Emperor’s special force of bodyguards), Sejanus, wanted to become emperor himself. Not only was Tiberius himself in danger from this man, but also Caligula and Caligula’s entire family. As Tiberius neared the end of his reign, Sejanus had control of Rome in all but name, really. Tiberius, for his part, had semi-retired to the island of Capri.

Sejanus denounced Agrippina, Caligula’s mother, and two of his brothers, Nero and Drusus (Caligula’s other two brothers, Gaius Julius and Tiberius had already died in childhood). Agrippina was exiled to the island of Pandataria (Ventotene) in the Tyrrhenian Sea, off the coast of present-day Campania. She died of starvation either at her own hands or upon orders by the emperor. Sejanus had told Agrippina that Tiberius was trying to poison her some years previous. She refused food from his hand. This upset Tiberius very much and is most likely what lead to her demise.

Nero and Drusus were banished to Ponza (Isola di Ponza), the largest of the Pontine Islands in the Tyrrhenian Sea. Drusus was supposedly found clinging to his mattress to stave off hunger pains. He had starved to death like his mother, apparently. Nero’s death was most likely due to some violent act although history doesn’t seem to know what exactly happened to him. Regardless, the horrific deaths of his family members must have had an impact on young Caligula.

By the time his mother and brothers had died, Caligula was living with Tiberius in Capri. Tiberius had sent for the young man personally. It seems that without any real guardianship Caligula indulged in some salacious activities. Rumors abound about his behavior at this time. What is fact is very hard to discern from the fictions of enemies and naysayers, however. Regardless, this time in Capri did much to taint Caligula’s reputation.

Caligula did what he could to serve Tiberius and appeared indifferent to the deaths of his family members. As Caligula once stated, this demeanor was an act that was carefully constructed to keep himself alive. There is reason to suspect that the young man would need to go to such extremes to survive in the difficult situation he found himself in.

At any rate, in AD 33 Tiberius gave Caligula the position of quaestor. Quaestors were usually elected officials who handled the treasury and other financial affairs affecting the Empire. This was the only public office Caligula would hold until he became emperor in AD 37. Upon Tiberius’ death in March of 37, Caligula and his cousin, Tiberius Gemellus, became joint heirs of the Empire.

Caligula, with the support of the new prefect of the Praetorian Guard, Naevius Sutorius Macro, became sole emperor. He declared Tiberius’ will null and void on the grounds of insanity, thus destroying Gemellus’ chances to share emperor duties with him. He also adopted Gemellus and would denounce him publicly in less than a year’s time.

All accounts suggest that Caligula’s early reign was met with much approval and aplomb. He gave cash bonuses to the Praetorian Guard and gave amnesty to political prisoners and their families whom Tiberius had denounced. He recalled exiles and declared that the treason trials Tiberius had begun in his paranoia as a thing of the past. Caligula also had his mother’s remains brought to him so that he could give them a proper burial in Rome.

With such a popular and auspicious beginning to his reign, it is amazing that in less than four years Caligula would be dead, murdered by the same Praetorian Guard who helped him rise to power. By all accounts, Caligula was insane. This insanity caused even his most ardent supporters to turn against him.

Some say that Caligula was born insane, others feel that his insanity was a direct result of a mysterious illness, a sort of ‘brain fever’ that he developed in October of 37 – less than six months after becoming emperor. Upon his recovery, there was much rejoicing. This – like Caligula’s reign – would be short-lived.

At the beginning of AD 38, Caligula forced Gemellus and Gaius Silanus, his father-in-law, to commit suicide. He accused them of treason after he had pronounced doing away with such activities. Later that year, he did away with Macro, the same Macro who helped him become emperor. Caligula must have felt that the former Praetorian Guard was becoming too powerful. He sent Macro to Egypt under the pretense that he was to become prefect of the guard in that land. There, Macro was imprisoned and executed.

Drusilla, Caligula’s favorite sister and rumored lover, died in AD 38. He had her declared a deity. He also had a floating bridge built from the resort town of Baiae (Baia in the Bay of Naples) to Puteoli (Puzzoli) only two miles away. This was so he could cross the bridge on his horse. This was in response to an astrologer’s prophecy which said that Caligula had as much ‘chance of becoming emperor as that of riding a horse across the Gulf of Baiae.’

Caligula also ordered an altar to be built in his honor. He asked for a statue to be brought to the Temple in Judaea so that he could be worshipped there as well. They felt he was taking things too far. Caligula did other strange things, as well. One story included his trying to make his horse, Incitatus, a consul. He supposedly said that the horse could ‘do no worse a job than those who were already in the position.’

Caligula was quite a spendthrift. He spared no expense on games, ceremonies, pomp and circumstance. By A.D. 39, the imperial treasury was virtually bankrupt. So he fully revived Tiberius’ treason trials so that he could take the property and funds of his enemies. He also auctioned off public property to fill the imperial coffers.

On the military front, he didn’t fare much better. Although Mauretania (a Berber kingdom of the Mauri tribe, loosely corresponding to Northern Morocco and Algeria) was annexed, there was trouble in Palestine, Alexandria and in the Northern provinces. Caligula considered expanding into the German lands as his father had tried to do. He also considered a British expansion but seems to have never moved forward with this idea at all.

At one point, Caligula took his sisters and Drusilla’s widower, Aemilus Lepidus, with him to visit the German provinces. Once there, he had Lepidus put to death along with Gaetulicus, a member of his guard who was commander of the forces in Germany. He had his sisters’ property taken away and exiled them.

To the outside world, it seemed as though Caligula was more than a bit paranoid, but he obviously had reason to be concerned. In 41 AD, Caligula was assassinated by members of his own Praetorian Guard. The Praetorian Guard seems to have had personal – and political – reasons for their actions. The conspirators found support among the Senate. In fact, Caligula’s brother-in-law, Marcus Vicinus, Julia Livilla’s husband and a high-ranking senator, was instrumental in plotting Caligula’s assassination.

Caligula was murdered in a gruesome fashion on January 21, 41. He was ‘cut down’ by Cassius Charea, a member of the Praetorian Guard, and several other guardsmen. His fourth wife, Caesonia and his daughter were also violently murdered. It seems that Caligula’s life never stepped out of the shadows of intrigue, murder and violence in which it began. Whether he was truly insane or suffered from lasting effects of encephalitis, as some modern historians seem to suggest, we will never truly know.

Regardless, Caligula’s life was full of tragedy, violence and infamy. His name lingers on millennia after his death. It’s a name that’s synonymous with insanity, intrigue and more. Caligula is truly an infamous Italian, one who may never be fully understood.