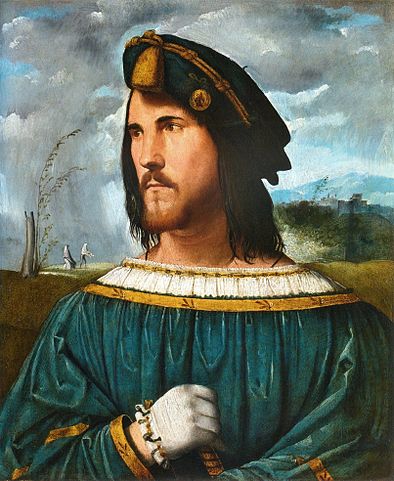 Cesare Borgia was born in 1475. He was the son of Cardinal Rodrigo Borgia, who would become Pope Alexander VI, and his mistress Vannozza de Cattani. He was also the older brother of Lucrezia Borgia. However, Cesare was probably the most infamous of all the Borgia’s. He is remembered for great cruelty and murderous tactics. He was even rumored to have killed his own brother.

Being illegitimate – a fact which could usually wreck havoc with one’s right to succession – did not prove to be a problem for Cesare.

Cardinal Rodrigo made no secret about who his children were – and who he expected them to become. In 1480 Pope Sixtus IV assured Cesare’s future even further by releasing a papal bull (decree) which allowed him, while still a child, to receive benefices – income from offices the Pope appointed him to. By the time he reached the tender age of nine, Cesare’s offices included prebend of the cathedral chapter of Valencia, dignitary of the papal chancellery, rector of Gandia, provost of Albar and Jativa and treasurer of Cartagena. These properties were, of course in Valencia, Spain, the region from which Cardinal Rodrigo came. Cesare’s possession of these offices was granted by the pope as a favor to Cardinal Rodrigo and as a means to ensure that these holdings would remain in the Borgia family.

Cardinal Rodrigo would be crowned Pope Alexander VI in the year 1492. By then, Cesare was already being groomed by his father and his family for a career in the Church. This became blatantly clear to Cesare when his stepbrother, Pedro Luis, from his father’s dalliance with a former mistress, died. Pedro Luis’ duchy – he was Duke of Gandia – was given not to Cesare but to his younger brother Giovanni (Juan). Every detail of Cesare’s life was planned for by his father. He, with his siblings, was moved from his mother’s home. He was educated in Rome until the age of 12. At that time, Cesare was sent to Perugia where he studied law and humanities at the university. After that, it was on to the University of Pisa where he studied theology. By the time he finished this, Rodrigo was already pope. Cesare was quickly made a cardinal.

In 1493, only a year after Cardinal Rodrigo became pope, Cesare and his siblings, Lucrezia and Giovanni, went to have dinner with their mother. The following day, Giovanni’s body was found floating in the Tiber River. His throat had been slashed and his body showed other signs of violence. The rumor that Cesare, who was still a cardinal at the time, murdered his brother widely circulated.

Giovanni already had a son by this time. That son became the Duke of Gandia, not Cesare: he would have had nothing to gain by this murder. However, history has no proof either way. Regardless, during his lifetime, many people believed that Cesare had killed his own brother. This belief did not seem unfounded given some of his future exploits.

It seemed that a career in the Church was not to be for Cesare. As a layman, he could be given princely positions and holdings that he could never receive as a man of the cloth. Cesare seemed eager to leave the Church. In 1498 he did so. While stile a cardinal, Pope Alexander VI began making marriage arrangements for Cesare. The Borgias had their eye on Carlotta, the daughter of the king of Naples because she would bring the rich city of Taranto with her as part of her dowry. Cesare renounced his holy orders and became Duke of Valentois.

Unfortunately, the king of Naples had other plans for Carlotta. She was wed to another man. Pope Alexander formed an alliance with King Louis XII of France. Louis XII had claims to both Milan and Naples. Louis XII promised Cesare a princess. The pope only had to annul his marriage. It was done and Cesare married Charlotte d’Albert, the duke of Guyenne’s daughter. According to a letter Cesare sent to his father, the marriage was consummated no less than eight times on their wedding night alone!

Cesare became one of King Louis XII’s leading generals and a commander of the papal armies. He subdued the lands of Romagna, which were situated near the Papal States. One of Cesare’s most infamous exploits included his triumphant re-entry into Rome after this victory. He dragged Caterina Sforza, a powerful lady and mistress of cities he had just captured, into the city behind him. She was shackled in golden chains.

In the year 1500 Cesare killed five bulls in St. Peter’s Square. Cesare was also rumored to have shot unarmed criminals. He sentenced a Venetian who wrote a pamphlet criticizing his exploits to drown in the Tiber. Other rumors were much more salacious. In fact, Cesare is the person who is reported to have murdered his beloved sister’s second husband, Alfonso, the Duke of Bisceglie. He strangled Alfonso, the nephew of the king of Naples, while the young man was in his sick bed. At the time, Alfonso was recovering from stab wounds which were inflicted on him during a sneak attack just outside the papal palace, an attack that Cesare supposedly ordered.

After becoming duke of Romagna (1501), Cesare continued his military exploits. He seized Piombino, Elba, Camerino and Urbino in 1502. In 1503 Cesare’s career would take a horrible turn for the worse when his father, Pope Alexander VI, died of a mysterious illness. Sources insinuate that he was poisoned by enemies. Cesare’s enemies came out in full force now that he did not have the pope’s protection. King Louis XII, who had been a powerful ally, also turned his back on the brutal Borgia offspring.

Julius II had become pope by this time. He was strictly against nepotism and ordered Cesare to return his lands to the papacy. He was imprisoned for a short time then returned to Naples. Upon his return there, Cesare was sent to Spain and imprisoned again. He escaped in 1506 and found refuge in the court of the king of Navarre, who happened to be his brother-in-law, Jean d’Albret. He died in 1507 while fighting for the Navarrese king in the city of Viana. The cause of death was probably malaria and not, as has often been suggested, poisoning.

Cesare Borgia was only 31 at the time of his death. However, he had packed a great many years of treachery, violence and drama into that brief period. His life and legacy remain thanks (or no thanks) to his friend, Niccolò Machiavelli, who used Cesare’s exploits to illustrate what a Renaissance statesman should do, in his classic book, The Prince.

Cesare Borgia didn’t die of malaria; he was murdered by men of the city he was trying to take in his king’s name.