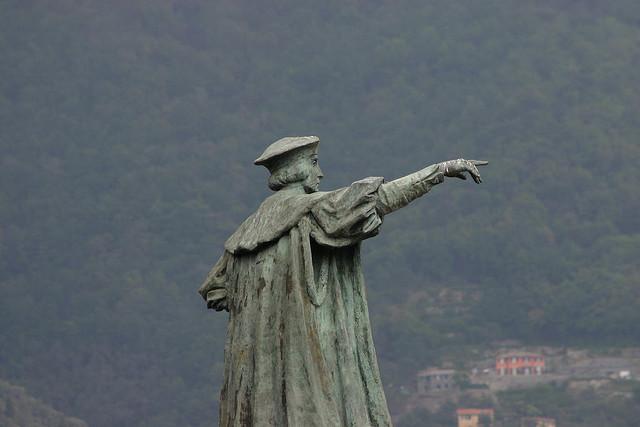 It is a small world, but it was not always that way.

In no small part thanks to the Italian sense of adventure and profit, men and ships began setting sail and heading out over the far horizon. That great time period for Europe, known as the Age of Discovery would never have reached the heights it did without these master mariners.

With sea routes to the Indies established around Africa, the ports of Italy had lost their firm grip on trade, so it was time for these merchant sailors to find new opportunities. Their skills as navigators and seamen were unquestioned and for sale to the highest bidder: their maps of newly discovered lands were coveted by Kings and Conquistadors alike.

These are the most famous of the many brilliant Italian explorers that led to the discovery of the New World. Setting out in very small, slow ships on an angry, uncharted ocean, their endeavors seem to straddle the line between bravery and foolishness. There are certainly many others that history does not record since they never made it back, which makes the deeds of these men all the greater. However, it must also be remembered that their discoveries also led to the eventual conquest of these lands by Europeans, with all the ensuing consequences.

The mention of the voyages of Columbus bring about a wide range of opinions. To some a hero, to others a heartless villain, what is certain is that the Genoese born Colombo (Latin: Columbus) was an expert sailor, with enormous amounts of ambition and an ego to match. His demands to be named Admiral of the Ocean Sea, and his heavy handedness toward the native inhabitants attest to this. His ambition proved too much as he abused his powers, was imprisoned and although he died rich, he squandered much by his brutal ways.

However it often takes a man of such polarizing convictions to do what no other has accomplished. When the monarchs of Europe laughed at his idea to sail West to go East, he moved on to the next King. When he finally got a commission from Spain’s Ferdinand and Isabella, Columbus still had to convince sailors to join a crew that may never return. And it was Columbus who had the temperament to continue sailing on over the horizon day after day, when the crews of his three ships were on the verge of mutiny. The legacy of Christopher Columbus has been viewed differently at different times in history, but regardless of personal opinion, it is hard to argue with just how important this man in his moment in time was. Like him or not, Columbus helped shape our modern world.

Giovanni Caboto, better known to history as John Cabot, had moved to Venice at a young age, where it seems obvious he honed his maritime skills. By 1497, Caboto was hired to sail for England in the hope of reaching China, a goal he shared with his Italian countryman, Columbus. Neither of them found China or the famous Indies, but Caboto, by leaving from England, landed in North America, the first European since the Vikings to do so. Even though Columbus gets all the credit, he never set foot on mainland North America, mainly exploring the islands of the Caribbean. Columbus was convinced that he sailed to Asia until death. Caboto also had originally thought he reached China but he actually discovered – as far as England was concerned – a new found land, which is still named in reflection of Caboto’s discovery: Newfoundland. Caboto, in a second attempt to venture across the Atlantic with a larger fleet, was never heard from again.

It seems exploration ran in the Caboto family as his son, Sebastiano Caboto was a well-known navigator and cartographer in this time. Better known as Sebastian Cabot, he sailed for England as well as Spain, looking for the fabled Northwest Passage, a shortcut to the Indies and China. The younger Cabot also is known for one of the earliest circumnavigations of the globe after Magellan.

Not much is know about the life of Verrazzano, except that he came from the area around Florence and by the early years of the 16th century he had moved to Normandy, France. Like other famous Italian explorers, Verrazzano sailed for the major European powers of the time, in this case, the King of France. During his voyage to the coast of North America, he searched for the elusive passage to China, and although he is not so famous as Henry Hudson, he is the first European to visit the New York Harbor. His explorations included Rhode Island’s Narragansett Bay and parts of Cape Cod. Although today he is mostly forgotten, there are a few testaments to his voyages. Visitors to the New York City area can travel along the Verrazano suspension bridge – one of the longest in the world.

Vespucci was of Florentine origin and had made several voyages to the New World in the early 16th century. Although historians dispute just how many voyages he made, and what role he played, Amerigo Vespucci must have been an expert sailor since he was named Chief Navigator for the Kingdom of Spain. He was a well-known cartographer in his time and at his school for navigation in Seville, he had Ferdinand Magellan among others, as a student.

Today it is not his voyages that are remembered, but possibly his first name, as in North and South America. Mapmakers of the time may have used the female version of Amerigo Vespucci’s first name to the ever growing discovery of new lands. It was becoming obvious that China and the Indies were still farther off and these new lands, once known vaguely as Terra Nova or Terra Incognita, were now being labeled: America.

However, there is debate on the actual nature of the name America. A competing theory suggests that the name originates from a Welsh surname: Americk. This theory claims that America was named in honor of Richard Americk, who just happened to be the financier of John Cabot, aka Giovanni Caboto.

Good point! We should probably review and complete this article. Paolo