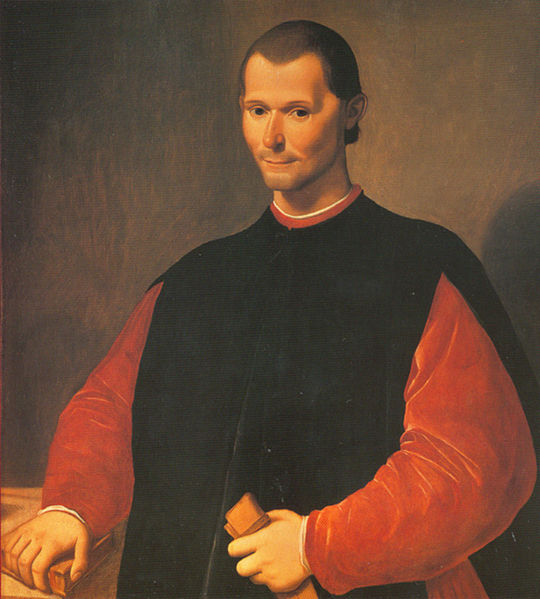 “They were freer than their forefathers in dress and living, and spent more in other kinds of excesses, consuming their time and money in idleness, gaming, and women; their chief aim was to appear well dressed and to speak with wit and acuteness, whilst he who could wound others the most cleverly was thought the wisest.”

Niccolò Machiavelli (May 3, 1469 – June 21, 1527) was a statesman, philosopher, theorist, and writer. Born in Florence as the second son of reputable lawyer Bernardo di Niccolò Machiavelli, he was part of the Florentine nobility. He served in the free Republic of Florence for four years, then becoming Chancellor and Secretary to the Second Chancery. He was sent to France in 1500 to get the terms from Louis XII to continue the war against Pisa, and in 1503was  sent to Rome to watch the election of the successor to Pope Pius III.

Machiavelli saw the new Pope, Pope Julius II, ruin Cesare Borgia. It was this pope that Machiavelli was sent to when the Pope was beginning his enterprise against Bologna, and was the reference to Pope Julius that Machiavelli moralized in the resemblance between fortune and women. In 1511 Pope Julius II formed the Holy League against France and held Florence at his mercy, stating that the Medicis should be reinstated.

When the Medicis returned, Machiavelli was accused of conspiracy against them. He was imprisoned and tortured till the new Medici pontiff, Pope Leo X, secured his release. It was then he turned to literature. His most famous work, Il Principe (The Prince) was written to try and improve the conditions in Italy. In 1520 he was commissioned to write the History of Florence at the request of Cardinal de Medici. This work took five years to complete. It was this work he took to Rome to present to Pope Clement VII (Giulio de’ Medici). When the Medici family was again ousted from power, Machiavelli returned to Florence to regain his former office of secretary to the “Ten of Liberty and Peace”. It was on this quest that he died after illness. Today the term “Machiavellianism” is seen to represent narrow self-interested behavior by interest groups.

Machiavelli died, in Florence on June 22, 1527, and was buried in Santa Croce.

A man of acute awareness, observation, dedication and literary genius. His work, The Prince, is still read by high school literature students everywhere. After four centuries this work is still the constant debate over the rulers and those who are ruled. Its ethics cannot be questioned and it will never go out of date. It was here that Machiavelli, who traveled to sit with Popes and was born of nobility, found his calling.