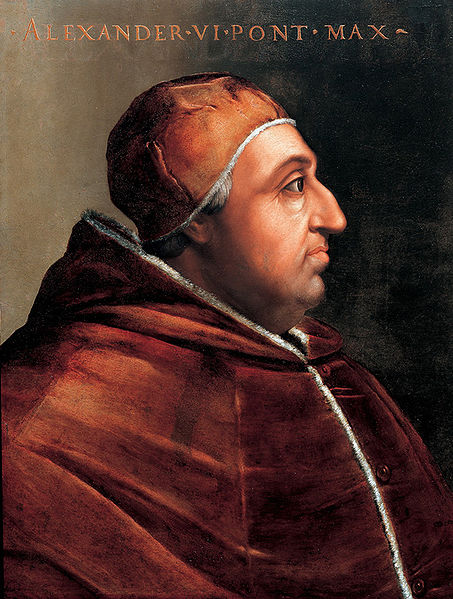 Rodrigo de Borja was born in Xàtiva, near Valencia, in Spain on January 1, 1431. In Italian, he is known as Cardinal Rodrigo Borgia; or more commonly as Pope Alexander VI, the successor to Innocent VIII. Rodrigo’s mother was Isabella Borja and his father was Joffre Llançol. Rodrigo chose to take his mother’s surname in honor of his maternal uncle, Cardinal Alfonso Borja (or de Borya) (Pope Callixtus III).

When Callixtus became pope in 1455, Rodrigo decided that the Church would be a great place for him to realize his lofty ambitions. Luckily for young Rodrigo, his uncle took him under his wing. Callixtus sent Rodrigo to Bologna where he studied law. At the age of 25 in the year 1456, Rodrigo was appointed Cardinal Deacon of St. Niccolo in Carcere. The following year he was made vice-chancellor of the Holy See. The position of vice-chancellor afforded Rodrigo the opportunity to amass great wealth. It’s interesting to note that Rodrigo became a cardinal and the vice-chancellor at least a decade before he finally took Holy Orders. He became a priest in 1468.

Around the time that Cardinal Rodrigo took up with Vannozza de Cattani, the mother of four of his seven children, including Cesare and Lucrezia Borgia, who are infamous in their own right, he was appointed Cardinal-Bishop of Albano. In 1476 – a year after Cesare was born – Rodrigo became Cardinal-Bishop of Porto and Dean of the Sacred College. Throughout this entire time, he retained the vice-chancellor position and appears to have done well in that post.

By the time he became Pope Alexander VI in 1492, Vannozza had been replaced as his mistress by Giulia Farnese, who was also a close friend of his daughter, Lucrezia. The conclave that elected Cardinal Rodrigo Borgia was a corrupt one. The new pope seemed to have bought his title with bribes and other ‘questionable’ practices. Pope Alexander VI used the papacy to push forth his ambitions for himself and his children. He named Cesare, who was only 18 at the time, and Alessandro Farnese, the brother of his lover, Giulia, as cardinals.

The pope was also busy arranging a marriage for his daughter, Lucrezia. Previously, he had considered wedding her to two young noblemen; but, as his stature rose, so did his desire for a more advantageous match. Throughout his life he would arrange no less than three marriages for Lucrezia. The first of these was to Giovanni Sforza, nephew of the Duke of Milan. This took place in 1493.

Pope Alexander VI  hoped to secure the Papal States and his family’s position of influence in Italy and Spain through strategic marital alliances for his children. One of his other sons, Juan, was made the Duke of Gandia in Spain. He married Maria Enriquez, the cousin of King Ferdinand VI of Castile. Another of his sons, Jofre, was married to Sancia, the granddaughter to the king of Naples. Clearly, Alexander, like other powerful men of his time, used the unions of his children to further his own ambitions as well as theirs.

Alexander wanted to keep Italy safe from French invasions. In 1494 Charles VIII of France did invade and staked his claim on the kingdom of Naples. Charles begged the pope to interceded and support his claim. He did not; and, with an alliance that united the rulers of Milan, Venice and the Holy Roman Emperor, Alexander was able to drive Charles out of Italy.

However, tragedy would strike his own home very soon. In June of 1497 Juan was murdered. Many accounts blame Cesare for his death. Regardless, Alexander was beside himself with grief after the demise of his favorite son. Alexander announced plans to reorganize the papacy and rid the office and the Church of corruption, nepotism and a host of other ills. Unfortunately, his passion for the reform programs was short-lived.

In 1498, Charles VII died. Cesare was no longer a cardinal. Alexander scrambled to find him a suitable match. He turned his attention first to the king of Naples. His daughter, Lucrezia, had just wed the king’s nephew. However, the match between Cesare and Carlotta was not to be. The king rejected the Pope’s offer and married Cesare instead to a French noblewoman. This made Lucrezia’s union much less desirable. In 1500, Lucrezia’s husband was murdered in the papal palace. This is just one of the murderous crimes that the Borgia family was linked to during Alexander’s reign.

Therefore, by the dawning of the new century, it seems that Alexander’s behavior and the corruption in the papal court had become even more outrageous and scandalous than before. It’s obvious to many that Alexander had many enemies due to his adherence to the policies of corruption, nepotism, violence and licentiousness. In August of 1503, at the age of 73, Pope Alexander VI dined with several of his colleagues at Cardinal Adriano de Corneto’s villa. He died soon afterwards. Several other members of the party contracted the same illness, including Alexander’s son, Cesare. History is not clear on whether the pope’s death was a premeditated act or an act of nature. Regardless, Pope Alexander VI is remembered as much for his corruption and licentiousness as he is for his political acumen and ruthless ambition. He is a truly infamous ‘adopted’ Italian.