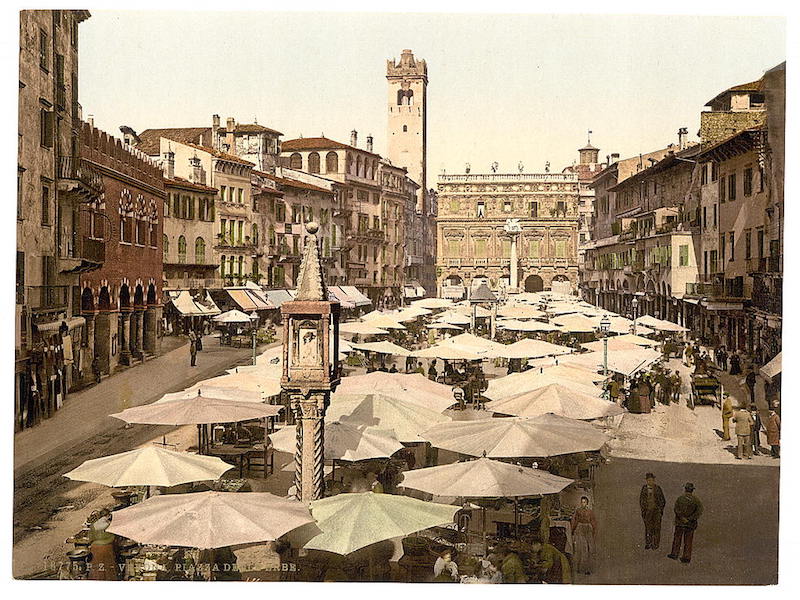 The newly unified nation of Italy (see Life In Italy during the 19th Century) faced several serious problems. It had a very large debt, few natural resources, and almost no transportation or industries. This combined along with a high ratio of poverty, illiteracy, and an uneven tax structure, weighed heavily on the people of the country. Regionalism was still strong at the time, only a small fraction of Italians had voting rights. The Pope was also angry because of the loss of the city of Rome and the Papal States and so refused to recognize the state of Italy.

In the Italian rural areas, banditry and several other problems resulted in repression by the government. The new Italian government was also known to be often brutal. During the 1880s a new movement started developing among the city workers. The huge differences between the impoverished, rural south of the country and the wealthly, industrialized north increased.

The government did not do much to solve these problems. Throughout the liberal period from 1870 to 1915, the country was governed by a series of liberal politicians who were not able to form a majority. Despite the fact that a little progress did happen before World War I in social and economic forms, Italy was at the time a nation in crisis.

Since the Nationalist Movement had begun in the country, leaders dreamed about joining the modern World Powers. In Northern Italy, industrialization and modern infrastructure facilities had begun to be built in the 1890s. The railway lines in the Alpine region connected the country to the rail networks in Austria, Germany and France. Two other coastal lines were also developed in the southern part of the country.

The larger industries and businesses were first founded with large investments from countries like France, Britain and Germany. Over the years, the government decided to help start various heavy industries in the country like shipbuilding, steel works and car factories. It even adopted a trade policy. Agriculture in the northern part of the country had been modernized, which started bringing larger profits, and were backed by many powerful co-operatives. However, the southern regions of the country remained ignored and undeveloped for a long time.

During the 19th and the early 20th century, the country made several attempts to join the super powers of the world in an effort to acquire colonies. However this was difficult for the country because of the large costs and the resistance going on in the country.

Several different colonial projects were started by the Italian government. These projects were undertaken to get support of the imperialists and the nationalists, who had always dreamt of building a large empire similar to the ancient Roman Empire.

Italy at the time had various sizeable settlements in Tunis, Cairo and Alexandria. The country first tried to get colonies by making negotiations with the world powers, which failed several times. Another approach tried by Italy was to send missionaries to investigate the areas which had been underdeveloped and uncolonized. The most promising ones were in the desert areas and distant parts of Africa.

Giovanni Giolitti was the first Prime Minister of Italy, chosen in 1892. However during his first term, the government collapsed quite quickly within just a year. He then returned to lead the government in 1903 which lasted till 1914. He had spent his life in the capacity of a civil servant prior to becoming the prime minister. Later he took positions within the Crispi cabinets.

It was believed that Giolitti mastered various practices like bribing, coercing and manipulating the government officials. Fraud in voting was also quite common in those times. Corruption had also been a major problem in the country in the early 1900s.

Southern Italy was in a bad condition before Giolitti’s tenure began in the country. More than half of the inhabitants in the area were still illiterate. There were problems with absentee landlords, rebellion, organized crime and even starvation in these areas. Thousands of Southern Italians were leaving the new nation of Italy every year during this time, hoping for a better life in America.

Italy had been neutral at the start of the First World War. It claimed that the Triple Alliance had just been for defense. However during the war, the Triple Entente as well as the central nations tried to lure Italy into the war. In April 1915 the government declared war on the Austro-Hungarian Empire. The country did so in order to get a few territories like that of Dalmatia, Istria and Trieste in return.

In 1917, Austria entered the lines at Caporetto after they received help from Germany. However, Italy and their allies stopped them at the Piave River. It was later during the battle of Vittorio Veneto that Austria-Hungary began negotiating terms with Italy in 1918. The armistice of Villa Giusti had been signed in November 1918, a day later Italian troops occupied Tyrol capturing more than 300,000 of soldiers without any problem at all.

Like in the First World War, during the Second World War Italy initially remained neutral. In June, 1940 the country declared war against Britain and France when it was clear that France could be easily defeated. In the early times of the war, Hitler consented that Italy remain out of the war; however this changed later.

Mussolini believed that Britain would also be easily defeated and would ask Italy for mercy, but this proved to be completely wrong. Britain had originally been attacked only so Italy would get a seat on the peace table later, the performance of Italian army was quite disappointing for both Hitler and Mussolini. Italy constantly needed German help and only the Italian naval forces could be considered successful.

Some pictures of Italy at the beginning of the 20th Century

As Janeine Starek has written, I, too, am writing a book (novel), fiction and non-fiction. Just love lingering with the photographs here. What were their lives, their feelings and hopes? Could they have imagined even tomorrow, and radio, the Argonne, Mussolini?

I am writing a book as well, although nothing regarding marble. My book will be an assortment of non-fiction and fiction prose. The sites I have stumbled onto here are pretty remarkable. I love looking at the photos. Maybe someday I’ll travel there, get a better look. It would be nice to be able to photograph some live pics to insert.

I visited several web sites except the audio quality for audio songs present at this site is really fabulous.|

Very helpful. I’m writing a book about the marble workers of Carrara. What were Italians driving during the 1920s?