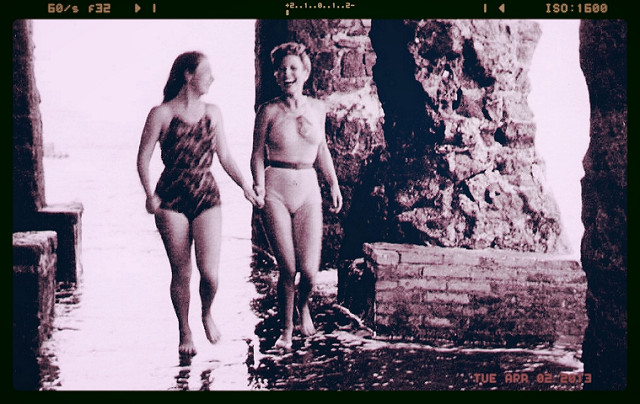 How was Italy during World War II?

As many other people in Italy and around the world, I was brought up by my grandparents. They were all born between 1913 and 1918, they lived – and fought – the Second World War on their skin. Different memories of it, they had, because different for them was what fate reserved in those years. Regardless of how much – and how – the war touched their lives, it changed it forever and in such a way even I, born in 1978, bring within the emotional signs of what they experienced.

I also carry in my mind their memories of the war, though. Memories that were, to me as a child, curious, fascinating: stories of bombs deflagrating during the night and escapes towards shelters. Stories of life in the countryside, many families in a single farm, to keep safer from Allied bombings. Stories of young women alone with their children, missing their men, sent to the front. Stories of youth, of laughter, of gentle German soldiers and not so gentle partisans. Stories of love and loss.

There would be a lot to say, about the lives of my grandparents during the years of the Second World War, enough words to fill the pages of a book. There’s not enough space here. Yet, their stories, along with readings and books, will give an idea of how life was, in Italy, during those faithful and tragic years.

Life in Italy during World War II  didn’t differ much from that of other civilians around Europe: it was characterized by restrictions. Living under a dictatorship, such restrictions didn’t simply take the form of limited amounts of non-National goods, fuel and even items of clothing, but also of censorship. Freedom of speech had been severely cut since the very inception of the Fascist Régime, which largely controlled through the Ministry of Propaganda (much as it had been happening in Nazi Germany) what Italians could say, write and know about the war and politics.

The letters written by soldiers from the front to their families, for instance, were always inspected by censorship officers, who would blank out in black ink anything deemed non constructive for the Régime or that could affect public opinion negatively. The only correspondence free from censorship limitations was that entertained by members of the army.

The Fascist propaganda machine worked throughout all sectors of society and embraced all ages. Since the 20s, children were enrolled in Régime’s youth associations. Boys and girls between 6 and 8 were part of the Figli della Lupa (the she-wolf children). From the age of 8 to that of 14, boys became Balilla and girls Piccole Italiane (little Italians); from that of 14 to 18 boys became Avanguardisti and girls Giovani Italiane (young Italians). At this stage, young women were considered ready to tackle their duties as wives and mothers (Fascism, like Nazism, had a very traditional view of womanhood), whereas boys enrolled in the Fasci Giovanili di Combattimento until the age of 22, when they were considered ready to take up their role as defenders of the fatherland and become soldiers.

When Italy invaded Ethiopia in 1935, the League of Nations immediately enforced an embargo against the country, which surely affected it, but not as much as the League probably had hoped, at least at the beginning. Germany, already politically very closed to the Fascists at the time, was not part of it, thus allowing Mussolini to maintain proficuous commercial relations.

In a way, the embargo strengthened Mussolini’s desire to make of Italy an autarchic country, that is, able to sustain itself and its economy only with products and produce coming from within its borders and from its colonies. Coffee for instance was largely substituted with chicory and tea with hibiscus flowers coming from the African colonial lands: we called it “carcadé” and it’s still a relatively popular drink in Italy, especially during the hottest months.

By the beginning of the war, in June 1940, however, the country struggled. Further restrictions were implemented, with heavy rationing of specific foods such as meats, butter and cereals. Soldiers at the front were usually given larger rations of restricted foods than civilians, and even obtained things not available to people at home outside of the black market. My grandfather, who fought on the Russian front where he found his death at the age of 29, used to send back home to grandma, alone with two children, his own coffee and chocolate, as it can be gathered by the content of some of his beautiful letters.

My maternal grandparents spent most of the war in the farm where my grandfather’s family worked as sharecroppers, and never really had problems with food: grandma used to tell – with a hint of pride, I remember – they never had to eat brown bread, as they could make their own white flour. Mind, World War Two’s brown bread had nothing to do with what we know today: it was largely made with chaff and, at times, made bulkier with sawdust. All rationed foodstuff, including bread, was given out by the State, each family allowed a specific amount. Its quality, as you may imagine, was extremely low and plenty of people tried to get better food on the black market.

Truth is that things, from this point of view, were slightly simpler for those living in smaller, country villages or in the countryside than it was for city dwellers: fruits, vegetables, cereals and meat were more easily available and were often simply exchanged among families rather than bought. Of course, this didn’t mean life was easier, but simply not as bleak.

In an attempt to help people in cities, the Régime implemented orti di guerra, war’s orchards, destining large sections of city parks and many a sport field to the cultivation of vegetables and cereals. In spite of it, people in large urban conglomerations endured extreme hardships. The grandmother of our director, Paolo Nascimbeni, used to recollect how, during the Nazi presence in Rome, she would work as a cook for the German contingent; the food available for the occupiers (we’re talking about the months after the 8th of September 1943) was plentiful and included much sought after items like meat and poultry. When she had the opportunity, she would hide a steak in the rubbish, only to pick it up before going home, where she could cook it for her family.  Like Paolo’s grandma, many women and men of those years used all types of stratagems to feed their children and loved ones.

Italians during the war didn’t only have to make huge sacrifices in the kitchen: metals were needed to support the country’s war effort and citizens were asked to contribute by surrendering great amounts of items made in iron, including gates and fences, as well as copper and tin, metals largely used to produce kitchenware and farm instruments.

The Products of Autarchy

Italy during World War II was characterized by  autarchy, or autarchia as we say in Italian, which was an important part of Italy’s life and economy both before and during the war years. Through autarchy, Mussolini believed, Italy would not only have freed itself from economic dependence from other countries, but would have also gained back pride in itself and its achievements. The sanctions imposed by the League of Nations first and the war effort after, didn’t only mean the country could no longer import goods from abroad, but also severed its export ties with most of the world. This meant that, if on one side there was an evident need to substititute goods once imported with local ones, there was also a surplus of all those things Italy used to export. The two issues were solved by using plenty of the latter to produce the former.

Italy couldn’t export its cheeses, so it used the milk in excess for its caseine, from which a fibre called lanital was created. Lanital was similar to wool in texture and it helped keeping warm during the winter months. Cafioc was a cotton-like fibre obtained from hemp. Wine was used to produce alcohol and turned into a relatively efficient type of fuel. Wood coal was chosen instead of coal; as said, hibiscus flowers were brewed instead of tea and chicory instead of coffee. Rabbit was no longer solely used in the kitchen, but its fur became essential in the clothing industry.

Symbol of the autarchic industry of Italy before and during the Second World War was orbace. Made with wool fibers treated in a particular way, orbace was strong and waterproof and for these reasons chosen to make uniforms for the Milizia Volontaria and the Camicie Nere.

Italy under the bombs

Since the beginning of the war Italy, as other European countries, was victim of numerous airborne attacks. It wasn’t only cities to be in danger, but also specific locations of strategic relevance in the countryside, often see of important logistic joints. Shelters were identified or built in cities and villages to guarantee some some sort of safety to civilians, but many simply left urban conglomerations and sought refuge in the country, thinking to be safer there. The anti-bomb alarms rang at any time of day or night, creating a continuous sense of fear and instability in most. Electricity was rationed, which meant that nightime was often a candle-lit affair for many. Fear of nightime bombings got people into the habit of covering up their windows, so that not even the flicker of a small flame could be seen from Allied airforces.

Italy during World War II and people’s lust for Life

Those of us who had the extreme fortune of growing up with the people who lived the war, however, know the magnitude of it failed to break them.

Throughout the many, many tales of war, my grandparents gave me, a sense of love of life and desire to enjoy it always shined through. Even my paternal grandmother, who lost her husband and was left a window at 24 with two young children to raise on her own, had fond moments of remembrance of her youth, at least until my grandad was around. Even if he was a soldier and spent very little time at home, she smiled at the thought of the beauty of their love, in spite of the tragedy and bleakness of their surroundings. My maternal grandparents were the same: youth, camaraderie, sense of belonging and an immense eagerness to live a happy life in spite of it all, always transpired from their memories.

This generation, the generation that lived and fought the war, experienced on their own skin what the death of human nature truly means. They saw it, and it marked them for life. Yet, many of them, instead of  mourning for what can only be defined as a global loss of faith in man’s nature, rose from tragedy with a true lust for life and and for happiness, to be found in all things, even the smaller.

This is why I believe my grandparents taught me much more than tying my shoes and holding a spoon in my hand. They taught me the importance of finding happiness in everything, in spite of everything.