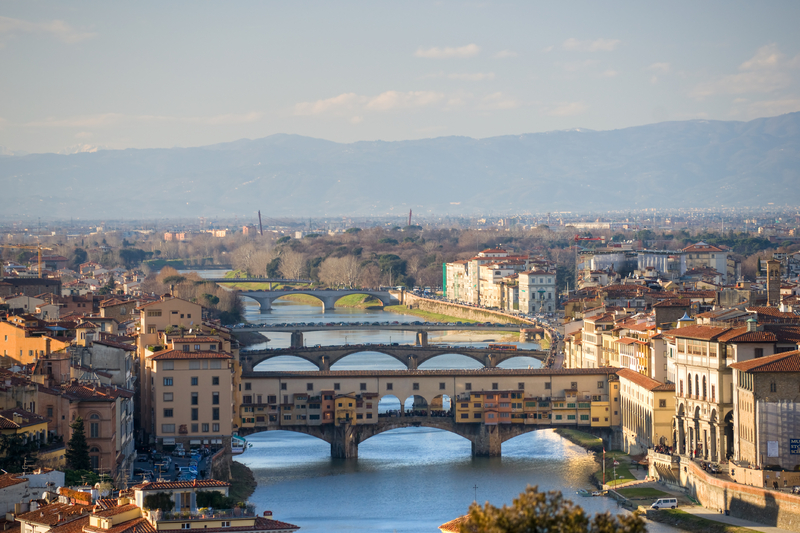 The Renaissance or rebirth began in Italy at the end of the fourteenth century and became an era of many cultural and architectural achievements in Europe. The Renaissance first began in Tuscany and was centered on the republics of Siena and Florence after the decimation left in the wake of the Black Death. The end of the Renaissance period marked the transition of the continent from medieval to the early modern era in Europe. The term Renaissance itself is quite modern, since it began to be used by historians only in the 19th century.

Later, it also had a great impact on the Republic of Venice and would also spread towards Rome. It was in the Eternal City where various structures from Ancient Rome were rebuilt by the popes in the 16th century.

The peak of the Renaissance occurred towards the end of the 15th century, a time when numerous foreign invasions began in Italy. This was the beginning of the famous Italian Wars, which saw Renaissance advancements in science be applied to warfare. It was also during this time, the beginning of the 15th century, that elements of the Italian Renaissance spread to the other countries in Europe which led to a European-wide rediscovery of art and science.

Culture of the Renaissance

Though the origins of the movement had been confined mainly to the intellectual and cultural endeavors of the 14th century, many aspects of the society and culture of Italy remained medieval. These improvements were quite concentrated among the elite of the country, life for the majority of Italians remained unchanged since the middle ages.

However things did begin to change for the better, as Italian city life would flourish. The centuries of the Renaissance saw the major Italian cities turn from dark medieval cities of wood into bright cities of marble. Dwellings began to be designed differently as life in the city emerged from the courtyards and into the streets and public squares.

Weddings in Renaissance Italy took the customs of Medieval Italy to another level as even the poorest families attempted to emulate the rich. Even a peasant maid would need to provide a hefty dowry to catch entice another family to offer their son. Modern concepts of marriage as an act of love were just beginning and weddings of the time were more a social contract between two families. However they still were a time of joyous celebration and guests often expected to be well fed and entertained. Before the Council of Trent, weddings were presided over by a magistrate and not a priest, according to Roman-based civil law.

Women in the Renaissance began to take a greater role in social life, although their role of caretaker of the house and children remained unchanged. The reason for marriage was still to produce sons, and wives expected to raise young boys into healthy and educated young men. Daughters were expensive to raise, due to the need to provide a dowry, which could bankrupt lower class families. However unlike the Middle Ages, Italian women of the Renaissance had much more freedom of movement, were expected to have a will of their own and be able to form an opinion. Although they could not wield power directly, powerful women of the Renaissance were often the so-called ‘power behind the throne’.

The cuisine and eating habits of the Italian Renaissance were the beginnings of many of our modern concepts of food. The lavish banquets and the elaborate dishes of the time still had more to do with the Middle Ages, where wealthy diners often ate in pairs, sharing utensils and throwing discards onto the floor for the dogs. Food changed very little for the lower classes in Renaissance, which still relied on course dark bread, beans, pasta or buckwheat polenta.

Meanwhile the wealthy Italians of the Renaissance, especially the Medici family, would begin to break away from the eating traditions of old and create what arguably is the basis for modern gourmet cuisine. They began to incorporate new world ingredients like potatoes and peppers and they were they would also introduce a new utensil to the table, called the fork. Forks were first seen in Italy during a visit by a Byzantine princess to Venice and were originally frowned upon by the church. The rich also began to eat their meals upon plates of wood, metal and later fine porcelain instead of hard bread (a trencher) like the poor. Naturally, the elite had access to finer ingredients and exotic spices to make their meals, but the people of Italy during the Renaissance ate many of the same foods, including pasta and polenta.

The Renaissance was a golden age of pomp and celebration as the wealthy attempted to outdo each other in public displays. The reasons were varied, religious or secular celebrations were held with equal enthusiasm as if the Renaissance was trying to forget the often dour times of Medieval Italy. These events also were times when the rich and poor mixed rather freely, processions could include every social strata from Pope to beggar.

As the time of knights on the battlefield ended with pike and gunpowder, their skills with a lance became increasingly popular as a sport. Jousting was very popular as a spectator sport throughout Renaissance Italy and numerous other public games, horse races and even bullfights brought people into the large public squares of Italian cities.

Achievements in the Renaissance

The Renaissance era in Italy is mainly famous because of the various achievements in art and culture. Many famous poets had belonged to this era like Ludovico Ariosto, Poliziano, Marsilio Ficino, Matteo Maria Boriardo and Luigi Pulci. Italian writers and poets had made several contributions to the world of literature during this period.

The idea that the Renaissance was a rebirth or rediscovery is best exemplified by how its greatest artists used the works of ancient Greece and Rome as their base. In the fine arts of the time, the masterpieces of stone, bronze and paint remain some of the greatest of human achievements. Names like Leonardo, Michelangelo, Raphael, Donatello, and Botticelli are household names centuries after their deaths. Our modern concepts of artistic beauty are in many ways still defined by the achievements of this era. They took much from the ancients the art of the Renaissance also was heavily influenced by the Catholic Church, creating something unique to that particular place and time.

Although the Italian Renaissance still had much in common with earlier times in Europe, it also began much that we still find in our modern world. So many achievements of the Renaissance have since been surpassed and yet others remain untouchable. Michelangelo’s David and Leonardo’s Mona Lisa are perhaps admired even more today than when they were created, centuries ago.