Almost raptured by the crystal-like beauty of its sea, we often forget Sardinia is also a land of history and tradition in need to be discovered. Sea, sand and the glitzy life of VIPs holidaying in Porto Cervo are certainly an attraction to many, but while there, it is worth to take a look back to the millennial heritage of Sardinian people,  listen to their unique language and find out more about all that concerns their valuable past.

Nuraghi are one of the island’s best known, yet more mysterious symbols. Ancient and majestic, they are vestiges of a long gone civilization, about which historians and archaeologist would love to know more. Follow us through the sunny paths leading to Sardinia’s own iconic stone giants.

We have to take a long step back into time to meet the creators of Nuraghi: historians agree in placing the Nuragic civilization between 1800 and 238 AC. They were inhabiting the island while King Tut ruled over Egypt and Ramses II fought its most gruesome battles; they were there while the Greeks created democracy and Sparta showed to the known world the beauty and strength of its army. They were there when Rome was founded. So much history, these people experienced throughout their lives, probably without even knowing it.

Yet, they were to make history themselves, even though in a more limited -at least geographically – manner.

The Nuragic civilization appears on history’s radars sometimes during the Middle Bronze Age and takes its name, of course, from the structure that most represented them, the nuraghe. There are about 7000 constructions in Sardinia attributed to the genius and architectural know-how of these people, many of them nuraghi; it is clear that building was their thing.

Archaeological data allow us to confirm the Nuragic civilization thrived on an economy based on agriculture and farming, even though metal extraction, lead and copper especially, was practiced widely.

Socially, we are talking about a strictly structured entity, organized following well defined hierarchical rules. At its apex, warriors, but also those involved in religious practices such as the cult of water, typical of their spirituality.

Nuragic people were known in the Mediterranean: they entertained relevant commercial relationships throughout their millennial history with several other civilizations, but their prosperity was to end because of conflicts with the Carthaginians and the Romans.

It is in this cultural and commercial context that the nuraghi were created and built. Their typical architectural style is called cyclopic: it used roughly cut polygonal stones, superimposed one over the other. Within some nuraghi archaeologists found traces of mud and mortar, very likely used to secure the stones together and give stability to the structure. Another architectural technique used for the construction of nuraghi was called isodomic, which was typical of the late Bronze Age, but also of Classical architecture. It was characterized by the use of regularly cut stones assembled in regular lines to create structures.
But what were they and are they the only vestige the Nuragic civilization left us?

Nuraghe: what does it mean?

The word nuraghe originates from the pre-indoeuropean word nur. Literally, it means “hollow pile of stones.” Memories of this ancient term are also to be found in the Sardinian term “nurra,” which means exactly that, a pile of stones. Many toponyms on the island can be associated with the word nur: a whole region near Alghero is called “Nurra,” and there are also the villages of Nurri, Nuraminis and Nurachi.

An ancient word that truly left a mark in Sardinian culture.

Nuraghi were not the only architectural structure left by this civilization: villages, wells -very likely at the centre of worship – and tombs that go by the amazing name of Tombs of the Giants are still visible today on the island.

Among them all, however, they remain the most eye-catching and somewhat mysterious. Most historians agree they were probably military constructions, fortresses built to protect the areas surrounding them. Supporters of the theory underlined how their shape and structure closely resemble that of later medieval tower houses, the quintessential strongholds.

However, this hypothesis has been criticised. Some archaeologists have argued that the internal areas of the nuraghi are too small to be apt to the necessities of a building whose aim is that of, potentially, resist to months of attacks: where was the food to go? And what about weapons? And the warriors?

According to part of the specialists involved, there are other reasons why nuraghi did not have a military use. These buildings are majestic, huge and, well, many. They are present all over the island and, if protection were their duty, we should deduct the Nuragic civilization had lived most of its long history at war. There are about 7000 nuraghi on the islands, an immense number for a relatively small territory and to justify such a number of fortresses we should admit the Nuragic people spent their time fighting. Not impossible, you may say, but it all gets more complicated – or simple, depending on how you look at it. There are no archaeological findings to support the idea the Nuragic civilization was so militarized, a possible sign that, indeed, nuraghi were not meant to be fortresses at all.

An alternative to this theory wants the nuraghi to be religious structures: nuraghi became the symbol, to the eye of their constructors, of Man taking over the territory surrounding him. They were, in other words, symbol of a victorious battle, so to speak, that fought to dominate nature.

There is more in relation to this “spiritual” view of the nuraghi: they have been considered by some as the instrument to put in contact the skies and the earth, a means of reflection of the above dimension on the ground.

Very interesting theories, indeed, but how rooted in history are they? We don’t know.

Some experts do underline the possibility that nuraghi had multiple uses, an hypothesis that may well be closer to the truth than anything else.

However, there is still place for speculation. 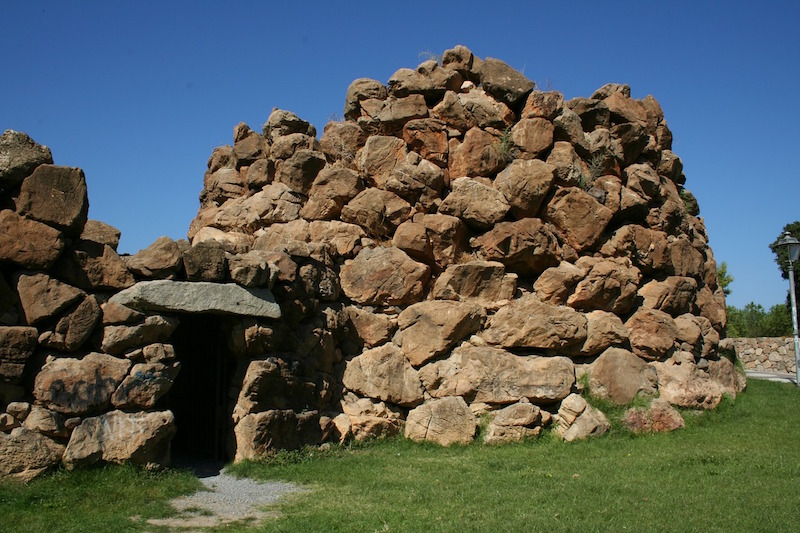 In December 1997, Sardinia’s Nuraghi became part of the UNESCO World Heritage because “they represent a masterpiece of Man creative genius; they are a unique and exceptional vestige of a cultural tradition and a civilization no longer extant; they represent an example of an extraordinary form or architecture.” UNESCO chose the Nuraxi of Barumini as a unifying symbol of all nuragic structures in Sardinia.

The most beautiful Nuraghi

Needless to say, if you are into history and archaeology any of the 7000 nuragic constructions still extant in Sardinia would do. Yet, there are some that amaze more than the others for their state of preservation or simply for their imponence.

This is the most famous Nuraghe in the world and it is also known as the Nuraghe of Barumini. You can find it not far from Cagliari, on the way to Oristano.

The largest Nuraghe in Sardinia, it is located not far from Orroli, in the small hamlet of Pranu e Muru. Its name, “arrubbiu” derives from the type of lichens growing on its stones, which give it a particular reddish color.

Located in the Cabu Abbas valley, near Torralba (Sassari). It was probably built around the 10th or 9th century BC. It is surrounded by the remains of a small nuragic village.

It takes its name from the small hamlet it belongs to, in the commune of Abbasanta, in the Oristano province. This is a peculiar nuraghe: it is triangular. A curiosity about its name: “losa” means graveyard or gravestone in Sardinian: the nuraghe is called so because archaeologists unhearted numerous human bones while excavating it.

The Nuragic village of Tiscali

You will find this beautiful nuragic village near the Supramonte of Dorgali, between the Flumeddu and Lanaitto valleys. The Nuraghe is surrounded by forty huts, probably built in Roman times.