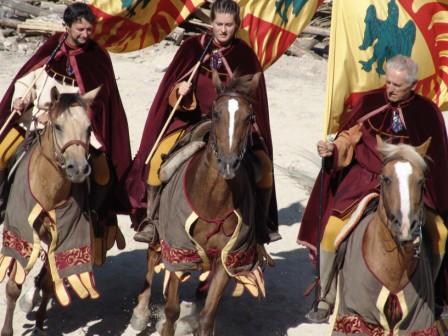 …quite a long name for a young association!

It all started in September 2004, when a group of people gathered and decided to re-enact the deeds of the great army captains of the 15th century, providing a real show that is nevertheless faithful to history.

Our association includes four guilds: musicians (with drums and clarions), flag-wavers, horsemen and the guild of the arts.

We bear on our mantles the coats of arms of the Montedoglio family, who were the founders of Pieve S. Stefano in the 12th century and fought for a long time to preserve freedom and peace over our land.

With the colorful performances of our musicians, flag-wavers and horsemen, we bring local history and traditions into the present all over Italy. We also organize historic shows and events, inviting tourists to visit hidden but charming ancient sites of our territory, and bringing them back to the atmosphere of the 15th century.

Our main event is held every year on the first weekend of July and is called “Mignano 1499… quasi 1500!”, along the lines of a well-known Italian comedy starring Roberto Benigni and Massimo Troisi as casual time travelers who get stuck in a small Tuscan village in 1499.

In fact, the events that stimulated us to organize this historic re-enactment in the little hamlet of Mignano are not just a script… it’s all true and reported in old documents! The castle of Mignano, owned by the Counts of Montedoglio (who were faithful allied to Florence) was actually the background of an important battle.

Venice had indeed occupied the castle of Mignano and the main roads to Florence across the Apennines in an attempt to surround and isolate the Tuscan town, and eventually lay a siege to it. But the Venetians had underestimated the valiance and courage of Captain Cecco from Montedoglio, who gathered his horsemen and rescued the castle of Mignano, bringing it back under the protectorate of the Republic of Florence.

“Mignano 1499… quasi 1500!” is an event to recall this deciding battle, but it also offers visitors an alluring and rich program that mixes duels and tournaments with period entertainment and good food prepared following Renaissance recipes.

The program opens with the Friday night banquet that is held in the unique torch-lit atmosphere of the small castle’s yard in a perfect and strongly evocative Renaissance style, with dances and acting.

Then, the following day visitors are offered the first glimpses of the military action that is going to take place in the next hours… Cecco da Montedoglio’s men (the Knights of Matilde) are approaching Mignano and you can see them from the castle’s gate galloping their horses. Florence’s crossbowmen and men-at-arms are pitching their camps in the nearby fields and are preparing their weapons ready for the battle.

Finally, on the third day, soldiers and horsemen are all gazing at the sky, waiting for the falconer’s signal to attack the Venetians… then a hawk dives from the castle’s tower and the battle starts!

Anyway, while waiting for the battle there’s plenty to see and to do in Mignano! You can watch 15th century craftsmen and artists working in their shops, you can visit the military camps and try bows and crossbows, you can observe fascinating hunting scenes with falconers and their beautiful birds of prey. If you’re hungry, the castle’s inns will serve you delicious foods and drinks selected from ancient recipes, and you will be enthralled by the exciting performances of our musicians and flag-wavers to celebrate the victory of Florence over Venice.

So if you fancy to take a time trip in the life and customs of a small Tuscan hamlet at the beginning of the 15th century, just come and visit us in July!