The year 753 BC marked the beginning of Rome, which would dominate the western world for centuries: politically until the fall of its western Empire in 476 AD, culturally and artistically, under many points of view, still influencing western culture today.

The traditional story states that Rome was founded by the brothers Romulus and Remus, who were the sons of Rhea Silvia and Mars, the god of war. The two children were sentenced to death, but were instead snuck away by a servant.  After being nursed by a wolf (la lupa, the she-wolf, still symbol of Rome today) they were taken in by a shepherd.

Eventually they funded a village on the Palatine Hill, a hill which would eventually house the palaces of Roman Emperors such as Augustus and Tiberius. Scornful of the walls in the city, Remus met his death by Romulus who then proclaimed himself king of his new city of Rome. He invited peoples of all walks of life into his new city, ranging from ordinary folk to criminals running from the law.

The Kingdom of Rome saw the reign of seven kings which lasted from 753 BC until 510 BC, when Tarquin II was ousted from power, thus establishing the Roman Republic in its place. The Roman Republic was ruled by the senate, a body of elected officials empowered with the wishes of the people. The senate had many laws enacted to prevent anyone from acquiring too much power. Governing the senate were two elected officials called Consuls who acted as the perpetual leaders of the Roman world. The Republic of Rome enacted many checks and balances to keep power from swaying out of control and into the wrong hands. In times of crisis, a dictator could be appointed for a six month period, but would then have to give up their power.

The Republican Army, or legions, had three bodies of soldiers positioned in lines against the enemy. The new recruits were called the Hastati and they were placed on the front line. Principes, the second line, were comprised of soldiers in their prime physical condition whereas the last line, the Triarii, were veterans of battle that would fight as a reserve. All soldiers were forced to purchase their own armor and the quality of their armor would also determine where they would end up in the Legion. 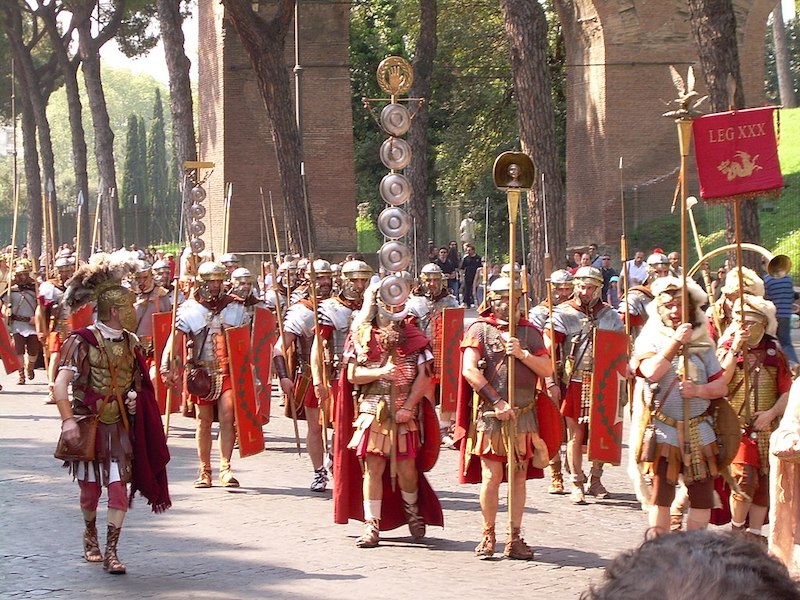 During the timeframe of the Roman Republic, the dominance of Rome was to grow to heights not even the founders could have imagined. Rome received a real taste of battle in 280 BC when Pyrrhus of Epirus, King of Epirus which was a part of Greece, set out to invade the Italian Peninsula. Although Pyrrhus defeated the army Rome sent out, his army too suffered great casualties as well and for an invading army, this was detrimental to his campaign. Eventually he was defeated in 275 BC, thus demonstrating the power of Rome to all those along the Mediterranean.

Rome was then engaged in the Punic Wars against Carthage, another powerful nation in the Mediterranean. It was during the second Punic War, which lasted from 218 BC until 202 BC that the great Hannibal Barca, a Carthaginian general, marched over the Alps to deliver three major defeats to the Romans; one at the river Trebia, another at Lake Trasimeno and lastly his crushing victory against the Romans at Cannae. He was eventually defeated at the Battle of Zama by Scipio Africanus in 202 BC. Carthage was reduced to being a vassal state of Rome and it was finally completely assimilated as a part of Rome after the third Punic War which ended in 146 BC.

Trouble in Rome was brewing, however, as power created great corruption within the élite. The homeless rate in Rome was staggering, and two brothers, Tiberius and Gaius Gracchus, sought to put an end to it. Although they were killed as a result, they paved the way for Gaius Marius, the man who started to get the wheels really turning for forging an Empire. Marius is especially credited with creating the Imperial Legion, which turned the Roman Army into a professional army. These men were to be the ones that would pave the way for the famous Roman statesman and general, Gaius Julius Caesar.

Julius Caesar was a man who knew how to use all that was around him to his advantage, and took many risks in doing so. He formed the first triumvirate with two other Roman statesmen at the time; Marcus Crassus, the man who would put an end to the rebellion of Spartacus, and Gnaeus Pompey. Caesar was given command of legions, and proceeded to conquer all of Gaul before turning back to Rome. Fearing Caesar would declare himself king, the Senate attempted to force Caesar to give up his legions to which Caesar refused, also fearing his own fate if he went into Rome without the legions. Thus Caesar crossed the river Rubicon and sparked civil war. Caesar defeated Pompey at Pharsalus, but was later murdered on March 15, 44 BC by a conspiracy of senators lead by Marcus Brutus and Gaius Cassius who were fearful of his enormous power.

The state eventually fell into the hands of Caesar’s grand-nephew and adopted son, Octavius. After defeating Marcus Antonius at the Battle of Actium, the rule of Rome eventually fell into Octavius’ hands. The senate bestowed upon him the title of Augustus, a name meaning “majestic” and symbolizing his great authority. Under Augustus, peace was restored to a Rome that was wrought by civil strife and paved the way for the Roman Empire.

The right of the emperors following Augustus was marked by corruption, with certain episodes of peace. The Empire was almost constantly at war with the Germanic tribes across the Rhine as well as the people of Parthia, located in the Middle East. The Empire saw great Emperors such as Vespasian, Trajan, Marcus Aurelius and Hadrian; yet it also saw Emperors who could be classified as insane, such as the mad emperor Caligula (more about Caligula by clicking on the link).

The Praetorian Guard, an élite band of soldiers charged with the task of protecting the emperor, established by Augustus, would eventually become a dominant force into Roman politics, effectively controlling the entire empire from behind the scenes until its dissolution by Constantine in the fourth century AD.

Upon the death of Marcus Aurelius in 180 AD, the Empire fell into a void from which it would not recover. The emperors that followed would become increasingly corrupt by draining the treasury, while the quality of Roman life declined. The Empire eventually was split into the Eastern Roman Empire and the Western Roman Empire so as to more effectively administer the state. Eventually, Emperor Constantine ascended to power, uniting the Empire under his rule and proclaiming Christianity as the major religion. Upon his death, Rome continued to experience increased turmoil on the outside and on the inside. Facing invasions from almost all sides, the Empire’s days were numbered and with the swift invasion of Attila the Hun and the steady decline of the state, Rome would not last much longer. In 476 AD, the Emperor Romulus Augustus was ousted from power by Odoacer, a Germanic chieftain who opted not to appoint an Emperor of Western Rome which effectively marks the end of Rome.