What’s the correct use of the pronoun you in Italian? A little story to introduce the matter: today, I was walking my mother’s dog in Rome’s Villa Sciarra, when a young lady in her early 30s started speaking with me using the tu. Theoretically, I should have been offended, but in reality I was quite pleased: it made me feel young — and who doesn’t want to feel young?

I left Italy 32 years ago, when everybody used the tu (second person singular) when talking with me but now, since I am unfortunately much older, most people use the third person singular Lei (showing respect for my age).

There are exceptions, however: I ride motorcycles and somehow, when I am on mine,  people use the tu: maybe bikes make you look younger.

Manners and linguistic register tell us we are supposed to use Lei as a form of respect towards a person we are subordinate to (a student with a teacher, for instance), who is older than us or that we don’t know. But how  does it actually work in reality?

What’s the story with tu, lei and voi?

The little story above shows that there is a difference in the use of pronouns if we compare English and Italian. If English recurs to a neutral use of  the pronoun “you,” which is chosen for both the second person singular and plural, Italian requires different pronouns, depending on the addressee.

The single word “you” has two main translations in Italian: tu and voi. However, there is a third option used in a formal context to mark the distance between the speaker and the listener, Lei.

Correct use of the  pronoun “you” in Italian:   tu

The pronoun tu is used in Italian when addressing a person we consider our peer. Here are some specific cases when its use is common:

–  when there is not a sharp difference in the age of the people taking part in the conversation;

–  when people speaking have an informal relationship or they are friends;

–  when we are in an informal context and we do not wish to mark any type of distance.

Correct use of the pronoun “you” in Italian: lei

The Lei is Italian’s courtesy expression, or formula di cortesia, as we say. It is used in very specific situations, such as:

– when speakers have different social roles because of their age, for example if a child speaks to an adult;

While the use of Lei remains necessary, it must be noted that it also became looser in recent years, due to the increasing informal nature of professional relationships brought about by the use of email and social media communication.

Correct use of the pronoun “you”in Italian: voi

And what about voi?

The pronoun voi is used as the plural of tu, as it is the second person plural in Italian and it is used when we wish to address more than one person. Its use, in this context, is pretty straight forward.

Some of you, however, especially those who grew up with Italian grandparents, or have relatives from certain areas of Italy — like the South — may be familiar also with voi used in a courtesy context instead of Lei. So, what’s the story here?

The voi had  been used as a courtesy form since the 14th  century, but already in the 18th century lei was taking over. At the time of Mussolini, however, using lei in a formal context was prohibited, because perceived as a foreign influence on our language.

After the end of the war, the formal use of voi sort of died out. It is somehow still common in the South of Italy, but not as much as it used to. When it comes to high register language, only the Lei form is taught in schools nowadays, so most Italian kids, from both North and  South, just don’t know about the voi anymore. In fact, according to modern Italian grammar, the use of voi is no longer accepted and is considered a dialectal modification of correct Italian. 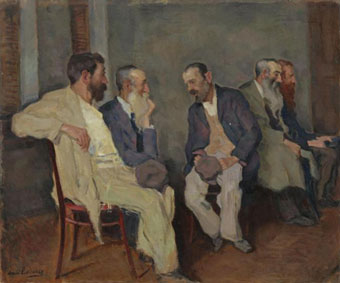 Basically, remember that Lei is the only courtesy form used in contemporary Italian, so just avoid the voi: you’re going to make your life much simpler — and it sounds very antiquated anyway. If you want my two cents, I try to use the second person singular each time I can: I envy the English language for that.