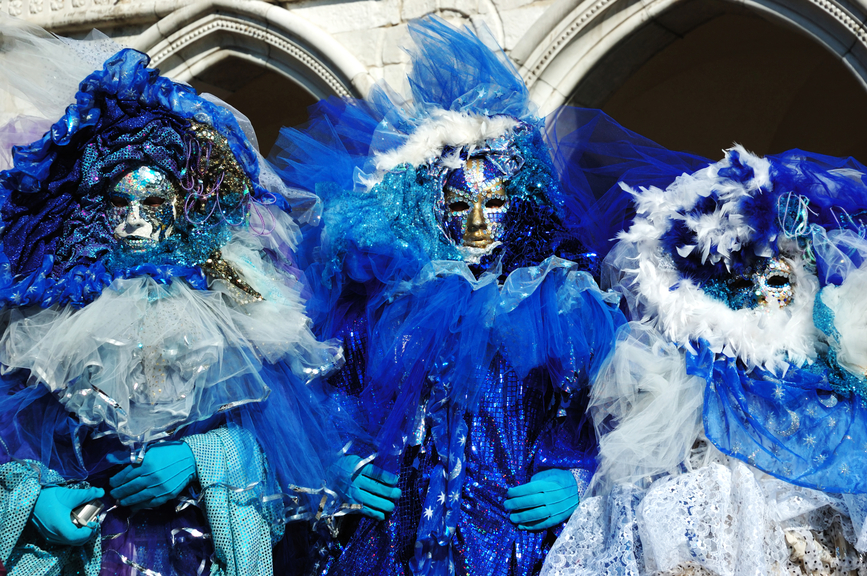 Because there is more to Carnevale than Venezia and Viareggio

Carnevale is one of the most colorful celebrations in the world. In Italy, we are serious about it. In the end, this is where it was born.

We are all familiar with the Carnevale of Venice and that of Viareggio, as well as famous international renditions such as the Carnival in New Orleans, that in Rio and that in Notting Hill (London).  In Italy, though, every town, even the smallest, has its own Carnevale parade. Every village celebrates, every family cooks up a storm to honor this century long tradition of dancing, masquerading and feasting before the fasting and meditating of Lent.

We have already written about Carnevale‘s food, best known masks and its vocabulary, where our most famous Carnevali, such as that of Venezia and Viareggio, have been described within the wider topic of Italian best known international events.

But what about Carnevale’s origins and historical tradition? What about the genesis of its name and the beauty of its many parades other than Venezia and Viareggio? Read on and find out with us something more about one of Italy’s best loved – and ancient– traditions.

The origins of Carnevale

The etymology itself of the word Carnevale has been object of fiery discussions. To some linguists, the word comes from the Latin expression carrum navalis, a type of float shaped like a ship used by the Romans when celebrating the Saturnalia, and in the early centuries of Christian Carnevale. Even though this theory is phonetically acceptable, many disagree with it, as it is not historically supported. The theory considered more realistic by the majority of experts sees the term Carnevale originating from another Latin expression, carnem levare, meaning “taking away meat,” which throughout the centuries became carne, vale! (Goodbye, meat!). This expression was associated with Ashes Wednesday, which was the day when Lent began and, therefore, people stopped eating meat.

If defyning Carnevale linguistically seems relatively straight forward, pinpointing its historical origins may not be as simple.

Carnevale is the inheritance of pagan practices from ancient Greece and Rome. Celebrations in honor of the god Bacchus in Greece (the Baccanals) and Saturn (the Saturnalia) in Rome are both counted among Carnevale‘s ancient relatives. In truth, we could trace Carnevale‘s origins even earlier, to the very dawn of history: some believe in the existence of primitive celebrations in honor of the coming of Spring, where partecipants would paint their faces and bodies and give in to ritualistic dancing and chanting. We are talking about a time much, much earlier than the coming of Christ and any civilization as we know it, around 12 thousand years ago. Closer to us in time, but always before the birth of Christ, even the Egyptians enjoyed celebrations similar to our Carnevale, centred on freedom of expression and joviality, held in honor of Isis.

As seen, the Greeks and the Romans kept these ancient rituals alive through their own celebrations and festivals honoring fertility and nature’s rebirth. Once Christianity took over Romanity from a spiritual point of view, acceptance of such type of ritualistic excesses was difficult; at the same time, these were extremely popular festivals, known and spread through the largest Empire Western Mankind had ever had, and getting rid of them was out the question.

With the diplomatic afflatus and the cunning of always, religious officials decided to transform the pagan in Christian, much as it happened with Christmas, whose date came to coincide with pagan celebrations of the Winter solstice. Ceremonies in honor of fertility and Spring were fitted around the Christian liturgical calendar and became, due to the time of the year they regularly fell on, a moment of merry enjoyment before the beginning of Lent, traditionally asssociated with penitence.

All in all, Carnevale is a period of transition: from the point of view of the pagans, it celebrated the transition between the end of Winter and the beginning of Spring, the rebirth of nature. For the Christians, it represented (and still represents) one last moment of indulgence before the penitence of Lent, which brings to the celebrations of Easter. In a way, both pagan and Christian celebrations are symbol of new beginning and of a new birth: that of nature in the Spring, and that of the Soul in Christ.

Because early Carnevale followed the time setting of pagan Saturnalia, it was celebrated straight after Christmas and included New Year’s Eve and the Epiphany; people already enjoyed dressing up and playing tricks then, habits that were to become synonym with Carnevale itself more than anything else. Story wants that, when still under Roman dominion, yet already Christian from a spiritual point of view, the Gauls took Carnevale‘s celebrations so seriously its excesses were prohibited from Rome. And Rome was one of the first places where Carnevale took the shape we know today: since the centuries of Late Antiquity, when an Emperor was still the ruler of the caput mundi, Carnevale was the time of horse races, floats, egg throwing and tricks pulling, very much as it is, still, today.

Carnevale in the Renaissance

Costumes and masks became a fixture of Carnevale during the early Renaissance. The masquerade ball was introduced by pope Paul II in the 15th century and gained approval especially thanks to the popularity of the characters of the Commedia dell’Arte, who are at the origin of many of the most popular Italian maschere di Carnevale. The Commedia dell’Arte, home of Arlecchino, Pantalone, Pulcinella and all of Italy’s best loved traditional masks, brought on stage human stereotypes (greed, vanity, cunning…) and associated them often to a regional image, creating those visual and linguistic connections we still appreciate today.

The creation and production of masks became a trade in its own right: they were produced and sold also for other celebrations and often used, especially in the 17th and 18th centuries as beautiful instruments of seduction by noblewomen and courtisans alike. In France, Carnevale even managed to survive the mores-wiping effect of the Revolution and enjoyed a blooming period of popularity during the years of Romanticism, between 1820 and 1850.

Traditional Carnevale is still very much alive in Italy, where every town and village like to celebrate with, at least, one evening of dressing up and dancing. It is, however, very much lost everywhere else in the world, except of course, for the big Carnivals of Rio or New Orleans, Nice, London and Munich. In Italy, we know it, Venice and Viareggio are Queen and King of Carnevale, but are far from being the only cities where beautiful celebrations are organized.

Time to get to know more about it.

The Carnevale of Ivrea is known especially for its battaglia delle Arance and is considered one of the main cultural institutions of the town. In its essence, it is the re-enactment of a historical event that took place in the Middle Ages, when Ivrea was controlled and exploited by a series of tyrannical feudatory lords. The people of Ivrea rebelled against them and managed to obtain more freedom. Of course, historical reality took a different, more romantic shape throughout the centuries: the people of Ivrea were transformed into one, courageous (and beautiful) young woman, who fought against a tyrannical lord and his right to exercise the ius primae noctis, a Medieval law according to which the lord of a land had the right, after the marriage of any couple living on its territorial possessions, to pass the first night under the conjugal roof with the bride.

Violetta, the young daughter of a miller, rebelled against this and, once in the local castle of San Maurizio to spend the night with her rich abuser, killed him with a knife she hid in her hair. This gave start to a popular rebellion which ended tyranny in the area. The battle of the oranges is the symbol of that very rebellion, with the various areas of the town (rioni) fighiting against each other from their floats, some representing the lord’s army, some the people of Ivrea.

The Battaglia delle Arance takes place between the last Sunday of Carnival and Mardi Gras, and is the climax of all celebrations. It is usually followed by the distribution of a meal of polenta and cod in rione Borghetto, an area of the town, symbol of the frugality of Lent’s meals.

The Carnevale of Cento, in the province of Ferrara, is another historical Carnival of Italy. Its origins can be traced back as far as the 17th century, as its celebration was depicted by local painter Gian Francesco Barbieri “Guercino” in many of his frescoes. Centered, very much like its famous brother, the Carnevale di Viareggio, on majestic, colorful floats, Cento’s Carnevale used to take inspiration from traditional fables and local tales for their creation. Since the period between the two wars, however, public figures and famous personalities became favorite subjects. The Carnevale di Cento has its own king, Tasi, a figure inspired by a real person, Luigi Tasini, who, since the beginning of the 20th century, has represented the spirit and beauty of the Carnival.

The Carnevale di Foiano is one of the oldest in Italy: it will celebrate this year its 480th edition. It is rightly considered one of the most important Carnevali in Italy, both for the beauty of its choreographies and floats and for its historical relevance. The whole celebration revolves around a competition, ideated in the 1930s, among four different cantieri (literally, building sites, in this case… float building sites!): those of Azzurri, Bombolo, Nottambuli and Rustici. Each produces complex, beautiful, majestic floats, which parade in front of a jury formed by some of the best known art critics of Italy. The floats are magisterial works of mechanics and art. Their dimensions, strictly regulated by official regulamentations, can reach 17 mt in length, 10 mt in width and 13 mt in height (56 ft x 33 ft x 43 ft).

King Giocondo is Foiano’s best loved mask: it is him to open each of the Sunday Parades throughout the Carnevale, followed by the main floats, people in costumes and musicians, until the last day of festivities, when its effigy is burned during the spectacular ceremony of the rificolonata.

The Carnevale di Putignano, in Puglia, is probably the most popular Carnevale in the South of Italy. Considered the Carnevale that lasts for more days, it is rich in traditions, rituals and events. Apparently, or so legend says, the first Carnevale in Putignano was celebrated in 1394. What characterizes Putignano is its symbol, Farinella. Farinella is a mask, a character created in the 1950s by Mimmo Casale, a graphic artist; she takes her name from a typical rustic dish of the area, made with chickpeas and barley flour.

One last mention should be made about the celebrations of Carnevale in Milan. The dioceses of Milan is the only one in the world not following the Roman Liturgical calendar for Easter, but its own, called Ambrosiano, after the patron saint of the city (and Father of the Church) Saint Ambrose. In the Ambrosian Calendar, Carnevale lasts four days longer, because Lent does not start on Ashes Wednesday, but on the first Sunday of Lent. Tradition says it is this way because Ambrose, when bishop of Milan, was called away from the city around the end of Carnevale and was to miss Ashes Wednesday with his congregation. To avoid that, he asked to postpone the liturgy for the beginning of Lent to the following Sunday, when he was to return. True or not, the liturgical calendar of Milan and its dioceses was changed forever, and so the length of Milan’s Carnevale.

Check out our other articles dedicated to Carnevale: see some beautiful masks from Venice Carnevale, or read about Carnevale’s typical food, its traditional masks and vocabulary.