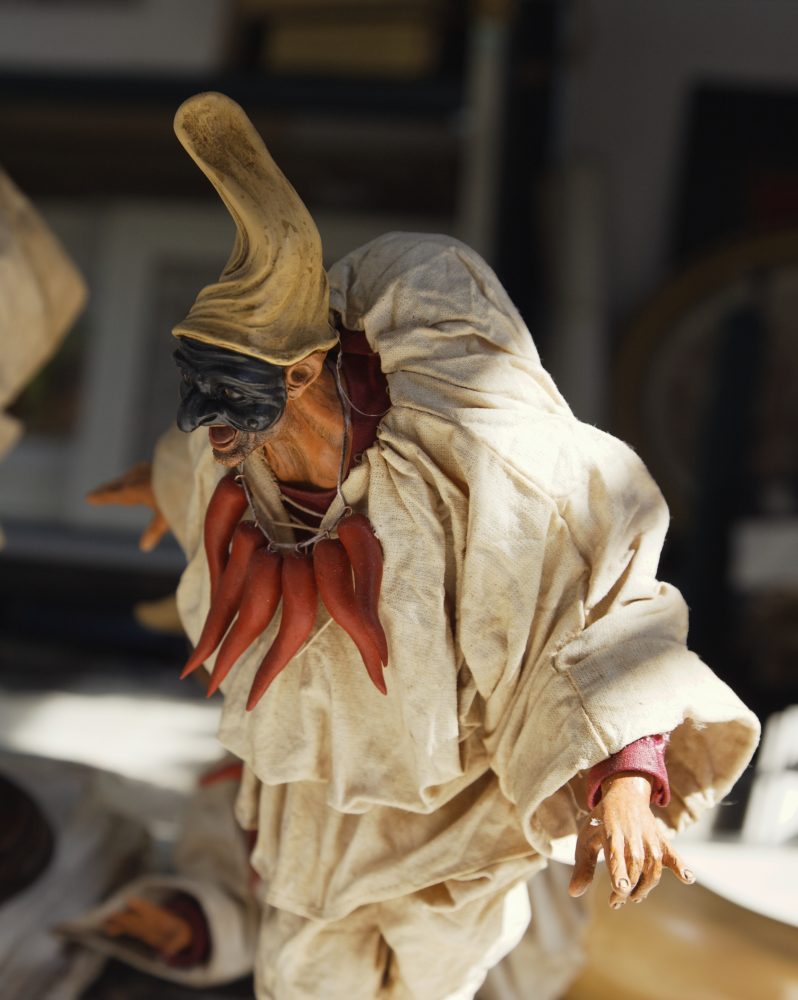 Carnival is the Italian celebration of fancy dressing, fun and tricks, following the famous saying “A carnevale ogni scherzo vale” (At Carnival, every prank goes). Everybody, young and old alike, decides to wear a costume and hide their face behind a mask.

Although it is frequent, nowadays, to dress up as modern celebrities and politicians, Italian culture is famously rich in historical masks that have become real characters reflecting popular and cultural traditions. Pulcinella is probably the most famous of them all.

Pulcinella was born in Naples, in the South of Italy, during the second half of the XVI century. It was invented by the actor Silvio Fiorillo, for the Commedia dell’ Arte.

This mask, however, roots its origins in an even more distant past, as it recalls some characters of Latin fables. By analyzing the etymology of the name Pulicinella, as it is called in Neapolitan, we immediately think about the Latin word “pullicinellus“,  a character created by Horace. The galletto, who had some physical features which made him look like a cockerel – a hump and a sharp nose, for instance – was also known for his awkward behavior. These are all traits that Pulcinella inherited from his Latin ancestor.

The fact that linguists came to associate the name Pulcinella to a pulcinello, a little chick, seems to prove the Roman origin of Pulcinella himself; however, others are more inclined to believe the mask was inspired by a theatre jester actor named Puccio d’Aniello.

The origins of the mask, the etymology of its name and the inspiration for its creation still remain very much a mystery, albeit the distinguishing features of the character are well outlined and have changed very little throughout the centuries. Pulcinella is renowned for his clothes: a large white shirt and white trousers, a black belt on his waist, black shoes, a white hood and a black mask covering his face. He has a curved nose and some wrinkles on his forehead that gives him a funny expression.

Apart from being a very famous Carnival mask, what makes Pulcinella really interesting are his social and cultural components: his figure and behavior are so well established  that his name is often used to describe real people bearing the same traits. Pulcinella is a lazy and sneaky servant, who walks in an awkward way, gesticulates excessively and tends to show his happiness by outlandishly dancing, hopping and shouting. He likes living life day by day, exploiting every situation, often pretending to be poor, or rich or a thief, depending on what his aims are. He is spontaneous, simple, friendly, funny, talkative, adventurous, melancholic, feisty and very unreliable.

The true meaning of Pulcinella, though, is deeper and goes beyond his appearance: he represents metaphorically the conditions of Naples’ lower classes, who rebel against the aristocracy after having been abused and humiliated. He delivers, indeed, quite a strong social message to his public. What makes him so popular and special, though, is the way he decides to rebel: with irony and a smile on his face.

He truly represents the essence of  lower classes and embodies their will of revenge. Curiously enough to tell, Pulcinella acquired international fame thanks to the diffusion of the Commedia dell’ Arte in the rest of Europe, where he became Polichinelle in France, Kaspar in Germany and Punch in England.

The character of Pulcinella is so famous that he was performed by more than sixty actors from 1500 to 1954.

The influence of Pulcinella in language interaction: an extension of his meaning

Pulcinella has marked so deeply the social, cultural, historical and popular life of the country that his name has started to be used as a way to identify certain types of behavior, and a particular kind of personality. In fact, the word Pulcinella has moved from the theatre to everyday’ s life, as it is used in some particular Italian expressions. Here are some of the most known:

Pulcinella – By extension, the name is used not only to designate the mask, but also to refer to a person who is not considered reliable and coherent. Related to it, we also find the expression comportarsi da Pulcinella, to behave like Pulcinella;

Il segreto di Pulcinella – this expression is used to refer to a secret that is not a secret at all, despite all attempts to hide it. The equivalent expression in English would be: “it’s an open secret!”

Always remember, when you see the mask of Pulcinella, that you are not in front of a mere Carnival character, but of the very personification of strong social and cultural aspects, so much so his figure and personality have influenced our social life and our language.

Also look at this article on Italian Carnival masks